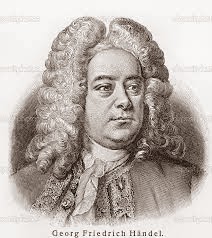 Most people know of George Frideric Handel because of his oratorio, The Messiah...and the Hallelujah Chorus. Handel was, however, a prolific composer in the early 18th century

The video below is a bit of his Royal Fireworks Music. This particular video features actual baroque instruments like natural trumpets, corni da caccia, and baroque oboes. Using period instruments means that you'll hear notes played a bit out of tune, especially by the brass since baroque brass instruments had no valves and could only play the notes in a harmonic series.

The Royal Fireworks was a commission by King George II. The online Britannica explains...


When England’s King George II commissioned Handel to write music celebrating the Treaty of Aix-la-Chapelle (1748), he specified that the piece should be played by a military band without stringed instruments. Handel complied with the king’s request, scoring the music for 9 trumpets, 9 horns, 24 oboes, 12 bassoons, 1 contrabassoon, 1 serpent, 6 kettledrums, and 2 side drums, but he later added strings for the first indoor performance.

Acknowledging the occasion for which the piece was composed, Handel attached descriptive titles to the two central movements: the third movement is called “La Paix” (“The Peace”) in honour of the treaty itself, and the fourth is called “La Réjouissance” (“The Rejoicing”) to commemorate the mood of elation that followed.