DON'T LOOK BACK, SOMETHING MIGHT BE GAINING ON YOU 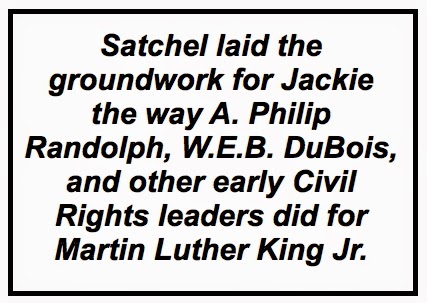 Paige played professional baseball in the Negro Leagues and, after Jackie Robinson broke the "color barrier," the Major Leagues. He was elected to Baseball's Hall of Fame in 1971.

According to some biographers, historians, and himself, Paige was the winningest pitcher in baseball history.


Satchel Paige threw his first pitch in professional baseball in 1926 for the Chattanooga White Sox, an inappropriately-named team in the lower levels of the segregated Negro Leagues. He played his last game in organized baseball in 1966 – a full 40 years later – for a Virginia club called the Peninsula Pilots. In between, the Hall of Famer pitched more baseballs, in more ballparks, for more teams, than any player in history. It also is safe to say that no pitcher ever threw at a higher level, for longer, than the ageless right-hander with the whimsical nickname.


According to some accounts, Paige compiled 31 wins against just four losses in 1933, and also accumulated streaks of 64 consecutive scoreless innings and 21 straight victories. Paige insisted that he kept his own records and reported pitching in more than 2,500 games and winning 2,000 or so, as well as playing for 250 teams and throwing 250 shutouts, staggering numbers when compared to those of Major League pitchers. 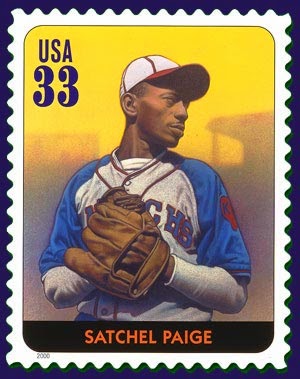 He wasn't happy about not being the first black player in the Major Leagues. He had been vocal about the segregated game for most of his career. Still, he eventually accepted that, as an older player, he wouldn't have been the best choice to break the barrier.


When Branch Rickey signed Jackie Robinson, a former teammate of Paige, Paige realized that it was for the better that he himself was not the first black player in major league baseball. Robinson started in the minors, and had a major league team started him in its minor league affiliate, Paige would have probably seen this as an insult. Paige eventually realized that by integrating baseball in the minor leagues first with Robinson, the white major league players got the chance to "get used to" the idea of playing alongside black players. Understanding that, Paige said in his autobiography that, "Signing Jackie like they did still hurt me deep down. I'd been the guy who'd started all that big talk about letting us in the big time. I’d been the one who'd opened up the major league parks to colored teams. I'd been the one who the white boys wanted to go barnstorming against." Paige, and all other black players, knew that quibbling about the choice of the first black player in the major leagues would do nothing productive, so, despite his inner feelings, Paige said of Robinson, "He's the greatest colored player I’ve ever seen."


The truth is that Satchel Paige had been hacking away at baseball’s color bar decades before the world got to know Jackie Robinson. Satchel laid the groundwork for Jackie the way A. Philip Randolph, W.E.B. DuBois, and other early Civil Rights leaders did for Martin Luther King Jr. Paige was as much a poster boy for black baseball as Louis “Satchmo” Armstrong was for black music and Paul Robeson was for the black stage – and much as those two became symbols of their art in addition to their race, so Satchel was known not as a great black pitcher but a great pitcher. In the process Satchel Paige, more than anyone, opened to blacks the national pastime and forever changed his sport and this nation. 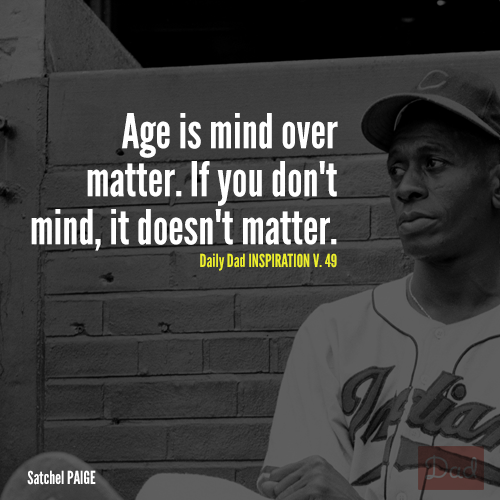 On September 25, 1965, at the age of 59, he pitched 3 scoreless innings for the Kansas City Athletics in a game against the Boston Red Sox. In those three innings he gave up one hit, to future Hall of Famer Carl Yastremski, and struck out one.


...On September 25, 1965, Paige’s three innings for the Kansas City Athletics made him, at 59 years, 2 months and 18 days, the oldest pitcher ever to play a game in the major leagues. Before the game, Paige sat in the bullpen in a rocking chair while a nurse rubbed liniment into his pitching arm for the entire crowd to see. Any doubts about Paige’s ability were put to rest when he set down each of the Red Sox batters he faced except for Carl Yastremski, who hit a double.

'AIN'T NO MAN GOT TO BE COMMON'

Known as much for his personality as his pitching ability, Paige is given credit for a variety of sayings, most notably...


"Don't look back. Something might be gaining on you."


"Age is a question of mind over matter. If you don’t mind, it doesn’t matter."
"Ain’t no man can avoid being born average, but there ain’t no man got to be common."
"Don't pray when it rains if you don't pray when the sun shines."
"How old would you be if you didn't know how old you are?"
"Money and women. They're two of the strongest things in the world. The things you do for a woman you wouldn't do for anything else. Same with money."
"Work like you don't need the money. Love like you've never been hurt. Dance like nobody's watching."
"You win a few, you lose a few. Some get rained out. But you got to dress for all of them."

Maybe I'll Pitch Forever by Leroy Paige as told to David Lipman, 1993
Satchel Paige by Larry Tye
"If You Were Only White": The Life of Leroy "Satchel" Paige by Donald Spivey, 2013
Satchel: The Life and Times of an American Legend by Larry Tye, 2010
Satchel Paige