The Case Against "reformers"

Three recent articles did a nice job of summarizing the problems facing public education in the U.S. They add to the already strong case against the so-called "reform" movement.
The ultimate goal of most "reformers" is, apparently, the privatization of America's public schools rather than improved student achievement. "reformers" use a variety of tools to achieve that goal...tools like union busting, overusing and misusing tests, transferring funds from public to private hands through vouchers, charters and virtual charter schools, political manipulations -- such as the recent takeover of the responsibilities of the Indiana school chief, Glenda Ritz (and her DOE) by the Indiana State Board of Education and Governor Pence (see HERE and HERE), funding cuts, school closings, deprofessionalizing the teaching profession by inserting untrained amateurs like Teach For America temps into public schools, general political propaganda, and buying state and federal politicians.
The one thing that the "reformers" don't have is a research basis for the changes they champion. 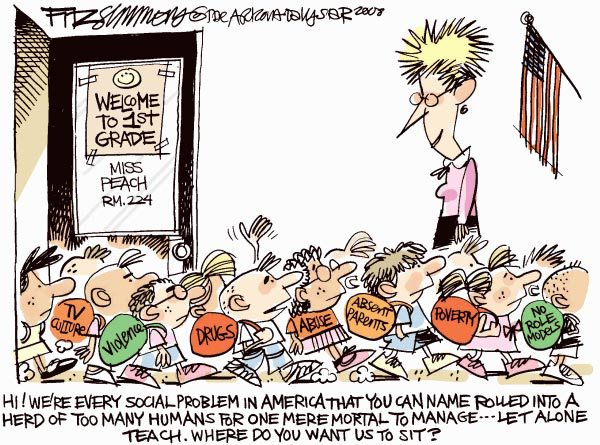 The Vergara decision: The big picture


Our unspectacular international test scores are the result of poverty, not teaching quality: The US has the second highest level of child poverty among all 34 economically advanced countries (23%, compared to Finland’s 5%). When researchers control for the effect of poverty, American scores on international tests are at the top of the world.

There is no evidence that Teach for America teachers do better, no data supporting flipped classrooms, and no data showing that less experienced teachers are better. Evaluating teachers using test-score gains is inaccurate: Different tests produce different ratings, and a teacher’s ratings often vary from year to year.

Firing teachers based on unreliable measures, eliminating tenure (really due process), and devaluating experience will reduce the number of teachers. They will be replaced with unproven technology, a boondoggle for computer companies but a disaster for students.

Paul Buchheit continues the assault on the "reformers" misrepresentations...


1. Privatization takes from the poor and gives to the rich.
...The salaries of eight executives of the K12 chain, which gets over 86 percent of its profits from the taxpayers, went from $10 million to over $21 million in one year...Head Start was recently hit with the worst cutbacks in its history...Spending on K-12 public school students fell in 2011 for the first time since the Census Bureau began keeping records over three decades ago.

2. Testing doesn’t work.
..."The tests that are typically used to measure performance in education fall short of providing a complete measure of desired educational outcomes in many ways"...With regard to teacher evaluation, the American Statistical Association reported that Value-Added Assessment Models "are generally based on standardized test scores, and do not directly measure potential teacher contributions toward other student outcomes."...

3. The arts make better scientists.
...A comprehensive study at Michigan State University found that "success in science is accompanied by developed ability in other fields such as the fine arts."...

4. Privatization means unequal opportunity for all.
...A National Education Policy Center study found that charter schools, in comparison to nearby public schools, were substantially more segregated by race, wealth, disabling condition, and language. The Civil Rights Project at UCLA shows that "segregated schools are systematically linked to unequal educational opportunities."...

5. Reformers are primarily business people, not educators.
...Billionaires like Bill Gates and Eli Broad and Michael Bloomberg and Rupert Murdoch and the Walton family, who have little educational experience among them, and who have little accountability to the public, are promoting education reform with lots of standardized testing. As already noted, the writers of the Common Core standards included no early childhood educators or experienced classroom teachers. More than 500 early childhood educators signed a joint statement rejecting the standards as inappropriate for children in the early grades...[emphasis added]

People like Jeb Bush, Arne Duncan and Bill Gates, who don't know anything about education are having a huge impact on America's public schools. Unfortunately they rarely listen to, or purposely ignore, actual practitioners and researchers. 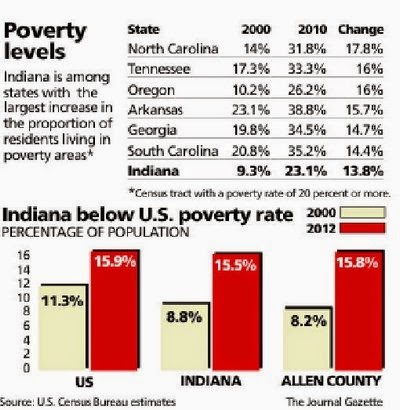 Linda Darling-Hammond is an experienced educator with more than 40 years of experience in public education and educational research. She maintains that teachers in the U.S. are prevented from doing their jobs. High achieving nations treat teachers with more respect, allow teachers to do what they were trained to do, give teachers time to collaborate, and provide sufficient resources.

In addition, the fact that nearly a fourth of America's children live in poverty creates special difficulties that higher achieving nations don't have. Our high poverty children are more at risk because our social safety nets are less adequate than in other developed countries. We have more children without health care. We have more children living with food insecurity. We have more homeless children. We spend less money on our students who live in poverty than we do for our wealthy students. Teachers who work with high poverty students have enormous challenges to overcome and are given fewer resources.


...American teachers today work harder under much more challenging conditions than teachers elsewhere in the industrialized world. They also receive less useful feedback, less helpful professional development, and have less time to collaborate to improve their work. Not surprisingly, two-thirds feel their profession is not valued by society -- an indicator that OECD finds is ultimately related to student achievement...

...Address inequities that undermine learning: Every international indicator shows that the U.S. supports its children less well than do other developed countries, who offer universal health care and early childhood education, as well as income supports for families. Evidence is plentiful that when children are healthy and well-supported in learning in the early years and beyond, they achieve and graduate at higher rates. The latest PISA report also found that the most successful nations allocate proportionately more resources to the education of disadvantaged students, while the United States allocates less. It is time for the U.S. finally to equalize school funding, address childhood poverty as it successfully did during the 1970s, institute universal early care and learning programs, and provide the wraparound services -- health care, before- and after-school care, and social services -- that ensure children are supported to learn....

Redesign schools to create time for collaboration: OECD studies show that higher-performing countries intentionally focus on creating teacher collaboration that results in more skillful teaching and strong student achievement. U.S. researchers have also found that school achievement is much stronger where teachers work in collaborative teams that plan and learn together....

Create meaningful teacher evaluations that foster improvement: All U.S. teachers stated that formal appraisal is used in their schools, based on classroom observations; feedback from parents, guardians, and students; and review of test information. This is not very different from the TALIS average. What is different is the nature of the feedback and its usefulness. American teachers found the feedback they received to be less useful for improving instruction than their peers elsewhere...

We cannot make major headway in raising student performance and closing the achievement gap until we make progress in closing the teaching gap. That means supporting children equitably outside as well as inside the classroom, creating a profession that is rewarding and well-supported, and designing schools that offer the conditions for both the student and teacher learning that will move American education forward.

We have lost our way as a society. We've lost the ability or the desire to do what's right for the children of our nation, and our nation is, and will be poorer for it. Susan Zimmerman, in Comprehension Going Forward, said it best.


"Somewhere along the line we've forgotten that education is not about getting this or that score on a test, but it is about enlarging hearts, minds, and spirits. It's about fulfilling human potential and unleashing human creativity. It's about helping children understand that the world is a place full of wonder, truly wonder-full. It's about giving children the tools they will need to participate in a complex global world where we can't imagine today what the next twenty years, let alone century, will bring."