Indiana's big education news this week has been the release of the 2014 ISTEP scores. No surprises here...

Carmel-Clay and Zionsville public school corporations (Free and Reduced lunch populations under 10% and LEP under 5%) scored the highest.

The articles below (and most of the others I've seen) focus on the test scores, old standards, new standards, higher scores, lower scores, charter school scores, private school scores, and all are written with the underlining assumption that standardized tests are adequate measures of student achievement. They equate learning with test scores.

The insane focus on standardized test scores in the U.S. hasn't changed a bit since President Bush II signed No Child Left Behind into law surrounded by smiling suits filled with both Democrats and Republicans -- but no teachers.


Of all the chasms that separate one world from another, none is greater than the gap between the people who make policy and the people who suffer the consequences. There are those who reside comfortably on Mount Olympus, issuing edicts and rhetoric, and then there are those down on the ground who come to know the concrete reality behind the words...it’s the difference between important grown-ups who piously exhort us to hold our educational system “accountable” and a nine-year-old who has come to detest school because the days are now full of practice tests in place of projects and puzzles. Up there: people pounding the pulpits about the need for World-Class Standards. Down here: little kids weeping, big kids denied diplomas on the basis of a single exam score, wonderful teachers reduced to poring over the want ads...

And once you realize that the tests are unreliable indicators of quality, then what possible reason would there be to subject kids – usually African American and Latino kids -- to those mind-numbing, spirit-killing, regimented instructional programs that were designed principally to raise test scores? If your only argument in favor of such a program is that it improves results on deeply flawed tests, you haven’t offered any real argument at all. Knock out the artificial supports propping up “Success for All,” “Open Court,” “Reading Mastery,” and other prefabricated exercises in drilling kids to produce right answers (often without any understanding), and these programs will then collapse of their own dead weight. 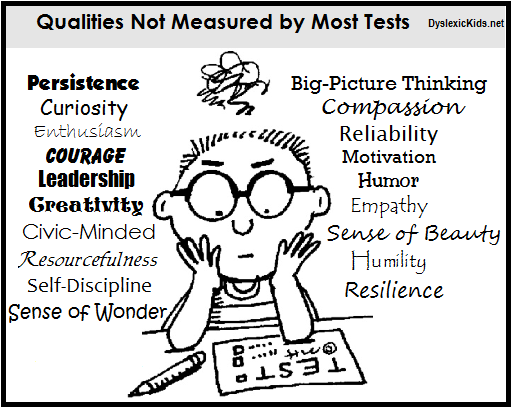 
Carmel-Clay Schools once again scored the highest among school corporations...

Indianapolis Public Schools...51.6% of students passed both portions of the test


The scores at EdisonLearning's Gary Roosevelt continue to falter. EdisonLearning is a private management company appointed by the state to operate the high school. The Indiana Department of Education graded the school an F in 2013.

Privatization Watch is a great blog to watch. Public education isn't the only target of privatizers.

Here are some items from the last few weeks of Privatization Watch...

Fixing something that isn't working right makes sense. If public schools are "broken" (an assumption which I don't believe is true to the extent that privatizers do), then they should be fixed...not closed or sold to private corporations. 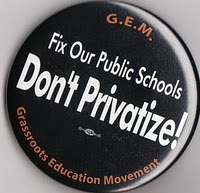 Rather than privatize, fix public schools


The solution should not be to outsource our children's education to institutions that care more about the bottom line or resist accountability. The solution should be to address and fix our problems, many of which were created by individuals and politicians who seek to privatize our schools and profit off our children.


A public school defender's tactics should certainly include conventional weapons, such as union organizing, protests, civil disobedience, legislative, electoral and judicial processes. But conventional weaponry alone cannot beat back an insurgency. School-based educators especially must focus on non-combative, ally-building approaches: tactics that foster personal connections between the local populous and their public schools.

Hedge fund managers, corporate shills, ALEC, and other private sources don't want the public to know that they are fostering the destruction of America's public education. "Corporations are people, too, my friends" is making it easy for billionaires and tax-freeloading corporations to buy up America's infrastructure.


Using Brown’s logic no political contributions should be made public for fear that people will be criticized for funding candidates and initiatives others find objectionable. The rich and powerful should be able to buy elections and candidates freely – that’s none of the public’s business.

Rarely is the backwardness and venality of the movement to privatize public education made so obvious.

Private companies running charter schools is wrong. The idea behind public schools and public school boards is that public accountability is important. Luckily this group is being investigated.


FBI agents raided a Bond Hill charter school in June as part of an ongoing federal investigation into whether Horizon Science Academy Cincinnati, its sister schools in Ohio and two other states, and its management company outside Chicago had improper relationships with several technology vendors.

Textbook publishers don't publish different books for every state. Instead, they focus on the states with the largest markets and publish books that will sell there. Texas is one of the nation's biggest markets and the right wing faction of the state school board always makes it difficult for the rest of us.

In 2002, these folks decided that a free, public education is an entitlement, and is therefore unacceptable. One wonders if these folks want to start charging admission to public parks or libraries. The rabid anti-taxers don't believe that government has any purpose whatsoever...It's a selfish, anti-community attitude. According to them we're not "all in this together." Instead, it's "every man for himself." The social studies text books are up for revision this year. I don't doubt that the same sort of lunacy will prevail (Think I'm wrong? Take a gander at the Texas GOP platform for this year).


A publisher agreed to delete “In the United States, everyone has a right to free public education” from a textbook after a critic argued that the sentence suggested education is an entitlement. 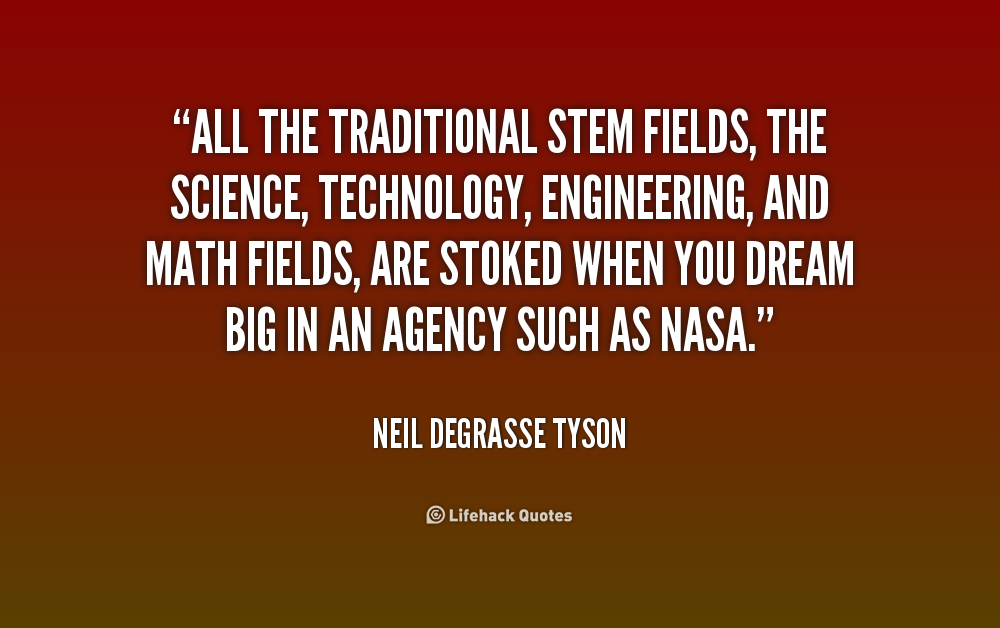 Do You Know The Silly Reason Why America Put A Man On The Moon? Do You Know Why We Stopped Going?


"The NASA budget is four-tenths of one penny on a tax dollar." If I held up the tax dollar and I cut - horizontally into it - four tenths of one percent of it's width, it doesn't even get you into the ink. So I will not accept a statement that says, "we can't afford it."

Do you realize that the $850 billion dollar bank bailout - that sum of money is greater than the entire 50 year running budget of NASA? And so, when someone says, "We don't have enough money for this space probe." I'm asking, "No. It's not that you don't have enough money." It's that the distribution of money that you're spending is warped in some way that you are removing the only thing that gives people something to dream about tomorrow.