More Than a Test Score


Scores were slightly lower across the board this year for a statewide test that measures third-graders’ reading ability, data released Friday show.

The test passing rates for each Allen County, Indiana public school system, as well as the rate from last year, were listed...

So all four public school systems in Allen County "mirror" the state's drop in IREAD-3 scores. The declines are small...but are they significant*? We're not told. We're also not reminded that the students who took the test in 2014 are not the same children who took the test in 2015 and therefore comparisons between the two are questionable.

[*Significance, validity, and reliability actually mean something when we're discussing standardized tests and using the results to label, blame, and punish. Do members of the Indiana state legislature, members of the state board of education, or the governor know what they mean?]

An interesting, yet consistent fact is the highest scores in the county were made by the two school systems with the lowest free and reduced lunch rate, a standard measure of school/child poverty level. SACS has free/reduced rates of 11.3%/3.6% and NACS has free/reduced rates of 11.3%/6.1%. FWCS and EACS have rates of 57.9%/8.2% and 42.5%/7.4% respectively.

Does the IREAD-3 test measure reading achievement, or socio-economic status?

The pattern is similar state-wide. There are a few outliers, but in general the pattern of low poverty schools scoring high, and high poverty schools scoring low, is consistent. For example, 99.3% of third graders in North West Hendricks Schools, with a free/reduced rate of 13.5%/6.6% passed IREAD-3. By contrast, only 53.7% of third grade students in Indianapolis Public Schools passed, with a free/reduced rate of 72.4%/3.4%.

Feel free to check out some yourself...you can find the free/reduced rates of Indiana's school systems, and schools here:

And a list of the IREAD-3 pass rates here:

Take a look at cities like Gary, South Bend, and East Chicago, compared to a place like Carmel or Porter Township.

What exactly does the IREAD-3 test measure?

According to the Indiana DOE web site, the purpose of IREAD-3


is to measure foundational reading standards through grade three.

Looking through the web site we can't find much about the validity* and reliability* of the test, however, which would seem to me to be fairly important, considering that third graders can be forced to repeat third grade reading instruction if they don't pass.

Indeed, I'm not the only one who has had trouble finding this information. Indiana Parents For Fair Testing also couldn't locate information about the validity and reliability of IREAD-3.


IREAD-3 has been inadequately piloted prior to its use. With no public information available about the test’s validity or reliability, parents can not evaluate whether or not the test does what it purports to do.

Is the IREAD-3 valid and reliable? Perhaps. Like other standardized tests published recently, we'll have to take their word for it because it's illegal to see the tests and review them. Without established validity and reliability how do we know that IREAD-3 measures what it purports to measure?

Returning to the Indiana DOE web site, we see that a passing score on IREAD-3 is a score of 446. One would hope that classroom teachers get more information than this...although, with only a few days left to the school year it's not clear what Mr. Smith, for example, can do for Sally who got a score of 425. She's either going to have to take third grade reading instruction again (if it didn't work the first time what changes are going to be made to have it work next time?) or retake the test during the summer window (June 1 through July 24) after somehow learning what she didn't learn the first time.

Indiana no longer provides funding for remediation. That money now goes to pay for more testing. Mr. Smith could volunteer to tutor Sally, Sally's parents could pay him to tutor her, or send her to another tutor...but, perhaps, like many low scoring children, Sally's parents haven't got the money to pay someone to tutor her. What then?

In the meantime, Sally, along with other Hoosier children, are labeled as failures and will have to repeat instruction or repeat a grade (which doesn't work).


HOW ABOUT THIS INSTEAD...
That would be a start. 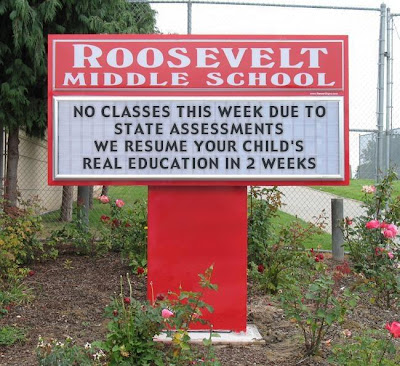 
Thank you for the shout out, Stu. We must end this automatic retention nonsense.