No need to test every student


There is no need to test every student every year. We can get the same information from low-pressure testing of small samples of students, each student taking only a part of the test, and extrapolating the results to larger groups, as is now done with the NAEP test. This will save money, reduce anxiety, and give teachers more time to teach.

When you go to the doctor, they don't take all your blood. They only take a sample. 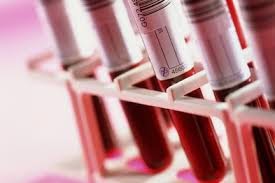 Learning isn't supposed to make you sick. Stress is not always negative...except when it is...and the stress associated with high stakes tests for children beginning at about age 8 is bad. Why do we do this to our children?


"Something is wrong with our system when we just assume a certain number of students will vomit." 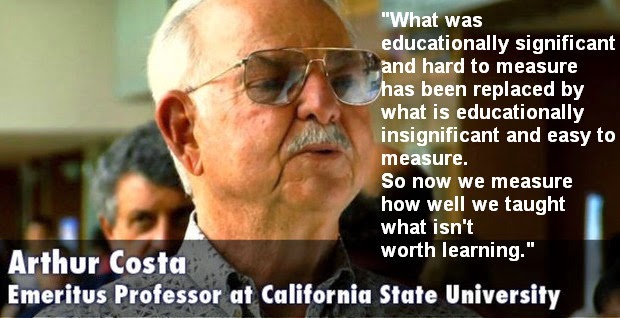 Thank you to Stephen Colbert for helping the children of South Carolina. But why should he have to? Why isn't the education of our children a big enough priority for us to fully fund?


It will be a great day when our schools get all the money they need and Stephen Colbert has to buy the Air Force a bomber.

We need to invest in our public schools...not private charter schools operating without public oversight.


Imagine if this board and administration were willing to invest in our own schools, our own students, our own leaders, and our own teachers in the same manner in which we keep investing IN OUTSIDE ENTITIES.

(Phalen Academy will be receiving at least 1.2 million dollars more than school 103 received to educate the same children.) 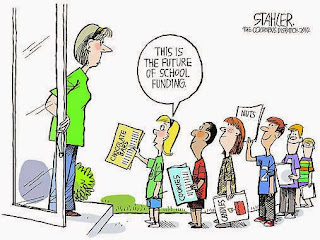 Testing: Who is Advocating for the Students?

Many good, dedicated, inspirational teachers are leaving the profession in large numbers. We're driving the best out of the profession.

From an Indiana Teacher


"I still love teaching and working with young children, but the testing and culture are killing the profession..."

Take a look around: Barack Obama, Arne Duncan, George W. Bush, Margaret Spellings, Bill Gates, the Walton Family, Michael Bloomberg, Jeb Bush...these "reformers" don't know anything about the day to day business of public education. Yet they have, over the last couple of decades, tried to buy  expertise and tell teachers what they are doing wrong.


...when you know how to think it empowers you far beyond those who know only what to think.


At a recent talk, a girl walks up to the microphone and asks the astrophysicist if there are people with dyslexia in his field. Tyson explains that yes, there are, as well as colleagues with a number of other types of learning disabilities. Citing autism, dyscalculia and ADD as examples, Tyson explains that rather than seeing these conditions and disorders as a hindrance, they are empowering.

“The answer is yes, but it’s a hurdle,” Tyson says. “But in the Olympics, what do you do when you come up to a hurdle? You jump over it.” 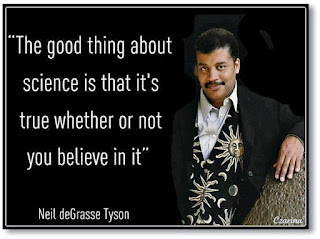 We Have To Do Something

My Random Quotes pages wouldn't be complete lately without something from blogger extraordinaire, Peter Greene. Here he reminds us that the object is not just "to do something." We have to do something that makes sense. If something is harmful, doesn't work, or wastes time and money -- like our national high stakes testing obsession -- then we ought to stop doing it.


Even if we accept "We have to do something" as a Real Thing (which it isn't, because the "crisis" is manufactured, but even if), it does not follow that an urgent Need To Do Something means that we must urgently Do Something Stupid.

If the treatment is damaging, don't use it. If the food is harmful, don't eat it. And if the test is a bad test that wastes time and money, makes the students miserable, damages the credibility of the school, and returns no useful data-- then don't give it!!

What can retired teachers do? Help win a Supreme Court decision.


Who kept track of this injustice as they formed grassroots groups of people in addition to alerting, networking, goading, and educating while contacting unions and government agencies and media sources and legislators and social networking organizations?

The important quote from this blog post by Ken Previti...


“A hero is a man who does what he can.” – Romain Rolland