This is how Bernie or Hillary wins: The speech that would seal the nomination

Bertis Downs, a member of the Board of Directors of the Network for Public Education, wrote this for Salon. How many teachers and parents would support a candidate who promised that all public school children would get the education they deserved?

...John Dewey once said, “What the best and wisest parent wants for his own child, that we must want for all of the children of the community.” Well, under my administration, we will actually govern that way and foster the kinds of schools where we would all be proud to send our children. We all know the factors that make a school great: excellent teachers who are respected, compensated, and supported so they can better teach our children; a rich and varied curriculum that includes the basic academic subjects as well as the arts and physical education; safe and healthy learning environments; the school as a center of community; strong leadership that focuses on enabling educators to collaborate, develop, and improve as they teach; reasonable class sizes; and an active and engaged parent and community presence. These describe some of our best schools — both public and private. And these are the attributes our policies need to be building and sustaining, not undermining and discouraging. For too long, our policies have created a de facto parallel system — schools for the Haves and other schools for the Have-nots. We need to shift our thinking and try a different approach — one that strives to improve opportunities for all of our nation’s children, not just a select few. Put simply, we must redouble our efforts to expand on our schools’ existing strengths, while freeing teachers to teach and addressing the lingering inequality that presents challenges to teachers and administrators.

Congress passed the reauthorization to the Elementary and Secondary Education Act last December. The Every Student Succeeds Act returns much of the task of monitoring the nation's education system to the state. Testing, among other things (such as support for the for-profit charter industry), is still very much a part of the law. Here are two comments about the new law that focus on the same issue – poverty. No improved testing system is going to remove the effects of poverty on the huge number of students in America's public schools who live with unmet physical, medical, emotional, and social needs.

Why are none of the candidates for President talking about America's embarrassingly high child poverty rate?

Before we talk seriously about Every Student Succeeds ...

There are certain requirements


[ESSA is] not addressing the real issues related to poverty that are contributing to why those schools are struggling. Having less emphasis on testing, particularly if states use those resources to devise other means to support schools, will be helpful. But you still don't have federal or state strategies to address issues related to poverty and how they affect schools—that's a glaring omission. The origins of these federal policies were tied to President Johnson's war on poverty. Supplemental funds were sent to school districts serving poor children to compensate for issues related to poverty. Since the enactment of NCLB, the focus on mitigating poverty has been replaced by a focus on accountability as measured by test scores. 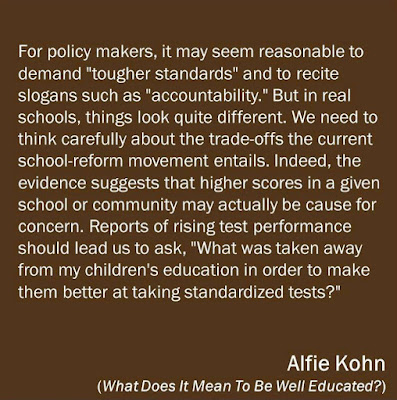 
Assessing new teachers with standardized achievement tests is likely to yield many false negatives. That is, the assessments would identify teachers early in their careers as ineffective in improving test scores, which is, in fact, often the case for new teachers. Two or three years later that could change. Perhaps the last thing we want to do in a time of teacher shortage is discourage new teachers while they acquire their skills.

Any teacher who teaches in a school filled with students who live in poverty will become "low scoring teachers." Why is the USA one of only three advanced nations on Earth investing more money in schools for the wealthy than in schools for the poor?

from University of Chicago Consortium on School Research


Researchers say, however, that they don’t know whether the discrepancies reflect true differences in the quality of teaching or that it’s just harder to be effective or get high marks in higher-poverty schools.

“They may reflect that it is harder to get high scores in unorganized, chaotic schools or in schools with few resources or instructional supports for teachers, as other studies have shown,” the report notes.

FOR THE PUBLIC GOOD

The following is from the introduction to the 50 State Report Card given by the Network for Public Education. Diane Ravitch repeats her oft quoted belief that public education is something that we have agreed to provide for all children of our society because it benefits all of us.

In their continuing effort to cause damage to the public education system, the Indiana House of Representatives has passed a bill, under the guise of easing the looming teacher shortage, which will allow school systems to pay some teachers more money, thereby reducing the amount of money available for everyone else. This is the latest attack on teachers by legislators who are hell-bent on hurting the Indiana State Teachers Association even if that means destroying public education in the process. The bill now goes to the Senate.

by Melanie Wright, music teacher and member of the Indiana House of Representatives


“If we make those salaries negotiable and outside collective bargaining, we will have salaries all over the place,” she said. “Our mid-level teachers will look for options to get out. They already are exhausted from all the mandates that have been put on them.”

Kudos to this superintendent who is determined that the damage caused by the legislature will not prevent his school system from providing the best education it can for its students.


“It’s not going to change what we do. We try to provide a healthy and safe learning environment that engages our learners in meaningful activities and supports them whenever learning becomes difficult and obstacles get in the way,” he said.

“Nothing’s going to deviate us away from that mission, and our primary focus at this point is not to look back on the past and all the issues that came across with the ISTEP+ and the transition to the new test and the new accountability standards and those kinds of things.”