THE SPEAKER IS WRONG

But the Speaker is wrong. Qualifications matter.

Why Indiana's education leader doesn’t have to be a teacher, according to Brian Bosma


Bosma has no problem with people who have a teaching license being superintendent of public instruction...

So the Speaker won't prevent someone with education credentials/experience from becoming SPI. Well, that's something, at least...


...but it shouldn’t disqualify somebody, he says.

Would Bosma expect the Superintendent of the Indiana State Police to have training and experience in criminal justice? The current holder of that position does have just such experience. He's a former State Trooper and County Sheriff.

How about the commissioner of the state's Department of Health? The current commissioner, Kristina Box, is a medical doctor and a Fellow of The American Congress of Obstetricians and Gynecologists.


“There may be people who are uniquely qualified through business or other experience to lead our schools in the state,” Bosma said. “Is the preference to have a license? Absolutely. Does a license, in and of itself, does make someone an outstanding leader for our state schools? I would say not necessarily.”

Bosma thinks that we don't need an educator as head of the Indiana DOE, just "preferable. It's true that some heads of departments in the state government are filled by attorneys or political science majors. And, I would even agree that an education degree doesn't necessarily make someone a good leader for the state schools...I'm looking at you, Tony Bennett.

Perhaps the Speaker is one of those people who believes that education should be run like a business. That's why anyone...an attorney or MBA would be a good fit. Or, since it's a government department he would probably be ok with a poli sci major (like former US Secretary of Education Margaret Spellings) or, again, an attorney.

Would Speaker Bosma hire someone for his private law firm who had no training or experience in the legal profession? How about his firm's office manager? Wouldn't he want to hire someone with office managerial experience? legal experience? Is a law office a specialized environment and someone working with attorneys should know something about how the law "industry" works? My guess is that the Speaker would say yes. My guess is that he would never hire anyone to his office without "experience in the field."

Why should it be different with education? Just because you "went to school" doesn't mean that you know anything about how to run a school, or how students should be taught.

A school is not a business. Schools can't decide to stop one, less-than-profitable product line while keeping only the profitable lines open. General Motors dumped Pontiac. But a school can't decide that this year's fourth graders, for example, aren't quite up to par, so the fourth-grade wing of the school needs to be closed. Children aren't pieces of machinery.


...we [in the public schools] can never send back our blueberries. We take them big, small, rich, poor, gifted, exceptional, abused, frightened, confident, homeless, rude, and brilliant. We take them with attention deficit hyperactivity disorder, junior rheumatoid arthritis, and English as their second language. We take them all. Every one.

The current Superintendent of Public Instruction is Jennifer McCormick, who is not running for reelection in part because she doesn't want to continue to be part of the mess that the legislature has made of the public schools in Indiana. She didn't actually say it quite that way. She said she wasn't running again because "...Indiana’s 'governance structure' is not healthy."


Perplexing but not surprising- people who are most judgmental & outspoken about the qualifications necessary to perform a job are typically those people who have never done the job. 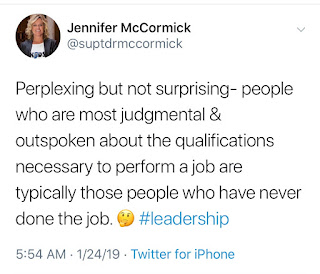 Gosh, Mr. Speaker, I wonder who she was talking to?

The Speaker is wrong.

...for the same reason that Indiana's Attorney General ought to be, and is, an attorney...

...for the same reason that the Commissioner of Indiana's State Department of Health ought to be, and is, a medical professional.

Education is a specialized a field. The State Department of Education is, and in the future ought to be, run by an education professional.

Email ThisBlogThis!Share to TwitterShare to FacebookShare to Pinterest
Labels: Bosma, IN Gen.Assembly, SPI