Indiana Representative David Ober has knocked the irony meter off its shelf. It seems he's against state supported preschool, claiming that we don't have anything "long term to show it's working." His objection is that we don't have enough data to show that universal preschool has a good "return on investment."

Silence, followed by votes to increase the privatization of Indiana's schools.


When it comes to early learning opportunities, Indiana children hear little more than excuses. The latest – “where’s the data to show it works?” – is the weakest yet.

“Right now we just don’t have the data. We have at most one year – we have nothing long term to show it’s working,” Rep. David Ober, R-Albion, told The Journal Gazette’s Niki Kelly. “My reticence from the beginning is ‘Does it work?’ and ‘Is there a return on investment?’ Some argue yes and some no.”

Ober voted against the preschool pilot program, which carries strict income limits. A family of four can earn no more than $30,290 to qualify for a pre-K grant. By contrast, a four-member household with income of as much as $83,000 a year can qualify for a K-12 school voucher.

The Noble County Republican supported a vast expansion in the voucher program in 2013, even though no data exist to suggest it offers any return on investment. Lawmakers have never authorized a study of the five-year-old private-school choice program.

Preschool Education and Its Lasting Effects: Research and Policy Implications

Here is an interesting research report for Ober to read. It explains the lasting effect of well designed, well staffed preschool programs.
And in case that's not enough, Rep. Ober, please see the following... 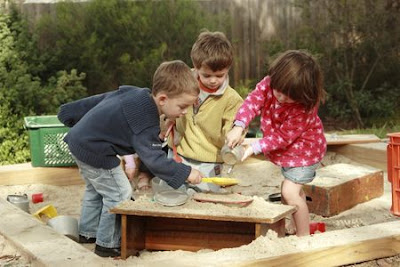 The people who were shouting "local control" (along with Republican Presidential candidate Trump) are the same people who are taking control of public education away from local municipalities and school boards.

The problem with Detroit's public schools goes from bad to worse...


LANSING -- Michigan's Emergency Loan Board on Monday approved measures to implement a $617-million financial rescue and restructuring plan for Detroit’s public schools, over the vocal objections of elected school board members and others who attended the meeting in Lansing.

There were shouts of "Shame!," "Jim Crow" and "Black lives matter" as the three board members left an auditorium at the Michigan Library and Historical Center through a back exit.

Attacking the Public in Public Education

The reasons our state constitution includes funding for "common schools" is because public education benefits everyone. The founders knew that. "Reformers" apparently don't.

Local public schools should be supported, not closed. Public funds should go to improving public schools for everyone, not sent to privately run charters or transferred to vouchers for parochial schools. Parents should not have to go shopping for schools like they shop for shoes.


The whole argument that choice-voucher systems should put all decision-making in the hands of parents makes a foundational assumption that education is not a public good, maintained by the public in the public space in order to deliver benefits to the public. Instead, it re-imagines education as a consumer good, created by a vendor and then handed off to the student while money changes hands. Where education might once have been viewed like air or water or other shared public resources, we're now encouraged to see it like a pizza or a toaster.

We can now start to see some of the side-effects of this view. When a public school is closed these days, it's not necessarily seen as a blow to the community, like the loss of a park or the pollution of a water supply. Instead, it's treated like a store closing, as if we just lost the Taco Bell on the corner, or the local K-Mart was closed up. It's a business decision made by someone who doesn't answer to the community, really pretty much out of our hands, right? 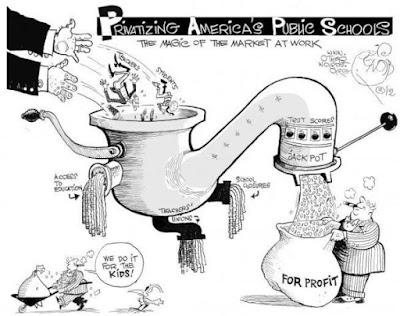 Bringing Back Some Teacher Control to Reading Instruction

Children are all different. One size doesn't fit all.


As teachers, we know our students better than anyone else. Yet in some schools, teachers are given curriculum and told to follow it with fidelity—meaning, do exactly what the teacher guide says and never veer. To compound this issue, principals and district personnel visit these teachers, observe their teaching, and criticize or punish them when the lesson hasn’t been followed verbatim. 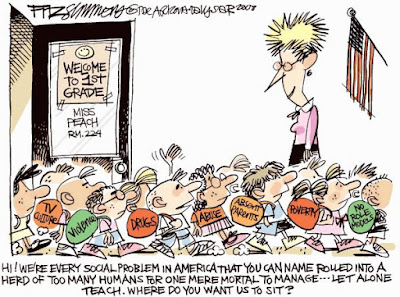 Michelle Rhee made her mark by claiming that unions allowed old teachers to keep teaching even if they were "bad." It turns out, however, that experience matters. Perhaps that's one of the reasons why schools in states with strong unions have higher achievement than schools in states with weak or no unions...and by the way...unions don't want bad teachers in classrooms any more than anyone else.


Nearly fifteen years of federal policy that essentially demands that teachers raise test scores or else face serious consequences, has, however, undermined the morale and reputation of teachers. Our society has been encouraged to blame teachers alone for failing to “produce” test score gains in the poorest communities, despite that we know that test scores are affected by families’ economic circumstances and that state governments with inequitable finance systems fail to support the teachers and students in the school districts whose needs are greatest.

Arizona...just one of many states (including Indiana) which punishes children for not learning.


Once again, parents are left to wonder why their children didn’t pass the test.
Whatever kind of learning problems exist, there are a variety of strategies and arrangements to assist students without making them feel like failures.

There is a large body of anti-retention research. But some states don’t seem to understand such research exists. Nor do they care for the feelings of their students, and when those students drop out years later, they will wonder why. Children who fail kindergarten through 3rd grade have a 75% chance of dropping out of school by tenth grade (Roderick, 1994). 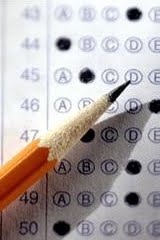 How Gov. Mike Pence worked to undermine the will of Indiana’s voters

Pence is an opportunist. First he was for preschool. Then he was against it. Now he's for it again. It's all in his politics and whether or not he believes it will help him get votes.


He also angered Ritz over his changing views on early-childhood-education funding. In 2013, he supported a move by Ritz to apply for federal funds for early-childhood education through President Obama’s Race to the Top competition. Indiana didn’t win but moved to apply again in 2014, with a better chance of success because the criteria had changed. Some $80 million was at stake. Pence suddenly changed his mind and refused to enter the competition, supposedly because of federal requirements that came with the money. Ritz said there weren’t any of significance.

In 2014, however, he did push for — and won — millions in state funding for a pilot prekindergarten program in the state. Then, last month, he decided federal money might not be so bad after all. He wrote a letter to Sylvia Mathews Burwell, the secretary of the Department of Health and Human Services, saying that he was interested in federal early-education grants under the new K-12 education law, the Every Student Succeeds Act. He said the pilot had worked well and that the state was now ready to use federal funds to expand it. 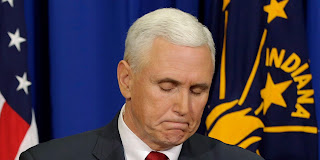