Oklahoma Educator Rob Miller who writes the blog, A View From the Edge, caught my attention with his post, The Olympic Celebration of Diversity. What would happen, Miller pondered in his thought experiment, if the stars we have seen in the Olympics, were placed in different events?


What if Bolt and Phelps changed places in the next Olympics? Imagine Michael on the same track as the other top sprinters competing in the 200-meter race? Can you see Bolt swimming next to the world’s best in the 100-meter butterfly?

His point is, of course, that nearly no one is good at everything. He then moves the analogy over to education...


We have told skilled young artists and musicians that they are not as valuable as other students because they scored lower on a math test. We have elevated certain teachers because they teach “important” subjects like math, science, and reading while devaluing the contribution of teachers of “less important” electives like the arts, music, drama, physical education, history, or computers.


The true mission of education is to help each child identify and nurture their natural strengths, interests and passions and then work to hone those attributes into marketable skills.


To say a student is not college- and career-ready because he or she cannot pass an Algebra test is like saying Michael Phelps is not an athlete because he cannot complete a gymnastics floor routine.

Both Diane Ravitch and Peter Greene commented on Utah's new rules for teaching...which don't require any training in pedagogy.


In a bold move to address the state’s teacher shortage (caused by low salaries), the state board of education removed all requirements for new teachers other than a college degree and passing a test in subject matter.

In other words, if you have a bachelors degree in English, and can pass the English test that Pearson Utah develops, then the state will award you a teachers license.


I keep waiting to hear something from one of the proponents of free market for education.

After all-- no other part of the trained labor market works like this. If a hospital can't find enough doctors to fill its staff, nobody says, "Well, okay-- let's just let anyone with a college degree work in the operating room."

We do something like this in Indiana, too. Due to the Republican induced teacher shortage (see here, here, and here), the State Board of Education (all appointed by Republicans except for the popularly elected State Superintendent, Glenda Ritz), decided that anyone with a college degree can teach their subject at the high school level. Elementary school would have been included if the Board hadn't succumbed to pressure from "the people" and the "evil" teachers union.

...because you don't need to know anything about brain development, human learning patterns, or pedagogy to explain how to do a Physics problem, expound on Julius Caesar, or teach spoken French, right? You surely don't need any training in class management or child psychology to get a class of thirty-five 16 and 17 year olds to discuss the history of the Peloponnesian War.

This is the level of stupidity making the laws and rules for our public education systems. We're all about blaming teachers for all our "failing" public schools, yet legislatures starve public education and divert tax revenue into the pockets of Pearson, KIPP, various churches, and Gulen. Our poorest schools have scarce resources to overcome the effects of poverty while legislators who have created the misalignment of funds blame "bad teachers" for "failing schools."

Now Utah has followed suit, doubling down on the "create-a-teacher-shortage-then-hire-unqualified-people" plan.

Would policy makers in Utah, Indiana, or any state allow their own children to attend a school filled with untrained teachers? I doubt it. 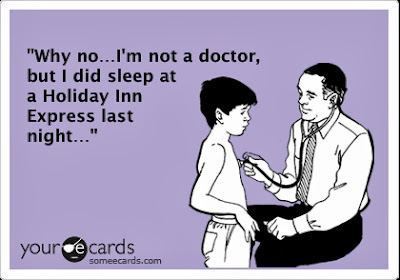 Let's extend Rob Miller's thought experiment to professionals. Training is important when we expect people to perform certain tasks. Because of that training certain people are better able to do certain tasks...just as Michael Phelps, Simone Biles, Usain Bolt, and all other olympians have trained. What would happen if the trained professionals we rely on were asked to perform the tasks of other professionals?

Would you want a plumber to rewire your house?

Would you let an electrical engineer perform your emergency appendectomy?

Legislators and state board of education members would likely agree that it would be nonsensical to ask an airline pilot to perform brain surgery...an accountant to defend you in court...or a chemist to do your taxes.

Why, then, is it ok to allow untrained amateurs to direct the learning and development of the nation's most important resource...its children?