Why Care About Other People’s Children

Since charter and voucher schools' test scores are no better than those of public schools, the privatizers had to change their argument for diverting public money into private and parochial pockets. The reason, they say, is for "parents to have choices." Most refuse to allow "choice" when it comes to opting out of a state's standardized test, but that's another story.

The idea behind "school choice" is that it should be up to a parent where his or her child goes to school and there are reasons other than achievement for choosing one school over another. This is a legitimate reason, except it's not up to the government to use public funds to pay for private educational choices.

No other public service provides "vouchers" to divert money to privatization. We can't choose to get a voucher for money paid to public libraries in order to shop at a commercial book store.

We can't choose to get a voucher for money paid to municipal park departments in order to fund membership in a country club.

We don't get vouchers to help pay for our cars instead of supporting local public transportation.

We don't receive vouchers in any other area, and we shouldn't receive them for education either. Public tax money is collected for the public good...for the community...for all of us.

Is the drive for "choice" in public education just another symptom of America's growing selfishness? It's framed in a selfish way focusing on "what's best for me no matter what it does to the community." I understand the desire to want the best for our own children, and I can't blame parents for trying to find a good "fit" for their child, but every citizen has a stake in the children of their community.

But there's common sense at work here as well, because even if we were hard enough to choose not to love them, we would still need them to be sound and productive, because they are the nation's future.

The selfishness of Americans will come back to haunt us when neglected, undereducated, undercared for children grow into adults. Pennsylvania teacher-blogger, Steven Singer, echoes Cuomo...


That’s why some folks champion privatized education – they only care about their own children. In effect, when a parent sends their children to a charter or voucher school, they are telling the community that they don’t care what happens to any one else’s kids so long as their kids are properly cared for and educated.

...So why should we care about other people’s children?

Because it’s better for ours. Because doing so makes us better people. Because all children are ends in themselves. Because they’re beautiful, unique sparks of light in a dark universe. 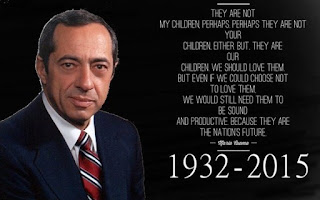 THE BIPARTISAN DESTRUCTION OF PUBLIC EDUCATION

In this post Ravitch says what I (and many others) have been saying for a long time. Democrats, at least nationally, are not friends of public education. They might be slightly better than Republicans because they haven't been pushing as hard for vouchers, but support for education "reform" in the U.S. is definitely bipartisan.

The trend towards blaming teachers, closing schools, encouraging charters, and misusing and overusing tests, was part of the education plan of President Bill Clinton...took shape with the passage of NCLB supported by Edward Kennedy and George Miller...and doubled down with Barack Obama's Race to the Top...all Democrats. There's a myth that Democrats love public schools, partly because they nearly always get endorsements from teachers unions, but, while they love teachers unions, they don't actually love the teachers or the public schools they teach in.


...Don't label a school as failing one day, and then throw your hands up and walk away from it the next. Don't tell us that the only way to teach a child is to spend too much of a year preparing him to fill out a few bubbles in a standardized test. We know that's not true...

President Obama's Race to the Top, unfortunately, did just the opposite of what the candidate said – it literally labeled schools as "failing" and then, by encouraging states to replace the bottom 5% of schools with charters, walked away from them. Yet, the NEA endorsed him. In the same speech, he endorsed merit pay for teachers. Candidate Obama said that he was against using an "arbitrary" test to link teacher pay to performance, and then President Obama, in Race to the Top, did exactly that.

Ravitch tells the Democrats to give up their "privatizing" ways and return to support for public schools, public school teachers, and the children of America.


Listening to their cries of outrage, one might imagine that Democrats were America’s undisputed champions of public education. But the resistance to DeVos obscured an inconvenient truth: Democrats have been promoting a conservative “school reform” agenda for the past three decades. Some did it because they fell for the myths of “accountability” and “choice” as magic bullets for better schools. Some did it because “choice” has centrist appeal. Others sold out public schools for campaign contributions from the charter industry and its Wall Street patrons. Whatever the motivations, the upshot is clear: The Democratic Party has lost its way on public education. In a very real sense, Democrats paved the way for DeVos and her plans to privatize the school system.

For years privatizers have decried the low test scores of American students as proof that our public schools are "failing." The fact that it's not true hasn't seemed to matter.

Here's a study showing that charter schools don't do as well as real neighborhood public schools on the National Assessment of Educational Progress, the NAEP test. What will the "reformers" say to that? Perhaps they will claim that standardized tests don't tell the whole story when it comes to student learning...I have my irony meter ready for that one.

But, here in Indiana the change in tone has been obvious. We are no longer privatizing public schools just to save poor children from "failing" public schools. Now it's about "choice" for "choice's" sake...just because.


In conclusion, the school-level national and large city NAEP results drawn from the Data Explorer are informative for the public discourse as charter schools are presently being presented as a superior alternative to the public school system. These descriptive school-level results from the NAEP Data Explorer suggest that the relationship between charter schools and improved student performance is not being realized nationally and in large cities. As a result, the present conversations promoting outstanding overall success of charter schools clearly need to be reconsidered and reframed. 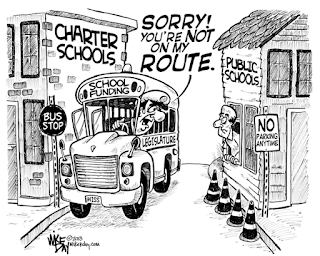