Charlotte's Web has been a favorite read aloud of third grade teachers for decades...probably since 1952, the year it was published.

I first heard the book when my third grade teacher, Mrs. Gilbert (Philip Rogers School in Chicago) read it out loud during the 1956-57 school year. It was the first novel I remember hearing a teacher read aloud in school, and it had a significant effect on me and my future.
For Teacher Appreciation Day, 2017, I'm reposting an entry, with some minor changes, from 2013 about reading aloud.

In appreciation of three of my favorite teachers, and the three who most influenced my growth as a teacher – Mrs. Gilbert, Dr. Lowell Madden, and Jim Trelease – who taught me that reading aloud is still the most important part of reading instruction...

In 1979 I ordered a pamphlet on reading aloud from the Weekly Reader Book Club. I had earned my teaching certificate before the 1976-77 school year and had been reading to my third graders every day...just like Dr. Madden (Lowell E. Madden, education professor at Indiana/Purdue Fort Wayne) taught me to do. 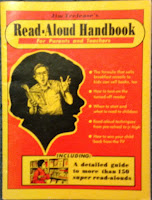 Dr. Madden impressed upon us the importance of reading aloud...and for the 19 years (out of 35) I spent in a general education classroom it was my favorite part of the day. I read to all my classes...kindergarten through 6th grade...Where the Wild Things Are and Junie B. Jones through The Island of the Blue Dolphins. I can't remember ever missing a day. It was my belief -- and it still is -- that reading aloud to children is the most important thing that a teacher (or parent) can do to help their child(ren) succeed in reading.


The single most important activity for building the knowledge required for eventual success in reading is reading aloud to children...It is a practice that should continue throughout the grades. [emphasis added]

That quote from Becoming a Nation of Readers published some years later (1985) reinforced my desire and my determination to read aloud to my students every day.

As new editions of The Read Aloud Handbook were published I would buy them. When friends and family members had new babies, I would give copies of the book as gifts. When Jim Trelease visited Fort Wayne, which he did several times, I'd go hear him speak. I even started gathering a few autographs from the author.

[I took the Weekly Reader edition of the Read Aloud Handbook to one of his lectures. I stood in line for an autograph after the presentation and was delighted at his response. He acted like he just had a visit from a long lost friend.] 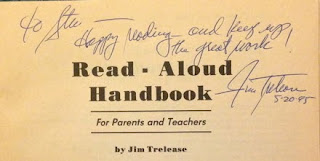 According to the newest edition reading aloud helps a person become proficient at reading in two ways...
Why does it work? Because having someone read to you is fun...humans like fun...they want that fun to continue so they are motivated to learn to do it on their own.

Trelease talks about reading achievement in the US compared to the rest of the world. We have, he says, some of the best nine-year old readers in the world, second only to Finland. By the time American kids are 14 however, they drop to eighth place. Would reading aloud to older students help? 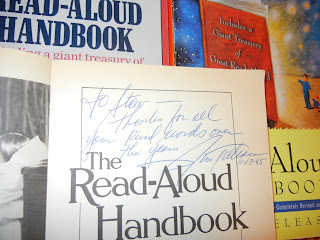 Most primary teachers read to their students every or almost every day. As the children get older, however, the frequency of teacher read aloud diminishes. Part of this is because the curriculum is so much heavier in upper grades, and part of it is, of course, the pervasive and time consuming influence of testing and test-prep. By the time students are 14, barely half of their reading/English/literature teachers read to them...and almost no teachers of other subjects do.

An article titled Why Reading Aloud to Older Children Is Valuable argues that reading aloud to older students is still valuable.


For Trelease, the power of shared words is a big reason to keep on reading aloud after children are able to read for themselves. Students might interject questions, comfortably wading into complicated or difficult subjects because they are happening to the characters in the story, and not to themselves. “Why do you think so many children’s stories have orphans as characters? Because every child either worries or fantasizes about being orphaned.”

While Trelease maintained that read-alouds can happen through any device (“Look at all the truckers listening to books on CD,” he said), and Lahey reads from a physical paper book, dogeared and scrawled with all her notes in the margins, both emphasized how students recall read-alouds with fond memories. Trelease recently received a letter from a retired teacher who reconnected online with former students some 30 years later. She wanted to know the one thing her former students remembered about her class.

“Without fail, it was the books she read to them.”

A few years before I retired I met a couple of my former third graders at a school function. They were in their early 20s, out of college, starting on their own careers. I asked them if they remembered being in third grade. They said the same thing that most of us say when we return to our elementary schools after becoming adults..."The school looks a lot smaller now." Then one of them added...


I remember you were the one who read all those books to us...

...and he proceeded to name off half a dozen of his favorites. Over the years I've gotten notes from former students telling me that they were reading a book to their children or their class which I had read to them when they were in my class. Reading aloud makes an impression...a positive one.

Wouldn't it be nice if teachers at all grades could eliminate some of the test prep and spend more time reading to their students?

Wouldn't it be nice if all parents read aloud to their children? (Parent hint: Start when your baby is an infant...day one. Don't stop till they leave home for good.)