How Much Free Speech is Too Much

Congress shall make no law...abridging the freedom of speech...
The constitutional guarantee to free speech is in the news. On university campuses across the country protestors are lining up to do battle against university sponsored, or university-based group sponsored speakers. Does a speaker have the right to be heard no matter what he or she espouses? The following is a partial list (which I compiled by searching the internet for who has been prevented from speaking at universities) of people who have been "disinvited" to speak at universities, disrupted in their attempt to speak, or prevented from speaking by the threat of protest. 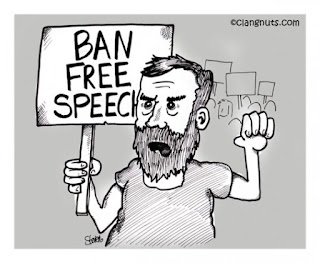 Articles have been written in favor of and against the trend...

No matter what your position on allowing offensive (and everyone in the list above is offensive to someone) speech at a university, or anywhere else, there are certain things about the First Amendment protection of free speech that should be remembered.

You can, in most situations, express your opinion about almost anything, but by doing so you open yourself up to criticism. Criticism is also protected free speech.

For example, if you don't like what I write on this blog, you can, in the comments, dispute what I have written and tell me I'm wrong. Your comment is the consequence of my self-expression and you have the right to criticize me. (On the other hand, I also have the right to delete your comment if it violates my rules or I find it offensive. That's the consequence of your speech in my comments. Click here to see commenting rules).

The government protects free speech. Private citizens or groups do not. If I own a venue and invite speakers to visit on occasion, I can choose who I want to invite. If I invite Bernie Sanders, but not Mitch McConnell, I have not limited the free speech of Senator McConnell. I simply haven't invited him to my venue. He is free to find his own venue in which to speak. If I do invite Senator McConnell, and then change my mind, I might be considered an ill-mannered jerk, but I'm still within my rights, and I have still not restricted the Senator's free speech.

When UC-Berkeley decided to postpone Ann Coulter's speech (Coulter herself is the one who chose to cancel), they didn't restrict her free speech, even though you might consider them jerks for changing the date of the invitation. Ms. Coulter still has the option of writing books and op-eds, speaking at rallies, talking on television, radio and podcasts. In fact, she did just that in the article linked in this paragraph. She has every right to rail against those who prevented her from speaking. But she still has freedom of speech.

When universities cancel speeches because of the threat of protest, they have the right to do so. This is not limiting the canceled speaker's free speech. Every one of those speakers is free to find other locations to speak, or write their opinions, or find broadcasts on which to express themselves.

We can disagree with a group or university who prevents or denies someone the opportunity to speak at a particular location, however, that someone still has the option of arguing against the denial on their own.

[The preceding argument is definitely true when the university is privately owned, but does this change if the university is publicly funded like UC-Berkeley? If so, does that mean that anyone who wants to can demand to speak at a university? See the article by the ACLU, below.] 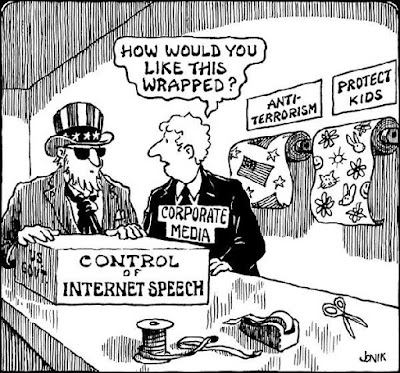 In other words, free speech, under the U.S. Constitution is not 100% guaranteed. There are restrictions and consequences. See here, here, and here for discussions of ways that free speech can be denied in the U.S. Here are a few...

1. First, we've already discussed...
2. Those folks who incite to riot in order to prevent someone from speaking need to be careful...
3. The following description is the basis of a settled suit against the defunct Trump University.
4. Keep this in mind if you want to keep your job...
5. This applies to all students.
6. Is "knock the crap out of them" a violent threat?

The American Civil Liberties Union states that objectionable speech may not be restricted at government-financed campuses.

Academic freedom (and freedom of speech) protects the rights of a person who makes objectionable statements, but does it also protect the right of the governing body of an academic institution to change its mind? Once someone is invited is there no option but to let them speak? What about someone who is not invited? May they "invite" themselves?


Many universities, under pressure to respond to the concerns of those who are the objects of hate, have adopted codes or policies prohibiting speech that offends any group based on race, gender, ethnicity, religion or sexual orientation.

That's the wrong response, well-meaning or not. The First Amendment to the United States Constitution protects speech no matter how offensive its content. Speech codes adopted by government-financed state colleges and universities amount to government censorship, in violation of the Constitution. And the ACLU believes that all campuses should adhere to First Amendment principles because academic freedom is a bedrock of education in a free society.

The American Library Association fights censorship every day...but are they against censoring everything?

Intellectual Freedom and Censorship Q and A


What Are The Most Frequently Censored Materials?

Throughout history, books have been challenged for many reasons, including political content, sexual expression, or language offensive to some people’s racial, cultural, or ethnic background, gender or sexuality, or political or religious beliefs. Materials considered heretical, blasphemous, seditious, obscene or inappropriate for children have often been censored.

Since the dawn of recorded human expression, people have been burned at the stake, forced to drink poison, crucified, ostracized and vilified for what they wrote and believed.

Aren’t There Some Kinds Of Expression That Really Should Be Censored?

The United States Supreme Court has ruled that there are certain narrow categories of speech that are not protected by the First Amendment: obscenity, child pornography, defamation, and “fighting words,” or speech that incites immediate and imminent lawless action. The government is also allowed to enforce secrecy of some information when it is considered essential to national security, like troop movements in time of war, classified information about defense, etc.

WHAT DO YOU THINK?

Should objectionable speech be allowed on public campuses?

What's the difference between objectionable speech and hate speech?

What about name calling in the form of racial or ethnic slurs? 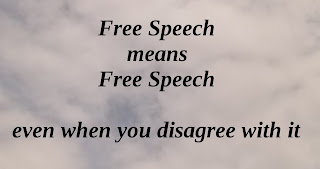 Email ThisBlogThis!Share to TwitterShare to FacebookShare to Pinterest
Labels: FirstAmendment