For this year's Sagan Day, I offer some quotes on our current condition...


There is perhaps no better demonstration of the folly of human conceits than this distant image of our tiny world. To me, it underscores our responsibility to deal more kindly with one another, and to preserve and cherish the pale blue dot, the only home we've ever known.

THE CHARLATANS ARE HERE

Reversing the anti-science direction of the country will take time and won't be easy. We can do it if we focus on the today's students...tomorrow's leaders.

The charlatans are here...it's time to step up.

FROM THE DEMON-HAUNTED WORLD, 1996 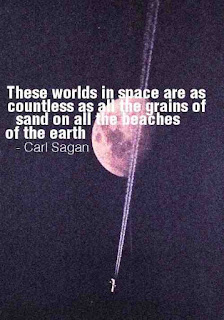 
We could not guess how different from us they (extraterrestrials) might be. It was hard enough to guess the intentions of our elected representatives in Washington.