When Testing Takes Over

The opt-out movement has shown that the general public is beginning to become aware of what teachers have known for years – that standardized tests are overused and misused in the US, they're expensive, and they don't improve instruction. In fact...

From Daniel Koretz, author of The Testing Charade


...the pressure to raise test scores has become so strong that testing often degrades instruction rather than improving it. 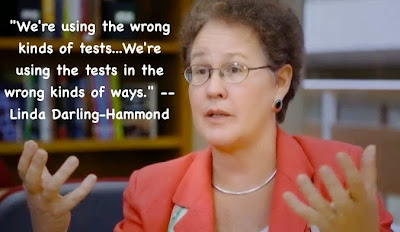 Why Parents Make Flawed Choices About Their Kids' Schooling

When parents review test scores for their children does anyone explain what they mean? Is the relationship between family income and test scores acknowledged in discussions with parents?

From Jack Schneider, author of Beyond Test Scores: A Better Way to Measure School Quality in The Atlantic


What’s needed, he said, is for parents to understand that test scores track so closely with a person’s background—their parents’ education level and income—that they say little about the quality of a school. “And if we were more honest about that,” Schneider said, “I think that would do a great deal to get parents searching for better information”—information on things like the relationships between teachers and students, how students interact with each other, and “the degree to which students are engaged and happy to be there.”

Ain't That a Shame

The last half of my 35 year teaching career were spent working with first, second, and third grade students as a pull-out reading specialist and first graders as a Reading Recovery teacher.

One day I went to pick up one of my second graders. He was a difficult child. He struggled with reading, had a home life which was chaotic and difficult, and had attention issues in class. This meant that he had a tendency to get up and do things around the classroom no matter what was going on...because he really didn't know what was going on.

I opened the door of the classroom and saw him standing by his desk – which was isolated, next to the teachers desk. He was crying.

The teacher turned to me as I walked in and said, loud enough for everyone in the classroom to hear, "Don't you think that a second grade boy is too old to be crying in school?"

I did the best I could to remain calm; I don't think anyone heard me gasp. I mumbled a response that was probably something like, "Oh dear...having some problems?" and I took the child from the room to give both him, and his teacher, a break from each other.

I became a teacher of children with learning difficulties because of my own experiences as a child. I wanted to help kids who were, like me, having trouble functioning in a classroom. I was personally and painfully aware of the frequent shame and humiliation used by some teachers to control students and maintain order in their classrooms. My goal, as a teacher, was to protect my students from that.

When Russ Walsh, in his latest post, described one of his own experiences with humiliation, as a 12-year old, I instantly remembered being frequently humiliated by Mrs. H, my 8th grade math teacher, who seemed to revel in my inability to perform, and I remembered seeing a seven-year old student standing alone by his desk, crying, while his teacher belittled him in front of his classmates.


...shaming works directly against our desire as teachers to develop thoughtful, reflective, self-actualized learners who are willing to take the risks necessary for learning to take place. 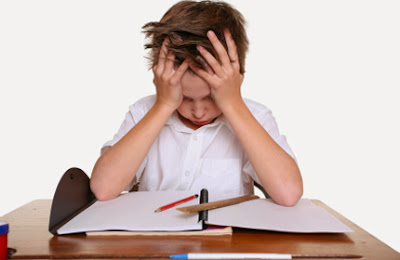 Just another shooting in America. Nothing to see here...


As my colleagues go to sleep tonight, they need to think about whether the political support of the gun industry is worth the blood that flows endlessly onto the floors of American churches, elementary schools, movie theaters, and city streets. Ask yourself – how can you claim that you respect human life while choosing fealty to weapons-makers over support for measures favored by the vast majority of your constituents.

POLITICS: THE ANTI-SCIENCE TAKEOVER OF THE EPA

Is the air in your town "too clean for 'optimum health'?"

From Climate Denial Crock of the Week


Robert Phalen of the University of California, Irvine is a new science board member. He has argued that current air quality in the United States is too clean for “optimum health.” 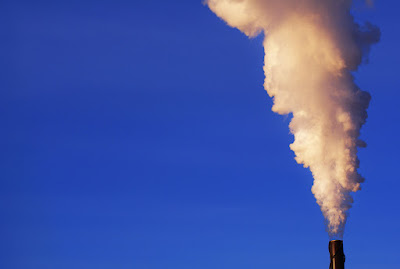 Trump’s EPA has blocked agency grantees from serving on science advisory panels. Here is what it means

Hypocrisy in the EPA. Former lobbyists and industry executives are charged with policing polluters. Meanwhile, scientists who study the environment are not allowed on science review panels.


Allowing scientists funded by the very industries the agency is tasked with regulating to participate on independent science review panels, while prohibiting leading scientists simply because they have received funding through EPA grants, is the height of hypocrisy.

Early childhood education expert: I saw a brilliant way to teach kids. Unfortunately it wasn’t in the United States.

There's a push for universal pre-school education in the US, but what kind of pre-K education are we going to get for our children? Will four-year-olds be subject to the same test and punish policies that have damaged our K-12 public schools? Will admission to pre-school be manipulated to increase a state's voucher plan? Will early-childhood specialists be included in the planning and implementation? Will privatization trump developmentally appropriate practice?

From Nancy Carlsson-Paige in The Answer Sheet


I just visited with early childhood professionals in Nova Scotia, Canada. They showed me their new Early Learning Framework for the education of young children. It is a stellar example of what early childhood education could be if a country did it right, and a painful example for someone coming from a country where we do it so wrong. 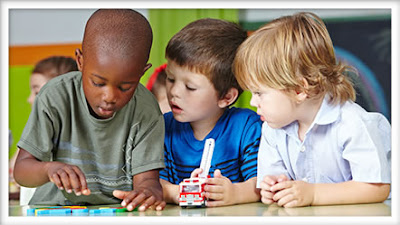 How to kill the teaching profession:
1. Create a toxic atmosphere for public school teachers.
2. When those teachers quit/retire, and young people avoid the profession, declare a teacher shortage.
3. Save money by hiring under- or unqualified people to fill unfilled positions.


McDaniel says some dispute the notion of a teacher shortage. One reason, he says, is they compare the number of open teacher jobs to the number of people in the state licensed to teach.

“The problem is just because you have a teacher license, doesn’t mean you are applying for teaching jobs,” he says.

...Charter schools and private schools are not part of the survey 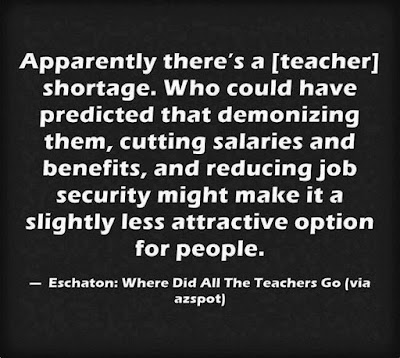