"There are men running governments who shouldn't be allowed to play with matches..."

Will Rogers was born 138 years ago, on Nov 4, 1879, in Oologah, Cherokee Nation, Indian Territory (now Oklahoma). He began his career as a rope trick artist...but quickly discovered that he could keep audiences more entertained with comments and jokes than with his rope tricks.

He starred on vaudeville, with the Ziegfeld Follies, and in movies, wrote a newspaper column, and he even "ran" as a "bunkless" presidential candidate on the Anti-Bunk Party (1928), though he did promise to resign if elected. When asked whether voters could be fooled, he said, "Yes..."


Of all the bunk handed out during a campaign the biggest one of all is to try and compliment the knowledge of the voter.

Rogers traveled the world as a writer for The Saturday Evening Post in the mid 1920s and 30s and he feared that Europeans would be involved in a second large scale war. He expressed an isolationist philosophy for the U.S., reasoning that Americans should focus on domestic problems rather than getting involved in "foreign entanglements."

Richard D. White, author of Will Rogers: A Political Life said in a 2011 interview,


From just before World War I, through the Jazz Age, all through Prohibition, the Great Depression, and up until Rogers's tragic death in a plan crash in 1935, he captivated the nation and the world with not only his humor, but his political commentary.

During the last two years of his live he was the top male box-office attraction at the movies. The only person who topped him was Shirley Temple...

About his politics, White said,


Rogers loved his fellow man. When he said he never met a man he didn't like, he meant it. But he also mistrusted mankind, and the modern huge monoliths of government, bureaucracy, and large corporations. He defended democracy but had little faith in the political or economic systems of his day to actually improve common man's lot. He thought politics was the lowest of life-forms...He feared extremist organizations from the Ku Klux Klan to the Communist Party yet he could share a friendly cup of coffee with their members...

[I recommend listening to the entire 46 minute interview with Richard White where he discusses Will Rogers and his feelings about a wide variety of topics such as dictators, socialism, populism, Andrew Jackson, his Cherokee ancestry, Hoover, FDR, Democrats, and Republicans.]

Below are some quotes attributed to Will Rogers (found HERE unless otherwise noted)... 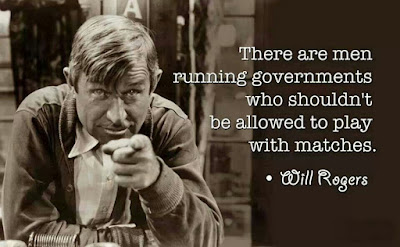 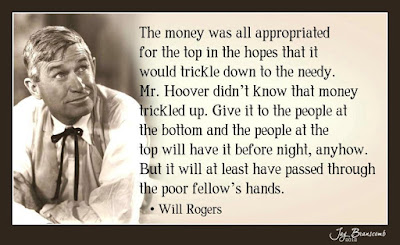 For another more detailed and longer (57 minutes) discussion of Rogers' life, click HERE (from August 1994).