Challenging the myths about teachers

It's always dangerous to read comments on the internet. The anonymity afforded users makes it easy for them to rant, bitch, and promote myths and lies. The last week of 2018 was no different.

Teachers Quit Jobs at Highest Rate on Record by Michelle Hackman and Eric Morath.  (Note: This article is behind a paywall. You can read a review of the article at The Hill, Teachers in America quitting jobs at record rate)

The authors discussed the teacher shortage, last year's state-wide teacher strikes, and the lack of support that teachers get. You can read about all that on your own...today I'm going to focus on the comments the article generated.

Now, I know that the editorial page of the Wall Street Journal is very conservative so it's not surprising that many of the people who comment are similarly inclined. For one reason or another, some of those conservatives, seem to hate public education, public school teachers, and public sector unions (surprise, surprise!). Many left angry and ignorant comments about teachers and public schools (comments on The Hill report are similar). Not all, of course. There were people who were defending public schools, teachers, and unions, but they were in the minority and fought a losing battle against ignorance and envy.

The anti-public education comments fell into three general categories focusing on teachers, teachers unions, and failing schools.
Most of the comments were based on myths and popular media images of public schools and teachers. Every public school teacher/parent should be ready to challenge those myths.

The basic assumption for nearly every anti-teacher/public education comment is that America's public schools are failing.

Over the last couple of years, I have written, read, and reported on posts that explained that America's public schools are generally successful. Please read one or more of those before proceeding. I'll wait...
Now that we understand that America's public schools are among the best in the world and that poverty along with the neglect, ignorance, or avoidance of the effects of poverty are the cause of low student achievement, let's address the first set of comments, those about teachers. 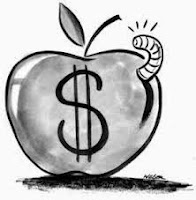 Teachers are not paid too much compared to other college graduates when you factor in their benefits. In fact, it's just the opposite.

The teacher pay penalty has hit a new high

Benefits do not make up the difference, either. The total compensation penalty for teachers reached 11% by 2017. In other words, teachers, on average, make 11% less than other equally-educated workers even when you include benefits.

What about pensions? Don't teachers get fabulous pensions which suck taxpayers dry?

Different states have different rules regarding teacher pensions, and those rules change frequently. Some states, like Illinois, have been fighting over teacher pensions for years. Other states have good pension plans...some have terrible plans. You can check out this article for an overview. If you'd like to see what the average monthly pension is for teachers in your state, read What Is the Average Teacher Pension in My State? 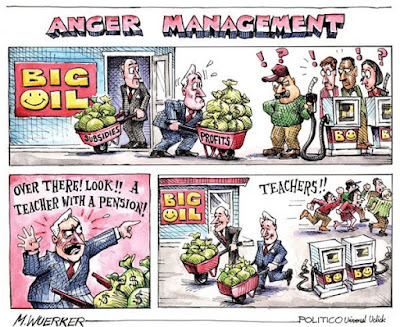 In Indiana, teachers teach at least 180 days a year. In most school systems teachers are required to be in school between seven and eight hours each of those days. Before I retired, my school system's contract required that we work 7 3/4 hours a day. We also had an additional 5 days each year that we had to work...classroom preparation, in-service days, etc. Our contracted days and hours each year were 185 days at 7 3/4 hours a day which (when divided over the entire year) comes to about 27.6 hours a week ((185 x 7.75)/52=27.572).

Most teachers work more than the required daily hours. Some come in early to prepare for the day's lessons or tutor students, some stay late grading or, again, tutoring. Some do both. The actual number of hours the average teacher spends working each day varies, but it's almost always more what's written in the contract. When I was a classroom teacher, I averaged about nine hours a day, plus another hour or two at home grading and planning...and sometimes on weekends...

Furthermore, many of the "vacation days" during spring break, summers, winter break, etc., are work days for teachers, who spend several weeks each year in continuing education (required in Indiana), curriculum planning, and classroom preparation.

So, do teachers work fewer hours than other college graduates? No. If you want more information on this topic, read this...

Teachers work more overtime than any other professionals, analysis shows 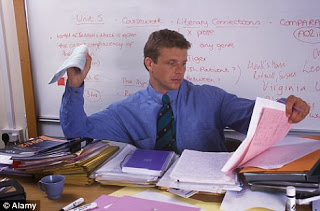 It's true that in past years the average SAT/ACT test scores for teachers has been higher. There was once a time where teaching was one of the only careers open to bright, young women. Now that other occupations are open to those women who achieve higher test scores, the average test score of teachers in the U.S. is...well...average, at about the 48th percentile. Teachers are not the top test takers in the nation, but they well within the average range. The old canard about teachers coming from the bottom third of their graduating classes is not true. Some do, of course, but that's true in every profession. Did you ever stop to think that your family physician might have finished in the bottom third of her graduating class? What if the pharmacist who fills your prescription scored the minimum on his licensing test?

What about the course of study for teachers? Is the teacher preparation program at state and local universities easier than other courses of study?

Peter Greene, who blogs at Curmudgucation, wrote that asking whether the classes are hard or easy is the wrong question (emphasis added).


I agree that college teacher training programs are, at best, a mixed bag, and at the bottom of that bag are some truly useless programs. Talking about "hard" or "easy" is really beside the point; we'd be better off talking about useful or useless, and some teacher prep programs really are useless. Some programs involved a lot of hoop jumping and elaborate lesson planning techniques that will never, ever be used in the field; this kind of thing is arguably rigorous and challenging, but it's of no earthly use to actual teachers.

Some classes are very difficult but useless. Other classes may seem easy, but have a lot of practical use for pre-service teachers.

When I look back at what was useful in my own preparation I can acknowledge that The History of Education wasn't that difficult. Neither were some of the other courses I took like Math for Elementary Teachers or Children's Literature. On the other hand, when I was a student I learned something that served me well as a pre-service teacher.


I got out of my courses what I put into them.

So, while The History of Education wasn't all that useful when I started teaching, Educational Psychology and Child Development were...Math for Elementary Teachers was...Curriculum Development was (at least it was back in the day, when teachers actually had an impact on curriculum)...as were my "methods classes" and many of the other courses I took.

The most useful courses, however, were the ones in which I spent time with children, learning to relate to them and learning how to explain things to them. And, like most teachers, once I started teaching, I understood that being an educator is not easy.

Those young people who go into education because the preparation is easy, or go into education after they graduate in order to pad their resume, find out quickly that teaching is not as simple as your third-grade teacher, your middle school math teacher, or your high school English teacher made it look. That's why so many beginning teachers leave the field within their first five years. That's why the ones who make a career in education are the ones who are willing to work...the ones who love what they do enough to invest their time, energy, and passion.

So, do people become teachers because it's an easy course of study? Possibly. But those who do, usually don't last in the field of education. Perhaps some of them even become state legislators... 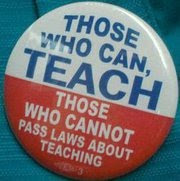