Medley #15: A Poisoned Environment - A Side-Effect of Poverty

Lead in the environment damages children...permanently. It lowers their school achievement, causes behavior and growth problems, and can increase criminal behavior.

Educational Researcher David C. Berliner discussed the impact of environmental toxins such as lead in his 2009 paper, Poverty and Potential: Out-of-School Factors and School Success. He wrote,


It is now understood that there is no safe level of lead in the human body, and that lead at any level has an impact on IQ. Small doses from paint on toys or in cosmetics have the power to subtly harm children. The present-day cut off for concern about toxic effects is usually a measured lead level of 10 micrograms per deciliter of blood (10 μg/dl). Anything higher than this is considered unsafe by the U.S. government. However, a five-year study of 172 children indicates that lead causes intellectual impairment even at much lower levels...

Now, in 2019, ten years later, we're still discussing the damage that lead poisoning does to our children...and we're still blaming the low achievement of lead-damaged children on schools, teachers, and parents through our reliance on test scores and our underfunding of those schools serving children who need the most help.

[The following is from the Environmental Protection Agency. I reccomend that you read it soon, as there's no telling when the current administration will remove it from the web site.]


It is important to recognize all the ways a child can be exposed to lead. Children are exposed to lead in paint, dust, soil, air, and food, as well as drinking water. If the level of lead in a child's blood is at or above the CDC action level of 5 micrograms per deciliter, it may be due to lead exposures from a combination of sources. EPA estimates that drinking water can make up 20 percent or more of a person’s total exposure to lead. Infants who consume mostly mixed formula can receive 40 percent to 60 percent of their exposure to lead from drinking water.

Even low levels of lead in the blood of children can result in:


The most notorious example of state-sponsored child-poisoning in the last few years has been in Flint Michigan, where the residents still do not have safe drinking water, and those responsible for the mess -- and covering up the mess -- have yet to be held accountable. 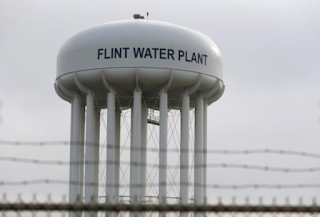 Flint’s Water Crisis Started 5 Years Ago. It’s Not Over.

This was published in April 25, 2019, five years after a group of Flint officials declared the water safe. How many children from Flint now need special educational services?


...in Flint, the water crisis is by no means in the past.

“It’s a community that’s still dealing with the trauma and the aftermath of having been poisoned at the hands of the government,” Karen Weaver, who replaced Mr. Walling as mayor largely because of anger over the water crisis, said in an interview this week. Ms. Weaver continues to tell residents to drink only bottled or filtered water.

On Thursday, pastors and activists gathered outside the city’s water treatment plant to call for more help. Some wore shirts that said “Flint Is Still Broken.”

It's not just Flint, however. Right here in Indiana...

The Bitter Legacy of the East Chicago Lead Crisis

...which then-Governor Pence ignored as long as he could...


In 1985, the Indiana State Department of Health discovered lead contamination near the USS Lead facility, the same year the facility closed down. While USS Lead would later clean up lead waste at the facility, contamination would linger in the surrounding areas. It wasn't until 2009 that the U.S. Environmental Protection Agency (EPA) added parts of the USS Lead facility and the surrounding neighborhood to the Superfund National Priorities List...

In the summer of 2016, the EPA sent letters to residents of the housing complex informing them of the lead contamination. Frustrated by the slow pace of the EPA cleanup effort, which continues to this day, East Chicago Mayor Anthony Copeland called on the Department of Housing and Urban Development (HUD) to demolish the West Calumet Housing Complex, which it did, forcing more than a thousand residents to move out.

As far as funding goes, the St. Joseph County Health Department doesn’t have the money to help all the children with elevated blood levels—help like seeing if there are lead hazards in the kids’ homes or educating parents on how to manage lead poisoning...


...a lack of funding means the majority of the yards in EPA's study area have been left untouched.

By EPA’s own safety standards, their soil level should warrant action, they said, but so far, EPA has only had enough money to clean yards deemed critically necessary...


A new round of test results show potentially hazardous lead-levels in water at seven Hammond schools, and now some in the community are worried about schools that have not been tested yet.

What do all these areas have in common besides lead in the water?

A high percentage of children of color, and high levels of childhood poverty.

60% of Flint's children live in poverty. East Chicago schools have a free and reduced lunch rate of 85%. Childhood poverty rates for children in South Bend, while dropping in recent years, is still over 30%, well above the state average.

Newark New Jersey, with a childhood poverty rate of over 40% is now facing the same situation as Flint, East Chicago, and dozens of other high poverty cities around the country.


A growing crisis over lead contamination in drinking water gripped Newark on Wednesday as tens of thousands of residents were told to drink only bottled water, the culmination of years of neglect that has pushed New Jersey’s largest city to the forefront of an environmental problem afflicting urban areas across the nation.

Urgent new warnings from federal environmental officials about contamination in drinking water from aging lead pipes spread anxiety and fear across much of Newark, but the municipal government’s makeshift efforts to set up distribution centers to hand out bottled water were hampered by confusion and frustration. 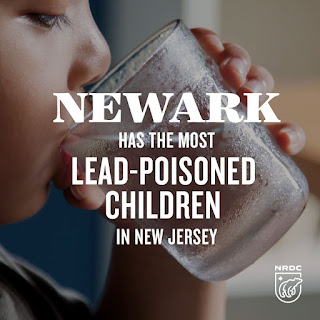 Why do children in poverty achieve at lower rates than wealthier children? In part, it's because they are exposed to environmental toxins like lead at higher rates than their wealthier peers.