The Lamp is broken; the Golden Door is closed

The current acting Director of Citizenship and Immigration Services made the news on Tuesday...


On Tuesday, Mr Cuccinelli was asked by NPR whether the 1883 poem titled The New Colossus at the Statue of Liberty on New York's Ellis Island still applied.

"Would you also agree that Emma Lazarus's words etched on the Statue of Liberty, 'Give me your tired, give me your poor,' are also a part of the American ethos?" asked NPR's Rachel Martin.

"They certainly are," Mr Cuccinelli responded. "Give me your tired and your poor - who can stand on their own two feet and who will not become a public charge."

Those of us who are familiar with the poem, and the history it embodies, know that the actual words are a bit different. There are no strings attached to coming to America and Cuccinelli, no matter what his "acting" title, can't change that. While it's not the law of the land, Emma Lazarus's poem has been part of what Rachel Martin called the "American ethos" for more than a century.

"It's clear the Trump Administration just wants to keep certain people out," the committee wrote, calling Mr Cuccinelli "a xenophobic, anti-immigrant fringe figure who has no business being in government".

Emma Lazarus was not an immigrant, but she came from immigrant roots. She was born in New York City in 1849 to a wealthy Jewish-American family. When she was asked to write a poem for the base of the Statue of Liberty she recognized that the statue was a beacon, an outward-facing welcoming sign.

She focused her poetry on the "welcome" of America because her immigrant roots were important to her and she used the poem to express the feelings of those immigrants and refugees who were looking for a place to "breathe free." At the time, she was aware of Jewish refugees from Russian anti-Semitic violence, but her words were universal and applied to everyone who needed to escape oppression.

Here is a country where you will be welcomed.

Here is a country where you can be free to live your life.

Here is a country where you can find a home. 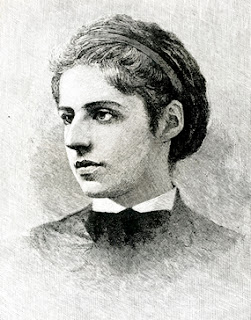 Not like the brazen giant of Greek fame,
With conquering limbs astride from land to land;
Here at our sea-washed, sunset gates shall stand
A mighty woman with a torch, whose flame
Is the imprisoned lightning, and her name
Mother of Exiles. From her beacon-hand
Glows world-wide welcome; her mild eyes command
The air-bridged harbor that twin cities frame.
"Keep, ancient lands, your storied pomp!" cries she
With silent lips. "Give me your tired, your poor,
Your huddled masses yearning to breathe free,
The wretched refuse of your teeming shore.
Send these, the homeless, tempest-tost to me,
I lift my lamp beside the golden door!"