2. Educate The Whole Child. Invest to ensure that all schools have recess and physical education equipment, healthy food offerings, and classes in art, theater, dance, and music in every school. Offer world languages and a variety of subject choices. Provide every school with a library and assign the commensurate number of librarians to staff them.

At the private and selective-enrollment University of Chicago Laboratory School, elementary students have classes in art, music, physical education and world languages several times a week, as well as language arts, social studies, mathematics and science daily. At private and selective-enrollment Francis Parker School, students from 3rd to 12th grade participate in a program called “Morning Ex” (for “Exercise”) three times a week. This program provides students the opportunity to plan and carry out a variety of activities, including teach-ins, sharing of class projects, dramatic performances, outside speakers, and other enriching activities.

In CPS, on the other hand, many elementary students have limited access to physical education, arts education (music, drama, art, dance, choir, band, etc.), library/media instruction, science laboratories, or computer science. Few CPS schools provide world language classes and 160 CPS elementary schools do not even have libraries. Although access to libraries and books can mitigate the impact of poverty on achievement, CPS denies this vital resource to some of its students who need it most.

~~~
Stand Against Rahm! The Chicago Teachers' Strike Is the Next Chapter in the Fight Against Plutocracy

Those of you who hate teachers and teachers unions: If your boss told you to add 2 more hours to your work day without an increase in pay would you just quietly accept it? What if you already volunteered extra hours every day, on weekends and during vacations?


Overwhelmingly, Chicago’s teachers support lengthening the day, which is the shortest of any major district in the country. Just not the way Rahm wanted to ram it down their throats: 20 percent more work; 2 percent more pay. 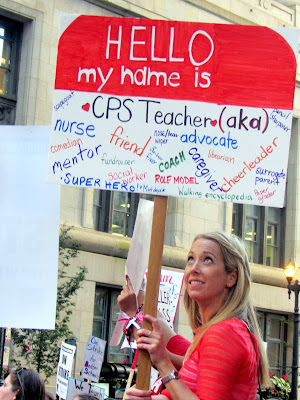 ~~~
Their Fight is Our Fight


At my school, I looked at the calendar for the year, and there are about 15 days where students are being tested on standardized tests. These tests are not designed to help the students. Many of these tests are designed because of No Child Left Behind to measure the school. And now, because of Race to the Top and these new reforms, now these tests are being used to measure teacher performance. So what does that mean? It means that rather than planning rich-inquiry, interesting lessons for our students, we have to focus on very specific tested standards in a very narrow way...

~~~
Chicago Reminds Us Why we have Unions


Teachers in Chicago have done their homework. They did not just decide to strike this month. They have laid the groundwork, in a way that should be studied by others around the country. They have made it clear what they are fighting for, and done tremendous work with parents and in the community to build support. While the media has been critical of the union, public support remains strong, with 47% of voters in support, and only 39% in opposition.

This support was hard-won. Teachers in Chicago have been working for several years to build an understanding of what the schools there need. They have presented their OWN vision of reform. In February of this year, they released this report, The Schools Chicago's Students Deserve.

~~~
Unions aren’t the enemy, and teachers shouldn’t back down, either


If organized labor is at the heart of the problem, though, why are outcomes in different areas of the country no different whether teachers are unionized or not?

...And let’s not forget why we have teachers unions in the first place: It’s because in the not-so-great old days, mostly female teachers had no recourse when they were fired for no good reason, or were otherwise treated unfairly.

...Teachers in Chicago have decided they won’t back down at an inconvenient time for the president, but that doesn’t mean they’re wrong. If we really wanted to improve schools, we’d do what education powerhouse Finland does — fund schools equally, value teachers more, and administer standardized testing almost never. 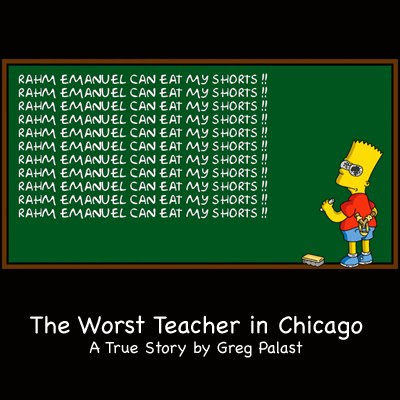 ~~~
The Worst Teacher in Chicago

A veteran teacher was "no good" when she was in the public schools at the top of the salary scale...she got fired (so much for the myth that you can't fire teachers). She was rehired at slightly more than half her salary by a local charter school...where she was hailed as "an innovative English teacher with advanced degrees and a national reputation in her field."

Is it improvement that "reformers" want? or is it union-busting and profits?