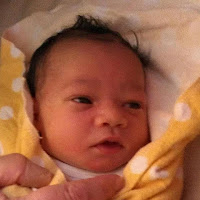 The birth of a baby is a catalyst for thought...What does the educational future hold for this child born in the last third of 2012 and for all children who have yet to begin their formal education?

They will, of course, see changes that we can't predict. When my grandfather was a child in Eastern Europe at the end of the 19th century, he couldn't have envisioned the world of the 1950s with airplanes, radio, and automobiles. When my parents were children after World War I there was no such things as television or airplanes which could break the sound barrier. When I was a child in the middle of the 20th century, space flight, pocket computers, laser technology and cellular phones were just science fiction dreams.

Changing technology and a changing climate will surely affect today's babies in ways we can't imagine. It would be foolish to think that the world will be the same place in 18 years, when today's newborns graduate from high school...assuming that the term "high school" has any meaning in the future.

There are some changes, on the other hand, which we are able to predict. It's almost a sure thing that schools will be different for my newest grandchild than it was even for her older cousins. Neighborhood schools are disappearing...replaced with corporate charter schools* and for-profit cyber schools. The regular public schools will continue to struggle to keep up with the needs of the students who attend them as more and more money is funneled away to vouchers and corporate charters. Students with special emotional, linguistic, academic, and physical needs, will be stuck in underfunded public schools unless their parents happen to have enough money to get them something "fully funded." As Republican Candidate Romney has remarked, he wants to make sure that students can get as much education "as they can afford" which means that those who can't afford it, don't get it.

No Child Left Behind, and Race to the Top have essentially guaranteed that students who attend public schools will be given the weakest kind of education possible...with curriculum and teachers focused on test scores rather than learning. This is in contrast the children of the wealthy (many of whom are responsible for or supportive of NCLB and RttT) who can send their children to schools like the lab school at the University of Chicago (where Arne Duncan spent his school years), Sidwell Friends School (where the Obama children attend), or the Belmont Hill School (where Mitt Romney's children were students) where students are treated to low class sizes, higher level thinking skills and assessments used to drive instruction rather than rank and punish.

Children from middle class and other families with enough money will still do better than poor children...if they're afforded out of school opportunities by their families such as travel, museums, plays, and so on. Poor children, meanwhile will grow in numbers as the rich accumulate a higher and higher percentage of the nation's wealth.

We can end the testing madness in the United States and use assessment in an appropriate way, to provide information for teachers. We can, as Elizabeth Walters wrote in How Do We Improve Public Schools,


...allocate more resources for public schools — to improve technology, to expand professional-development opportunities for teachers, to buy classroom supplies, up-to-date textbooks and all the other materials that come with a good education. Perhaps one of the best ways to improve public education would be to loosen the strictures that tie student and school evaluations to test preparation and instead to allow teachers to instruct students in the sort of project-based units supported by educational research and the sort of critical-thinking skills that cannot be measured by filling in bubbles — the sort of academic freedom that is praised in charter schools but restricted in traditional public schools.

...and, I might add, praised in the private schools which the politicians, pundits and policy makers demand for their own children.

We don't have to write off nearly a quarter of our children to poverty. I wrote a few days ago,


Perhaps most importantly, one of the best ways to improve public education would be to work to alleviate those factors beyond teachers’ control that affect students’ ability to learn...unemployment, poverty, violence, crime rates, family instability, childhood hunger, access to health care.

What future will we leave to our children and grandchildren? What's in store for the babies born today in terms of their education? Will we only give opportunities for the wealthy and leave crowded underfunded public schools for the poor -- or can we find a way to provide equity and real appropriate public education for everyone?

*References to charters generally imply corporate, for-profit charter schools. Quotes from other writers reflect their opinions only. See It's Important to Look in a Mirror Now and Then