The first item in the Chicago Teachers Union report is about class size. Research has shown that class size is especially important in the early grades.


1. Recognize That Class Size Matters. Drastically reduce class size. We currently have one of the largest class sizes in the state. This greatly inhibits the ability of our students to learn and thrive.

Outside of Chicago and within private schools, class size is monitored and small classes are prioritized. For example, in the Matteson School District southwest of Chicago, the average class sizes per grade for elementary and high school are between 16 and 23, with most classes below 20. Compared to CPS, 15% more students meet or exceed Illinois standards in Matteson. At Chicago’s well-regarded Francis Parker School, class sizes reflect the national private school average of 18 students, but high school classes are often smaller. If smaller classes are good for private and suburban students, why are they not a priority for our children?

~~~
Got a red shirt?
Brian Jones is one of the teachers prominent in The Inconvenient Truth Behind Waiting for Superman.


Does this mean we now have a national movement of teachers united in a collective struggle to defend and improve public education? Not quite. Where teachers already have large organizations — their unions — they rely on them to defend their interests. The problem is that those unions have, by and large, conceded much of the ideological terrain to the billionaire privatizers.

Rahm Emanuel, the mayor of Chicago, says he wants a longer school day, for example. The CTU has responded, effectively: “No, we want a BETTER school day!” The CTU...demands that funding be restored to the arts, sciences, physical education, counseling, and smaller class sizes. Their research document, The Schools Chicago’s Students Deserve is a must read.

~~~
Messages of Solidarity: We Stand with the CTU 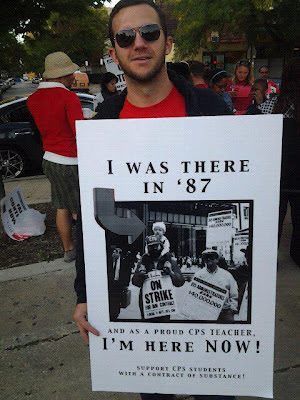 
Evaluations tied to student test performance, class size, job security and more are at the heart of the Chicago dispute and at the center of a national education debate. Are teachers professionals who know the needs of their students and deserve the respect and compensation afforded to professionals? Or are they public workers who can be easily replaced?


The issues that teachers are fighting for go to the heart of improving Chicago's public schools. Chicago has had 15 years of mayoral control, and it hasn't helped improve our schools. Today, 42% of neighborhood elementary schools are not funded for a full-time art or music teacher; 160 Chicago elementary schools don't have libraries. Teachers report classes of more than 43 students and not even enough chairs for them all. And teachers often lack textbooks and other materials up to six weeks after the start of school.

Chicago teachers are calling for a better day, not just a longer day, by investing in art, music and libraries. They are calling for smaller class sizes, investments in neighborhood schools and health care, social workers, meal services and additional services for students.

They want to focus on teaching and learning, and have legitimately objected to the district's fixation on high-stakes testing that is narrowing the curriculum and being used to sanction teachers. And they are calling for a fair evaluation process and additional professional development to help all teachers improve.

I can sense a pattern in these articles. They're all talking about what's really important...the education of the children. Here it is again...social services, libraries, a well rounded curriculum...


...educators are fired up to fight for wraparound services for students, with more school social workers, counselors and psychologists; a holistic educational environment where all students have access to school libraries, world languages, art, music, physical education; and the preservation of the tenure system—because good teachers are made through experience in the classroom.

~~~
National Schools Debate Is on Display in Chicago

...and then we come to the New York Times. It's true that, as the Times says, the teacher evaluation system in Chicago is one of the focuses of the strike. There are questions which need to be answered. Do standardized tests reflect what the students have learned or do they reflect where the students live, the amount of income their parents bring home, the violence outside the students' windows at home, whether or not the students even have a home, or the lack of health care in the students' lives? Are those same standardized tests appropriate tools with which to measure a teacher's ability to teach?

The article frames this as a "traditional labor fight over pay, benefits and working conditions." That's correct to a point. Both sides have said that they are close on pay disputes. Benefits are still an issue. It's the demands about working conditions, however, which are not at all "traditional." The teachers are demanding books on the first day of class...manageable class sizes...a well rounded curriculum including the arts...libraries for every school (would Emanuel choose to send his children to a school without a library?) and social workers to help children deal with the violence and the poverty in their lives. The fight is as much about children's working conditions as it is about the teachers' working conditions.


What started here as a traditional labor fight over pay, benefits and working conditions has exploded into a dramatic illustration of the national debate over how public school districts should rate teachers.

At stake are profound policy questions about how teachers should be granted tenure, promoted or fired, as well as the place standardized tests will have in the lives of elementary and high school students.

One of the main sticking points in the negotiations here between the teachers union and Mayor Rahm Emanuel is a new teacher evaluation system that gives significant and increasing weight to student performance on standardized tests. Personnel decisions would be based on those evaluations.

This article is not directly about the CTU strike, however it speaks to the issue of how much weight should be given to standardized tests This task force rejected using student test scores to evaluate teachers.


The state needs to focus on recruiting, educating and retaining teachers if it wants to improve student academic performance, a state task force has concluded. Recent budget cuts, however, have pushed the state in the opposite direction, according to the task force's report, which was released Monday.

The advisory task force, which was brought together by state Supt. of Public Instruction Tom Torlakson and the state Commission on Teacher Credentialing, also rejected making any link between students' standardized test scores and teachers' performance evaluations.


...leading research organizations have counseled against the use of VAM for high-stakes decisions about teachers. The National Research Council’s Board on Testing and Assessment concluded that: “VAM estimates of teacher effectiveness ... should not be used to make operational decisions because such estimates are far too unstable to be considered fair or reliable.”

It didn't say use test scores for 30% of a teacher's evaluation...or 40%...or 50%. It said that tests should not be used for teacher evaluation. Period.

The entire report can be read HERE