Teachers Save Lives While the Selfish Protect Money

The Courage of Teachers

Once again teachers are being given credit for saving the lives of the children under their care. The stories coming from Moore, OK tell of teachers who shielded children from falling debris and sang songs with their students to keep them calm. One report told of a teacher who refused to become "hysterical in front of [her] kids" even though her leg was impaled by a table leg.

...that someone publicly recognizes that teachers are entrusted with the lives of their students, despite being demonized by "reformers" and the press. In an excellent article titled Teachers: Heroes in a crisis–but otherwise under fire -- at least from a teacher's point of view -- Ned Resnikoff hit the nail on the head.


“You don’t go into teaching for the money,” Oklahoma Education Association president Linda Hampton told MSNBC Tuesday. ”You go into teaching because you care about the kids. You spend more of your waking hours as a teacher with those children than anyone does, and they become your children. And just like any parent, you’re going to protect them at all costs."

Yet the role of protector during the hours in which children are in their care sometimes seems to have been lost in the public debate about education. Rarely recognized as champions of their students, public educators are more often targets of small-government conservatives and education reformers. Teachers across the country have watched their profession chipped away by school closures, mass layoffs, budget cuts, and other measures. Pressure to deliver top test scores has led to backlashes in some areas of the country. And cheating scandals, in which some educators altered scores to help advance their schools or protect themselves, harmed the reputations of teachers nationwide just as many were struggling to keep their jobs. 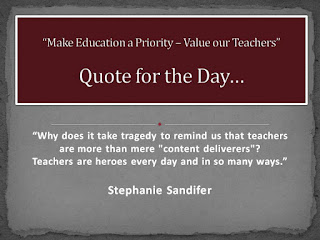 Teachers are praised for their courage in a crisis, yet are accused of being union thugs, not caring about anything but their paychecks, and only going into teaching because of the time off in the summer. The number of bad teachers, according to some "reformers" or their mouthpieces, must be enormous. So they espouse unproven solutions such as evaluating teachers using student test scores, privatizing public education and removing teachers' job protections while ignoring the fact that struggling schools are struggling not because of "bad teachers" but because of the unresolved social conditions associated with poverty.

Yet we've seen over and over again that the first duty gladly accepted by teachers is to their students.

In stark contrast to the love that teachers exhibit for their students during a crisis...and every day...are those who are selfish enough to let nearly a fourth of our students struggle along while living in poverty...the second highest poverty rate among "wealthy" nations. While tax breaks get renewed for the wealthy, the selfish ones complain that we shouldn't provide health care for our citizens and that taxes are just a form of government theft. While the disparity gap between rich and poor increases, the selfish ones fight against jobs programs, choosing instead to let the wealth trickle down from above. While teachers put themselves in harms way to protect their students, the selfish ones fight against providing help in the form of federal relief for disaster victims.

It's the "I've got mine. Go get your own" attitude which only seems to disappear when there's a crisis...but not completely.

[NOTE: the following quote had incorrect casualty figures. The author's update is included in italics at the end.]


Before the final body count has even come in...a pathetic excuse for a human being, GOP Senator Tom Coburn, will apparently require offsets to spending before he votes in favor of disaster relief for the areas of Oklahoma devastated by tornadoes on Monday.

Yes, you’ve read that correctly. Even with 20 children confirmed dead, along with 31 others (as of 12:30 am CDT), and countless others with their lives destroyed, this sorry excuse for a human is already playing politics with the lives of Americans who are in desperate need of help.

...Updated death toll as of 4:30 pm CDT 5/21, the medical examiner’s office has said that earlier reports were erroneous. The current death toll stands at 24 confirmed, including 9 children.

The selfishness of some people is amazing.

[UPDATE: From Indiana Coalition for Public Education--Monroe County and South Central Indiana.
Teachers: Protective Saviors or Overpaid Babysitters--You Can't Have It Both Ways


It is not enough that we commend teachers for their heroism in the face of tragedy when they throw their bodies in front of bullets or flying debris from tornadoes. Those events are symbolic of what teachers do for our kids and our society every single day. The smaller acts of heroism: connecting to a hard-to-reach child and giving him a feeling of self-worth, helping a kid to find her passion, discovering what the special key is to how these children learn, these are just some of the ways that teachers change lives.]