The Push Towards Privatization

They're all being considered for privatization in one state or another.

Apparently privatization is the cure-all for society's ills. The movement to privatize all public sector institutions and jobs is based on the assumption that government is always inefficient and bad...the private sector (free market) is always more efficient and good.


Neoliberal Republicans and Tea Partiers (and now Barack Obama and Department of Education director Arne Duncan) give lip service to improving achievement levels for students in inner city schools. However instead of improving funding to these struggling schools, the one intervention supported by statistical research, they continue to aggressively shift education funding from public schools to private charter schools – despite the Stanford study showing that charter programs don’t improve achievement levels (see previous blog). In my mind, this is totally consistent with what I believe is their real agenda – namely privatizing public education.

Neoliberalism seeks to privatize all public services (education, social security, water, prisons, public transportation, welfare services) – leaving a bare bones government with a strictly security and military role. Neoliberals argue that public provision of these services is inefficient and wasteful – problems that can only be corrected by subjecting them to free market competition. But as we have seen in the case of prison, water, and welfare privatization, there are always windfall profits for businesses and corporations when billions of public, taxpayer dollars are transferred to private hands.

In other words, privatization isn't just for education...it's for everything.

That's wrong. Instead of destroying public institutions we should support them and improve them where necessary. Public oversight is essential in a democratic society.

There is so much money spent on public education...edupreneurs are chomping at the bit to get some of it. The "product" is education...and they'll jump in without any previous experience using "business" methods (think: Enron) to run their "schools." The result has not helped children learn. The motive is profit...not the education of our youngest citizens.


Private online learning companies will get a better shot at Florida public school funding under a bill that won approval on the final day of the legislative session.

Though the vote garnered little attention from outside observers, Republicans hailed it as among the year's most important victories for school choice.

..."If you want to get at the largest portion of the state budget that has not been privatized, it is education," said Jeff Wright, who oversees public policy advocacy for the Florida Education Association, the state teachers union. "That's what this is all about. This is about allowing outside vendors to get a piece of the action."

It takes money to win an election. This is true at local levels as well as national. More and more state legislators are taking money from wealthy donors to win their local elections, thereby aligning themselves with the policies of the donors. The citizen legislators envisioned by the founding fathers has given way to professional politicians.


“Whenever a man has cast a longing eye on offices, a rottenness begins in his conduct.” – Thomas Jefferson

“The truth is that all men having power ought to be mistrusted.” – James Madison


A fundamental struggle for democracy is going on behind the scenes in statehouses around the country, as a handful of wealthy individuals and foundations pour money into efforts to privatize the public schools.

...So it was fascinating when investigative reporter Dan Bice of the Milwaukee Journal Sentinel ripped the veil off a secretive organization and its hidden political activities by publishing a copy of the American Federation for Children's "2012 Election Impact Report."

The report, which was clearly meant only for members and donors, outlines how the American Federation of Children pours millions of dollars into state races around the country to back candidates who support school vouchers and other measures that siphon public money into private schools.

Supporters of public education must understand that the goal of "reformers" isn't improved education. It's privatization. The "reformers" will use the promise of improved education to get their policies adopted, then, when the education doesn't improve (and privatization schemes haven't improved the education of our children), they'll abandon that reason and switch to another...usually choice. The argument is that parents deserve "choice" in where they send their children to school, just like they do when they buy groceries or shoes. The choice, however, ends up belonging to the corporate bottom line of the school...to profit, not to parents. Children who are hard to educate or who don't toe the line will often be asked to go elsewhere.


Legislators should be skeptical of a proposal by Gov. Scott Walker to sharply expand the school voucher program. There isn't much evidence that students in voucher schools are better educated; in fact, they seem to perform at about the same level as their peers in mainline public schools.

No Child Left Behind, when adopted, was touted as a plan which would help those children whose needs were being systematically ignored. The rationale for the law was laudable, however, in actual practice NCLB, along with it's successor, Race to the Top, has done the opposite. More and more children are left behind as schools are closed and resources are eliminated.


A writer recently hailed federal and state education reform as a new civil rights movement. But the word reform, which means “the improvement . . . of what is wrong, corrupt, unsatisfactory,” can hardly be applied to the recent changes in educational law. Most of these changes are not for the better. Instead, they create a separate and wholly unequal educational system masquerading as choice, which serves to destabilize and discredit public schools in the name of improvement and to make state funds accessible to a wide range of individuals and corporations with little or no oversight.

This article examines recent legislation that dramatically expanded state takeover of schools after Hurricane Katrina, shows how the changes are contrary to educational research on effective schools, and points to some examples of schools and programs gone awry under this new regime.

The Parent Trigger Bill: A shot at privatization

Parent trigger bills provide for a small number of people, who happen to be parents of current students in a school, to give away a public institution paid for through years of taxpayer investment. Millions of public dollars go into building, maintaining and staffing public schools. Fifty-one percent of this year's parents shouldn't have the right to give that away. We need to support and improve public education...not destroy it.


Careful analysis of this legislation reveals its clear but unstated goal, public dollars for private companies and a diversion of resources from the public education system. Since 1991 the Legislature has reduced state funding for our schools from 62 percent to 49 percent. They have created charter schools that take money out of the public school system and are currently considering allowing charter schools to receive capital outlay dollars. These taxpayer dollars are designated to be used for maintenance and repair of public school buildings. Now, we are considering giving taxpayer dollars and buildings to private corporations.


For a group of politicians who claim they want to strengthen our public schools, the Honorables have a strange way of going about it. In their world, better public schools can be had only by siphoning off students and money into charter and private schools, and by eliminating the cap on class sizes in the lower grades, a factor that has been shown to improve academic achievement. At the same time, the same group of lawmakers is working to put tight caps on preschool education, another success story in education.

No, the way the Honorables in the General Assembly are going, the result can only be weaker public schools left with fewer resources to teach the very students the so-called educational improvements were designed to help. Is that their actual intent? 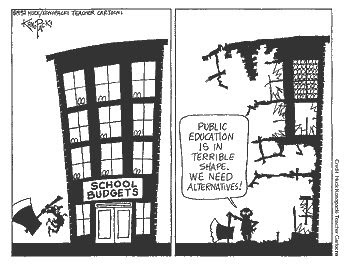