While the public schools are struggling with inadequate funding, legislators in Indiana are considering forgiving loans to "failing" privately run charters*...and private schools are getting a significant increase through Indiana's expanded voucher plan.

There's an open movement to privatize public education (as well as just about everything else) in America. Those who favor privatization are clear that their goal is to remove public control. One of my posts about privatization got this response from "tiffany"... 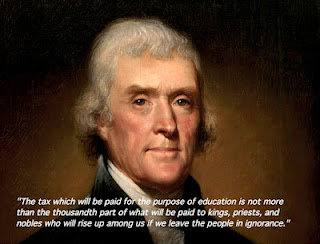 While not all pro-privatizers would consider all tax money as "theft" the purpose is clear...to remove public control of institutions and place it in private hands. Their point is, I think, that "the market" always does better than the government in everything.

To that end, the governors and legislators of states like Indiana, Wisconsin, Ohio, Michigan, Florida, New Jersey, Pennsylvania and elsewhere have crafted legislation (or taken legislation crafted by ALEC) to "redistribute" public funds from public education to private schools and privately operated charter schools.

A reader of Diane Ravitch's blog listed the steps being taken by pro-"reform" legislatures to destroy public education. Much of the following Surefire Plan to Destroy Public Education has been put into practice (and not just in Texas). Even with the widespread community and parent backlash in places like Chicago and New Jersey, the privatizers are making progress...pushing their agenda.

Obviously many people are in favor of privatization. Those of us who oppose it have less money to buy politicians. The election in Indiana of Glenda Ritz over privatizer-pet Tony Bennett shows, however, that a strong, hardworking group of people can overcome the privatization-based money bent on destroying public education.


What keeps many of us fighting 20 hours a day and digging into our own pockets to fund the work is our understanding that these bills are not the end game. We’ve read the web sites, beginning with Milton Freidman’s epistle on the Cato Institute’s website, that lay out the insidious plan we are seeing played out. We have also read Naomi Klein’s brilliant book, Shock Doctrine.

[emphasis added]
And then only the wealthy will have schools for their kids.

During the last presidential election Mitt Romney gave voice to the effect of privatization on America's public education system. He said,


I want to make sure we keep America a place of opportunity where everyone has a fair shot. They get as much education as they can afford and with their time they're able to get...and if they have a willingness to work hard and with the right values they ought to be able to provide for their family and have a shot at realizing their dreams. [emphasis added]

The phrase, as much education as they can afford has, as its corollary, the fact that those who can't afford it won't get it. So the Romneys, the Obamas, the Gates, the Emanuels and the Duncans will continue to attend expensive private schools while those who have no money will have to make do with whatever "they can afford." That's the definition of Romney's "fair shot."


A fundamental struggle for democracy is going on behind the scenes in statehouses around the country, as a handful of wealthy individuals and foundations pour money into efforts to privatize the public schools.

The implications are huge. But the school privatizers, and their lobbyists in the states, have so muddied the waters that the public does not get a clear picture of what is at stake.

So it was fascinating when investigative reporter Dan Bice of the Milwaukee Journal Sentinel ripped the veil off a secretive organization and its hidden political activities by publishing a copy of the American Federation for Children's "2012 Election Impact Report."

The report, which was clearly meant only for members and donors, outlines how the American Federation of Children pours millions of dollars into state races around the country to back candidates who support school vouchers and other measures that siphon public money private schools.

Addendum to The Surefire Plan to Destroy Public Education


5a. Claim that "poverty is not destiny" and use that as an excuse to ignore the high levels of child poverty in America and it's relationship to lowered achievement.


Re: Obama wants faster Internet in US schools. Would you pay $5 a year for it? (June 6). Twenty-three percent of American children now live in poverty, the second highest among 34 economically advanced countries. In comparison, Finland has less than 5.3% child poverty. Poverty means poor nutrition, hunger, and inadequate health care; all of these have a profound negative impact on school achievement.

Next-generation broadband and high-speed wireless are of little help when children are hungry or ill.

What if Finland’s great teachers taught in U.S. schools?


In recent years the “no excuses”’ argument has been particularly persistent in the education debate. There are those who argue that poverty is only an excuse not to insist that all schools should reach higher standards. Solution: better teachers. Then there are those who claim that schools and teachers alone cannot overcome the negative impact that poverty causes in many children’s learning in school. Solution: Elevate children out of poverty by other public policies.

For me the latter is right. In the United States today, 23 percent of children live in poor homes. In Finland, the same way to calculate child poverty would show that figure to be almost five times smaller. The United States ranked in the bottom four in the recent United Nations review on child well-being. Among 29 wealthy countries, the United States landed second from the last in child poverty and held a similarly poor position in “child life satisfaction.” Teachers alone, regardless of how effective they are, will not be able to overcome the challenges that poor children bring with them to schools everyday. 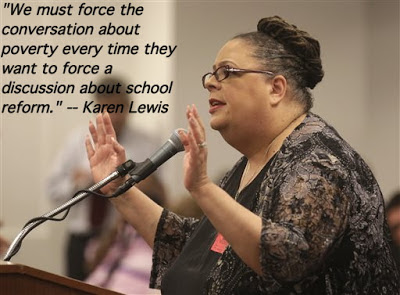