According to Arne Duncan, "Poverty is not destiny..." Jerry Bracey would respond, "Poverty is not an excuse. It's a condition. It's like gravity. Gravity affects everything you do on the planet. So does poverty."

I accept that "poverty is not destiny," however, while Duncan and the "reformers" are quick to give examples of high poverty children and schools which have succeeded, they ignore the effect that poverty has on the millions of children who are struggling. They use outliers as "proof" that poverty doesn't matter when we (and they) know that it does.

Spouting phrases like "poverty is not destiny" is an excuse to ignore it...to ignore the fact that our legislators, governors, and presidents have failed to resolve issues like poverty. It's much easier to find fault with America's public schools than to take on the difficult issues facing the country.

We are a profoundly divided nation...and the greatest divide is economic. While politicians try to destroy each other...while lobbyists buy legislators...while the wealthiest individuals control more and more of this country's resources...more than one fifth of our children live in poverty and attend underfunded schools. We know that there is a high correlation between a child's family and his/her academic achievement, yet, instead of providing health care, counselors, transportation, and other wraparound services, such as those suggested by the Chicago Teachers Union, we close schools, which punishes students for living in poverty, and punishes teachers for dedicating their lives to helping at-risk children.

Politicians and policy makers don't want to accept the fact that it is they who have failed, so they look for a place to lay the blame.

The biggest scandal in America

Valerie Strauss is one of public education's strongest voices...


There are many ramifications for this in the realm of public education. Because public schools are largely funded by property taxes, schools in high-poverty areas have fewer resources. Federal dollars appropriated to help close the gap don’t come close. Furthermore, if there is anything that education research has shown consistently and conclusively, it is that student achievement is linked to the socioeconomic level of families. Students who attend low-poverty schools do well on international test scores, as well as students in any other country.

Here is Jonathan Kozol's speech at the Save Our Schools March in DC, 7/30/2011. No one over the last 40 years has spent as much time advocating for poor children as Kozol.

Protecting Students Against the Effects of Poverty: Libraries

Protecting children from poverty a better investment than the common core.


The major reason for our unspectacular school achievement is our level of child poverty, now 23%, the second highest child poverty level among 35 “economically advanced” countries. Poverty has a devastating impact on school performance. When we control for poverty, American children's international test scores are near the top of the world.

There is no evidence that more rigorous standards and increased testing improve school performance.

There is strong evidence that that protecting children from the effects of poverty will increase school performance: Strengthening food and health care programs, and providing better support for libraries and librarians is a much better investment than the common core.

Poor Teaching for Poor Children … in the Name of Reform


Those who demand that we “close the achievement gap” generally focus only on results, which in practice refers only to test scores. High-quality instruction is defined as whatever raises those scores. But when teaching strategies are considered, there is wide agreement (again, among noneducators) about what constitutes appropriate instruction in the inner city.

The curriculum consists of a series of separate skills, with more worksheets than real books, more rote practice than exploration of ideas, more memorization (sometimes assisted with chanting and clapping) than thinking. In books like The Shame of the Nation, Jonathan Kozol, another frequent visitor to urban schools, describes a mechanical, precisely paced process for drilling black and Latino children in “obsessively enumerated particles of amputated skill associated with upcoming state exams.”

Not only is the teaching scripted, with students required to answer fact-based questions on command, but a system of almost militaristic behavior control is common, with public humiliation for noncompliance and an array of rewards for obedience that calls to mind the token economy programs developed in prisons and psychiatric hospitals.


...despite their best efforts at reducing inequalities, inequalities do not easily go away, with the result that America’s schools generally work less well for impoverished youth and much better for those more fortunate. Recent test results from America’s National Assessment of Educational Progress (NAEP) and from the international comparisons in both the Trends in International Mathematics and Science Study (TIMSS) and the Program on International Student Assessment (PISA) all show this pattern. Figure 1 (following), from TIMSS 2007, illustrates how closely linked school scores are to the school’s enrollment of low-income students. Comparing the scores of schools in 58 countries in the TIMSS pool against only wealthier American schools, instead of overall averages, makes the link clear. Looking first at the American schools with the lowest levels of poverty—where under 10% of the students are poor—we find that the average scores of fourth grade American students are higher than in all but two of the other 58 countries.6 Similarly, in American schools where under 25% of the students are poor, the average scores of fourth grade American students are higher than all but four of these other countries.

Hunger, Academic Success, and the Hard Bigotry of Indifference

Map: How 35 countries compare on child poverty (the U.S. is ranked 34th)


UNICEF’s data is important for measuring the share of children who are substantively poorer than their national average, which has important implications for the cost of food, housing, health care and other essentials. Its research shows that children are more likely to fall below this relative poverty line in the United States than in almost any other developed country. 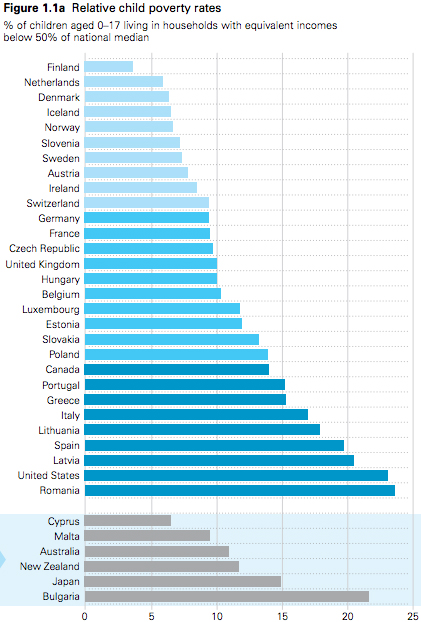 Does America Really Care About Its Children?


I'm really not interested in hearing politicians on either side of the aisle talk about "reform" when they can't even keep per pupil spending at least constant (and that's not even counting for inflation!). And I'm especially uninterested in hearing billionaires tell us their latest wacky schemes to "reform" our schools when the money that's not being spent on our children is winding up in their pockets.


No school can make up for years of neglect before a child reaches school age. No school can correct the damage done by lead poisoning or poor nutrition as the child grows. No school can teach a child who has been traumatized by violence. Closing public schools and opening militarized charter schools - such as our new Secretary of Education did in Chicago - do not solve the problem caused by years of social indifference. “Better” tests don’t improve teaching and learning. You don’t fatten the cow by weighing her with a better scale.

Schools need to be included as part of the solution to the problems of generational poverty, crime and malnutrition - absolutely…but someone has to carry the ball back to the children’s homes…and someone has to deal with the other 18 hours a day that the children are not in school.