Last month the University of Walmart Arkansas released a report -- from their Department of Education Reform -- that showed charter schools are underfunded.

Max Brantley at the Arkansas Blog, no friend of the Waltons, reported the following.


The Walton-subsidized University of Arkansas has issued a news release today about a report from a Walton-financed arm of the UA, the Department of Education Reform, that more money is spent on conventional public school districts than on charter schools, which the Walton heirs are spending hundreds of millions to promote in the United States, often to the detriment of existing public school districts.

He also suggested a few reasons that charter schools are not getting as much as real public schools.


I believe there are some understandable factors that lessen the the drama about the gap, ranging from less-experienced teachers who are paid less, differences in facilities and extra money given to public school districts for such considerations as desegregation plans (money to be phased out in Little Rock, for example) and federal money for poor students.

The charter schools also include virtual charters with huge "class sizes" and no building maintenance costs. Not to mention the charter habit of weeding out more expensive to educate children...

Perhaps the Walton sponsored report is correct...that charters do get less taxpayer money than real public schools, but charters also have corporate and state sponsors which subsidize their operations...for example.


Since 2002, the [DC Prep] charter network has received close to $1.2 million from Walton in direct grants. A Walton-funded nonprofit helped DC Prep find building space when it moved its first two schools from a chapel basement into former warehouses that now have large classrooms and wide, art-filled hallways.

One-third of DC Prep’s teachers are alumni of Teach for America, whose largest private donor is Walton. A Walton-funded advocacy group fights for more public funding and autonomy for charter schools in the city. Even the local board that regulates charter schools receives funding from the Walton Family Foundation. 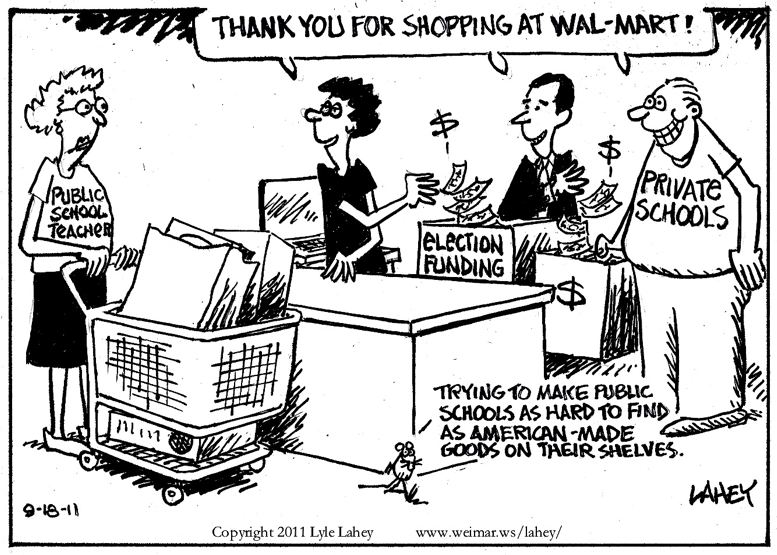 So aside from the fact that this charter company uses novice, untrained, and cheaper, teachers (and most charters don't have those pesky unions to negotiate a living wage and reasonable working hours), the Waltons have dumped $1.2 million on them.

In Indiana, the 2013 state legislature added to the profitability of charters by forgiving more than $90 million in start up loans.

Charter schools use public funds...but are apparently running short. Perhaps it's in the way they are handling their budget. Unfortunately, many charters spend public money without any public oversight...and today, Bill Moyers reported on fraud, mismanagement and waste.


According to the study, fraud and mismanagement of charter schools fall into six categories:
The report looks at problems in each of the 15 states it covers, with dozens of case studies. In some instances, charter operators used tax dollars to prop up side businesses like restaurants and health food stores — even a failing apartment complex.

The Bush administration co-opted teacher appreciation week back in 2002 and President Obama continues the slap in the face of real public school teachers. In this year's proclamation he wrote...


During National Charter Schools Week, we pay tribute to the role our Nation's public charter schools play in advancing opportunity, and we salute the parents, educators, community leaders, policymakers, and philanthropists who gave rise to the charter school sector. 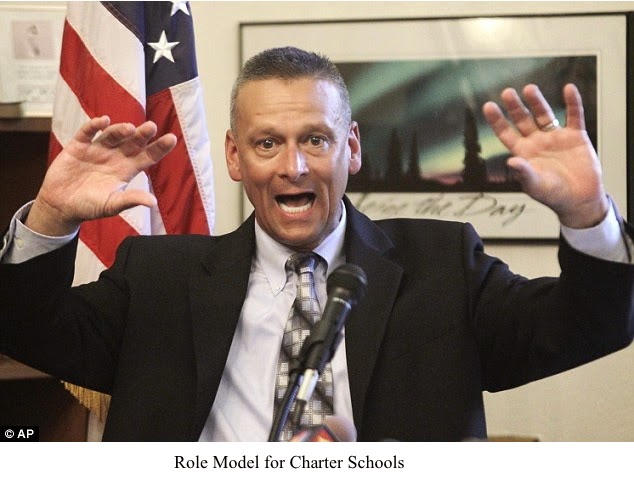