Waste, Fraud and Abuse in the Charter Industry: Your Tax Dollars at Work

Earlier this week the Washington Post reported on legislation introduced to increase federal funding for charter schools. Once more proving that the public education privatization movement is a bipartisan idea, the Post noted that two Democrats and two Republicans have signed on to the Senate version of the bill. On the House side, there is one Democratic sponsor and one Republican sponsor. The Democrat in the House, George Miller, was the House co-sponsor (with John Boehner) of the 1971 No Child Left Behind Act.


“We're going to build on the success of charter schools with this bill,” said Sen. Mary Landrieu (D-La.), a key sponsor, who said the legislation would permit the development of 500 charter schools per year across the country.

On the other side of Congress, the effort has been spearheaded by Rep. John Kline (R-Minn.) and Rep. George Miller (D-Calif.), the chairman and ranking member of the House education committee.

The bill would increase charter funding at the federal level from $250 million to $300 million.

Two of the people mentioned in the article, Landrieu and Kline, received campaign funding from Koch Industries...and Landrieu also pocketed campaign contributions from McGraw-Hill and Edison Schools. Michael Bennet received a large chunk from Anschutz Corporation. Oddly enough Bennet also got money from Denver Public Schools and the AFT. All the sponsors have received money from a wide range of groups and individuals from hedge fund, investment, and banking industries (See Open Secrets for more information on donors). Corporate America wants the continued privatization of public education...and their representatives in congress are working to give it to them.

It's not a lot of money compared to other federal budget items, however when added to Race to the Top funds, which are given to states who agree to, among other things, increase the number of charter schools, it comes to quite a bit. 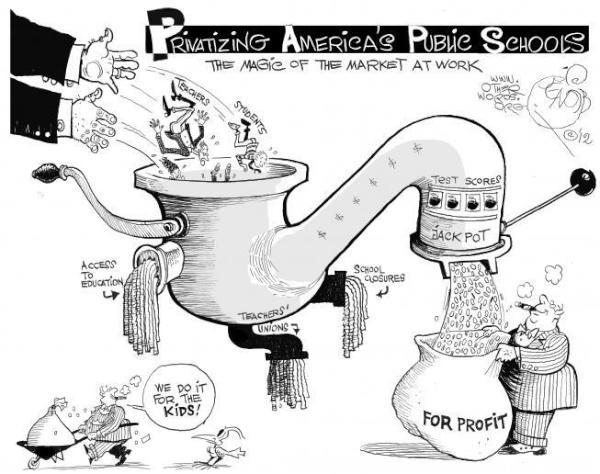 The announcement of the legislation coincided with Teacher Appreciation Week National Charter School Week and followed on the heels of President Obama extolling the praises of charter schools.


...we pay tribute to the role our Nation's public charter schools play in advancing opportunity, and we salute the parents, educators, community leaders, policymakers, and philanthropists who gave rise to the charter school sector.

The President's proclamation notwithstanding, the announcement also coincided with the release of a report detailing waste, fraud and abuse in the charter school industry.


“Charter School Vulnerabilities to Waste, Fraud And Abuse,” authored by the Center for Popular Democracy and Integrity in Education, echoes a warning from the U.S. Department of Education’s Office of the Inspector General. The report draws upon news reports, criminal complaints and more to detail how, in just 15 of the 42 states that have charter schools, charter operators have used school funds illegally to buy personal luxuries for themselves, support their other businesses, and more. The report also includes recommendations for policymakers on how they can address the problem of rampant fraud, waste and abuse in the charter school industry. Both organizations recommend pausing charter expansion until these problems are addressed. [emphasis added]

It seems that some of the "opportunity" the President referred to had to do with the opportunity for graft and corruption in the privatized control of public funds without any public oversight. We obviously didn't learn anything from the banking industry's example.

The corruption in the charter industry shouldn't be rewarded with more money. Charters have a history of increasing racial and economic segregation and manipulating enrollment to weed out difficult to educate students. Charters do not perform better than real public schools and they don't improve education.

TAKE CONTROL OF THE CHARTER INDUSTRY 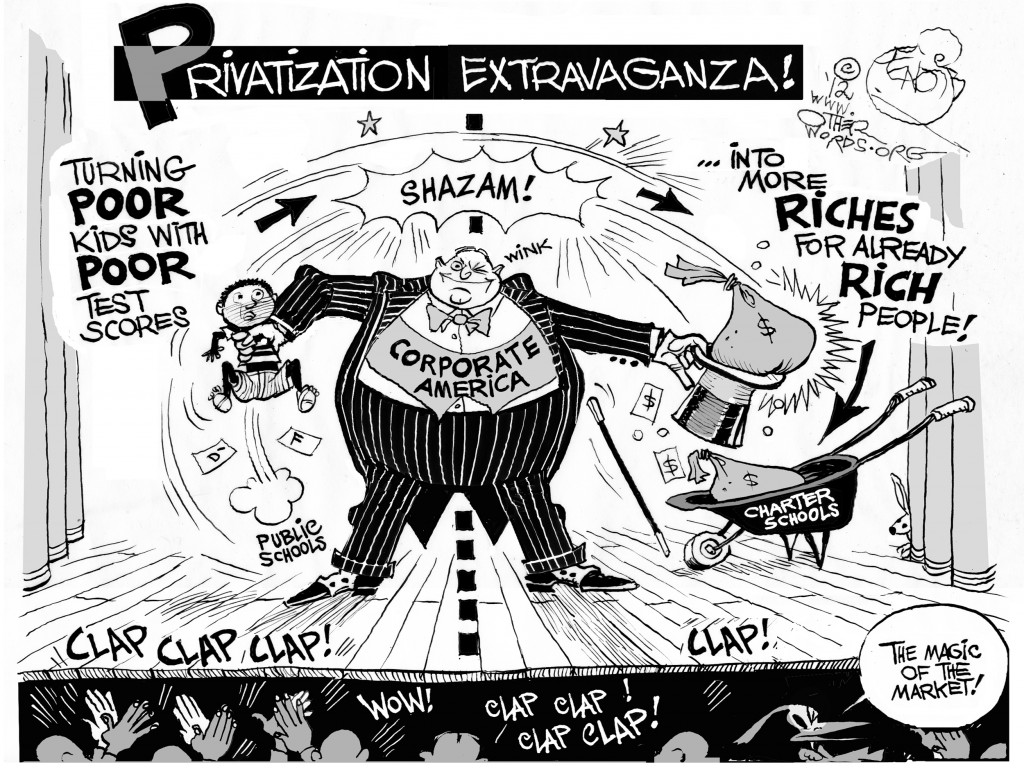