The conservative/Wall Street/1-percent/Republican anti-government strategy is to set government up to fail (usually by starving it of funding). Then they point to the resulting "crisis" they created and say that it proves that government doesn't work and that we should therefore "privatize" it -- in other words, rig the system against the majority by handing our common wealth over to a few wealthy people to harvest for personal profit.

When applied to public education, it's a simple three step recipe.
That is exactly what's happening to American public education. School crises have been manufactured and blame has been placed on the victims for its "failures." Privatizers swoop in and declare that everything is better privatized.

The problem is not unique to Indiana. 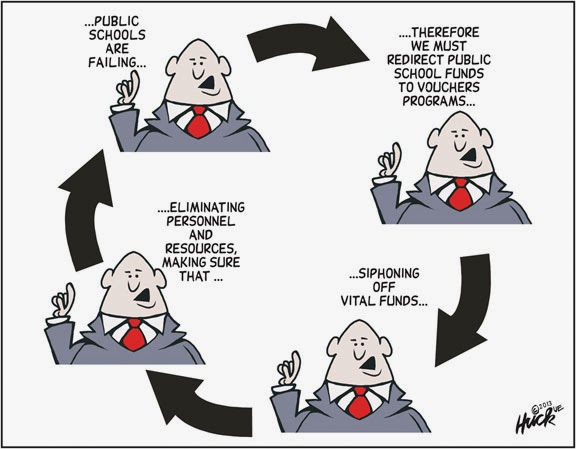 I refuse to call charter schools, "public schools." They are private schools run with public funds. Charter schools can manipulate their population so only well motivated and higher achieving students remain. This is, according to Michael Petrilli, a feature of charter schools, not a problem.

Separating fact from fiction in 21 claims about charter schools


There are a number of actions charter schools take to help ensure that they can end up with a more homogeneous set of higher-performing students. In some cases charter schools use admission tests to determine “academic interest.” In other cases, charter schools such as KIPP use “admission” or “placement” tests to make decisions on student grade levels assignments. Rather than be held back one to three grade levels, struggling students often simply return to the district school so they can stay with their peer group.

Many of the so-called “no excuses” charter schools use grade repetition as a means of weeding out weaker students. (Empirical research shows that the most prominent predictor of a student dropping out of school is requiring them to repeat one or more grade levels). Harsh or push-out school discipline practices can also drive away more difficult students or drive them out once enrolled.

The Trouble with Belief


Where charters succeed (or do at least as well as their public counterparts) it is because they believe only in certain students who meet certain qualifications and behave in certain ways and produce certain results. [emphasis added]

Peter Greene's article about belief includes an accurate articulation of what a public school ought to be...


There are very few charters out there using a sales pitch of, "We believe that all students can succeed and we will accept any and all students and keep them till the bitter end, no matter what, because we will find a way to help them succeed." [emphasis added]

[It must be stated that Greene is correct when he states, "There are very few charters..." This means that there are some charters which do a good job and place students before profits. You know who you are.] 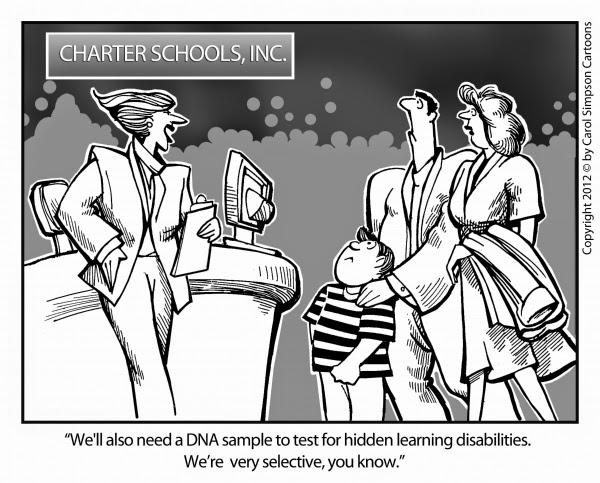 Why Don’t We Have Real Data on Charter Schools?

Public education systems are run by publicly elected school boards (or ought to be). They hold public meetings, are required to have annual audits, and are accountable to the voters in their district.


The problem here is that charter schools are frequently not accountable. Indeed, they are stunningly opaque, more black boxes than transparent laboratories for education. According to a 2013 study by the Center for Research on Educational Outcomes at Stanford University, only 29 percent of charter schools outperformed public schools with similar students in math, while 31 percent performed worse. Most charter schools, in fact, obtained results that were no better than traditional public schools. So what was that 29 percent doing right? And what went so wrong with the failing 31 percent? There are a few reasons why it’s nearly impossible to find out.

PRIVATIZATION IN THE MIDWEST


About half of traditional public schools would see funding cuts over the next two years under Kasich’s education funding plan, though it spends $459 million more. The non-partisan Legislative Service Commission calculated that charter-school funding will rise 5.4 percent over two years, with no schools facing a cut.


These new, private charter school authorizers “would have no disclosure obligations, would not be subject to the open records law, and would not be bound by conflict of interest restrictions,” he wrote. And they could pay their officers whatever they choose to.

Funding for the new charter schools — $8,075 per student — would come right off the top of the state’s appropriation for general state aid to the state’s school districts. Hughes said.

So, Walker’s “unprecedented scheme” to establish new charter schools all over the state would tap the funding of local public schools to fund private schools approved by private organizations with little accountability.

An important step in the privatization of public education (and other public services) is to buy legislators who will then be beholden to their donors.

Charter Schools USA, H4QED, and the Indiana State Board of Ed


Red Apple Development, the real estate branch of CS USA, has also given big money: $17,000 since 2012. This year they contributed $5,000 to the Hoosiers for Quality Education PAC, which funds David Long, Brian Bosma, and a whole slew of Republicans now attacking Glenda Ritz and teachers.

Recipe for privatization of public education:
The School Closure Playbook


This video explores how Chicago’s education “reformers” manufactured a budget crisis through a combination of creative accounting, secretive tax schemes, and media cooperation. It then looks at the dramatic consequences of school closures, the corruption endemic to privatization, and the community organizing that developed to regain control of schools and fight for public education. 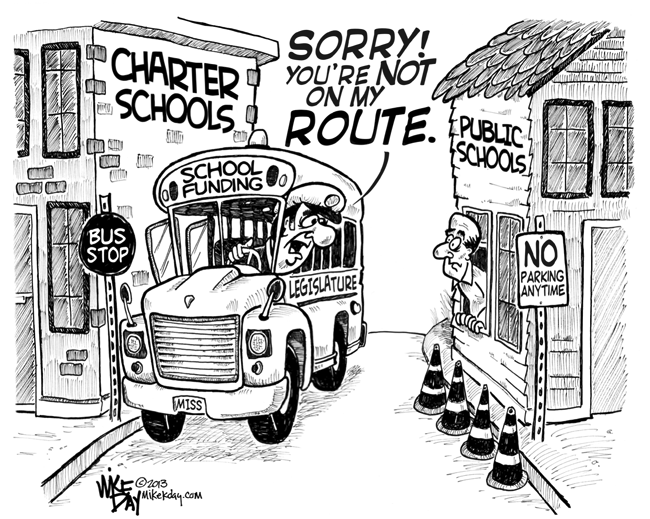