When I was in middle school and high school, Asimov was one of my most important teachers. This isn't to say that my Chicago Public Schools teachers didn't do their best to get this difficult-to-educate student motivated to learn...but Asimov did it better.

It was his science, not his science fiction that started me on the road to Asimov fanhood. I began reading his science essays some time in the early 1960s.

I had discovered science fiction when I was in middle school and started buying pulp sci-fi magazines. One of them, The Magazine of Fantasy and Science Fiction (which has been in continuous publication since 1949), had science articles by Asimov. After I read one I searched the magazine monthly for Asimov, not science fiction.

I learned science from this reading, and as the years passed, I also learned more about Asimov the writer, and Asimov the person. He was a Renaissance man...a voracious reader and writer, knowledgable in dozens of academic areas, not just science. He taught me sociology, psychology, literature, history, philosophy, and religion. His books and articles were the ones which kept my interest...not my textbooks.

When I took science classes, especially biology and chemistry, I remember thinking that I was a real scientist, like Asimov. It's interesting that in my generally unsuccessful high school career, the science classes were the only ones I consistently did well in. [It's also likely that my father, with his Ph.D in Chemistry from the University of Chicago, influenced my interest and ability in science as well.]

Here then, in honor of his 96th birthday, are some of Isaac Asimov's quotes.

In 1988, Asimov, along with Jason Shulman, wrote, Isaac Asimov's Book of Science and Nature Quotations. In it, he wrote


The true delight is in the finding out rather than in the knowing.

Preschoolers and Kindergarteners know this. The wonder of learning is in discovery. 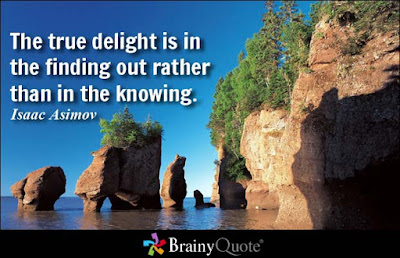 Even as a professional, Asimov knew that discovery did not always follow expected paths. New discoveries sometimes just happen. The "teachable moment" is not something teachers plan. It, also, just happens.

In an interview with Bill Moyers, Asimov asserted that people think of education as something you finish. Good teachers understand that learning is something that needs to continue throughout one's life.

Asimov made his statement as a criticism of the current education system. Graduation makes education a "rite of passage" and many think that once they graduate, they're done. In contrast, Asimov considered learning to be a life-long pursuit. 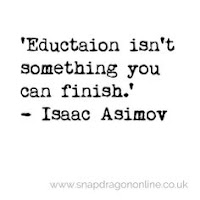 The teacher reaches out, continuing to try to reach his students...day after day, year after year. There's no way that one teacher, working alone, can do it all. But we keep trying...

From his book, The Relativity of Wrong: Essays on Science. 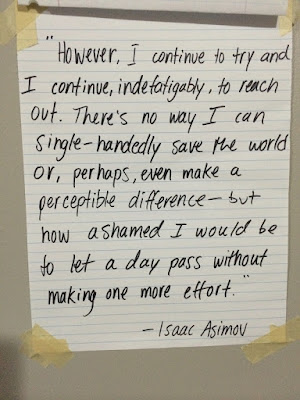 
We are facing problems that transcend nations...


Asimov taught himself to read before he went to school...and he graduated from high school at age 15. He went on to earn a B.S., an M.A. and a Ph.D. in chemistry from Columbia University. He left us with more than 500 volumes filled with his ideas, imagination and knowledge. 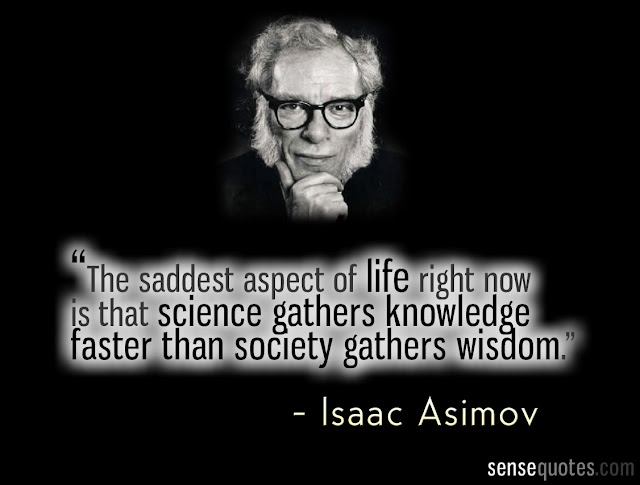 For more on Asimov...

My favorite non-fiction works by Asimov were his articles in The Magazine of Fantasy and Science Fiction. Those have been collected into quite a few books. My favorite Asimovian fiction writings are two short stories which later grew into novels: Nightfall, and The Ugly Little Boy.