Be a Republican – Bust a Union

This was posted today by Chalkbeat Indiana...

Bill to loosen union control of teacher pay moves ahead: Democrats on the House Education Committee and ISTA officials opposed the bill


Lawmakers moved ahead with a bill today that would weaken teachers unions’ control over where teachers are placed on salary scales they negotiate for all teachers.

Unions don't control teacher pay any more than school boards control teacher pay. Collective bargaining in Indiana, even though it was severely limited by the legislature in 2011, still allows teachers and school systems to come to an agreement about teacher pay and benefits based on mutual cooperation. Teachers don't demand and get whatever they want. School boards don't announce and get whatever they want. Collective bargaining means that teachers and school boards work together to agree on what's best for their individual school corporation.

THE HURT GOES BOTH WAYS


Educational issues that used to be negotiated, like class size or school calendars, are now off the table.

The bill in question, HB1004, would allow schools and school systems to bypass the collective bargaining process and pay some teachers – those in shortage areas like science and special education – more money than other teachers. The union is against this because


...it circumvents unions and could pit teachers against each other.

It also circumvents school boards...it circumvents the ability of teachers and school boards to cooperate. Schools and school systems work best when everyone works together. This plan is a threat to that cooperation and a way to open up the salary system to all sorts of corruption. Do we really want schools to pay their teachers like sports teams pay their players...so they compete for the high paying jobs, jump ship to another school where they can be the superstar in order to rake in the big dollars, hold out for more money?

Hint: No, we don't. A school works best when the staff works together. Why would an experienced teacher want to help a new teacher who might replace him in his high paying position? Why would a young energetic teacher want to share ideas with an older teacher when they could use their new ideas to take over the high paying job? And who will be the big losers if this happens? The students.


“The heart of the teacher shortage in terms of retention is a professional wage, and these bills don’t address that,” said Gail Zeheralis, the union’s lobbyist. “The consequences of House Bill 1004 will be to foster ill will in districts and buildings.”


Teachers unions have been a regular target for Republican lawmakers in recent years. Other bills introduced in the last two years would allow all teachers to individually negotiate their contracts

Before 2010 Superintendents were anxious for the legislature to weaken ISTA. In 2011, they did. Republican legislators have been happy to go along because first, Republicans hate unions, and second, because Republicans have had trouble supporting public education and the ISTA has rarely (though not never) supported them. Even now, when you look at who is getting the benefits from the governor's office and the legislature, it's private schools (through bills geared towards increasing the state's already expansive voucher plan) and privately owned charter schools – because privatization donors are buying the Republican party in Indiana just like they are elsewhere. Public schools, while they enroll the vast majority of students in the state, are the last ones the legislature wants to help. Public schools don't bring in the campaign donations.

In other words, this bill has nothing to do with keeping teachers in the classroom or encouraging more young people to enter the teaching profession. It has nothing to do with improving instruction or helping struggling students. This bill, like so many others from Indiana's supermajority Republican legislature, is politically motivated. It's plain, old-fashioned, union busting. 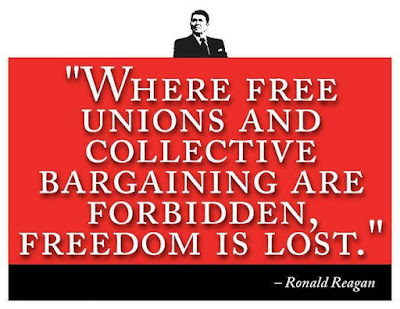