"Baseball has done more to move America in the right direction than all the professional patriots with their billions of cheap words." -- Monte Irvin, quoted by MLB historian, John Thorn 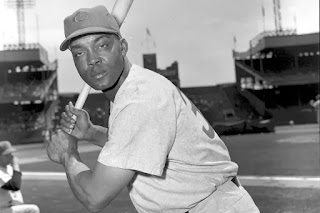 Irvin played in the Negro Leagues and the Mexican League before coming to the Major Leagues in 1949. He played alongside, and mentored Willie Mays, and was part of the New York Giant's 1951 World Series Championship team.

From the Giant's web site tribute to Irvin:


Monte Irvin was a mentor to Willie Mays and a friend to Ted Williams. He was in the Polo Grounds' home dugout when Bobby Thomson hit the "Shot Heard 'Round the World" and was visiting Havana when the Cubans ran out a hotshot pitching prospect named Fidel Castro.

Irvin's long, wonderful life was the stuff of dreams, a uniquely American story and an enduring testament to talent, perseverance, grace and dignity. Perhaps it is the greatest tribute to this remarkable man, who died Monday night in Houston of natural causes at age 96, that he'll forever be remembered as much for his decency and sense of humor as for his amazing skills.

Monte Irvin played his last year in professional baseball (as a player) with the Chicago Cubs. It was 1956 – my first year as a (8 year old) Cub fan.

Al Yellon, author of the Bleed Cubbie Blue blog, wrote of a milestone game in which Irvin particpated,


His one year with the Cubs was decent, as he hit .271/.346/.460 with 15 home runs in 111 games at age 37. Irvin's addition to the team in 1956 meant that in the first game Sam Jones started that year, April 20 against the Cardinals, the Cubs fielded a majority African-American lineup for the first time (Irvin, Jones, Ernie Banks, Gene Baker and Solly Drake). They were the second team to do so. (First was the Dodgers, July 17, 1954.)