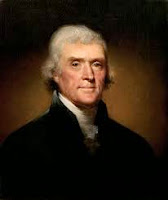 The Religious Right has worked hard in the last few decades to redefine the term, "Religious Freedom." In the U.S. today we have governors, politicians, and public officials supporting attempts to discriminate based on religious beliefs. We have candidates for public office promising to limit the immigration of certain religious groups. We have religious organizations which seek to limit the rights of their employees. In other words, the attempt has been made to define Religious Freedom in such a way as to coerce and manipulate the rights of others.

Rob Boston, Director of Communications for Americans United for Separation of Church and State, has written,

...Somehow the actions of others are seen as a threat to someone else's religious liberty.

Thus, an employee's decision to use birth control becomes a threat to her boss's religious freedom. An expectation that young children will learn about evolution in a public school endangers the religious freedom of an evolution-denying family in that district. A woman who shows up at a pharmacy and expects the pharmacist to do his job by giving her the medication her doctor has prescribed is threatening the pharmacist's religious freedom. A same-sex couple's decision to get legally married somehow threatens the religious liberty of a person across town who doesn't even know them.

...Unless the actions in question involve busting down church doors, thrashing the implements of worship, and threatening the people inside, very little of what one person does affects the religious liberty of another.

Religious freedom does not mean that you can prevent me from doing something that offends your religious beliefs if my action doesn't harm you. Believe what you choose...and let me believe what I choose.

TWENTY GODS OR NO GOD

In his own words he reminds us that the first amendment protects all citizens' religious expression no matter who they are, or what their religion might be. The only restriction is that which is "injurious to others."


The legitimate powers of government extend to such acts only as are injurious to others. But it does me no injury for my neighbour to say there are twenty gods, or no god. It neither picks my pocket nor breaks my leg.


When the Virginia Statute for Religious Freedom was adopted on January 16, 1786, it formed a blueprint for what would become the basis for the protection of religious liberty enshrined in our Constitution. Drafted by Thomas Jefferson, the statute proclaims that "all men shall be free to profess, and by argument to maintain, their opinions in matters of religion, and that the same shall in no wise diminish, enlarge, or affect their civil capacities." The First Amendment prohibits Government from establishing religion, and it protects the free exercise of every faith. Our Government does not sponsor a religion, nor does it pressure anyone to practice a particular faith, or any faith at all. The United States stands for the protection of equal rights for all people to practice their faith freely, without fear or coercion, and as Americans, we understand that when people of all religions are accepted and are full and equal members of our society, we are all stronger and freer.