Vouchers Come Up Short
VOUCHERS IN THE NEWS

The latest research on the efficacy of school vouchers shows that receiving a voucher does not guarantee a better education. One wonders, then, why Republicans (and some Democrats) are fighting so hard to impose more vouchers on the public to the detriment of public schools?

The current administration, under Trump, Pence, and DeVos, is pushing vouchers nationwide despite the mediocre showing of private schools compared to their public counterparts (see The Public School Advantage as well as here, here, here, and here). This is not to say that private and parochial schools are all inferior to public schools. On the contrary, some elite private schools have excellent programs unburdened by teach-to-the-test policies. However, when you consider the economic status of the students the advantage disappears.

In Indiana, vouchers began as a way to help high poverty students "escape" from "failing" public schools. The truth is that the "failing" public schools were often struggling due to the state's neglect of the economic conditions in the school communities. Children in East Chicago, for example, have been combatting the effects of lead poisoning for years. "Failing" schools in Indianapolis are due, at least in part, to a child poverty rate of 33% and an overall poverty rate of 20%, both well above the national average. Vouchers wouldn't help all those students even if private and parochial schools were "better." Public schools can and should try to improve, of course, but improvement requires support from the larger community, in this case, the state legislature and governor's office. Until politicians accept their share of responsibility for the high rate of child poverty, schools – public, charter and private – will continue to "fail."

The Indiana voucher plan began in 2011 with the promise of saved money and increased achievement. Under the Republican-led legislature and Governors (Daniels and Pence), the program has been expanded significantly. Once it became clear that private and parochial schools can't overcome the effects of poverty any better or more cheaply than public schools can, the argument has changed from "improved achievement and money saved" to "parental choice." Should parents have the "choice" to spend public tax dollars, earmarked for a public institution, at a religious or private location? 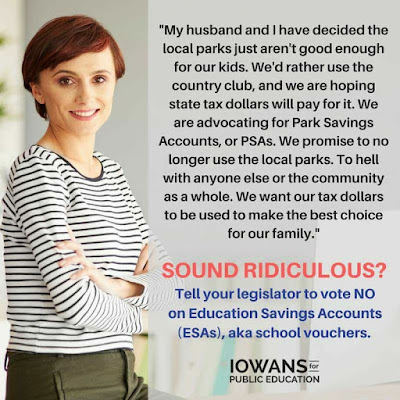 Vouchers do not improve education


In Indiana, the motivating impulse for voucher enthusiasts seems to be a combination of: a) undermining the influence of teachers’ unions; b) subsidizing the preferences of those who would want a private religious education; and c) providing access to that sweet, sweet education money to friends and well-wishers of voucher proponents.

Education Secretary Betsy DeVos is getting some very bad news about her favorite thing, school vouchers


...DeVos's patron, President Trump, proposed during his campaign to shovel $20 billion to the states to support magnet and charter schools in voucher programs.

Hilzik continues, reporting the news that recent research has voucher students scoring lower on standardized tests than public school students. The claim that "education experts" are stunned by the results is, in itself, stunning. Simply changing the venue of a child's education isn't sufficient to improve achievement if the child continues to live with the out-of-school-factors related to poverty.


...the latest findings, which emerge from studies of statewide programs in Louisiana, Ohio and Indiana, have left education experts stunned. In a nutshell, they find huge declines of academic achievement among students in voucher programs in those three states.

Kevin Carey in the New York Times, echoes the "surprise" over the results of the studies. The results, he says, are "startling."

In this piece, "well-regulated charter schools" refers to charters which are "open to all and accountable to public authorities."

The last sentence is the most important. [emphasis added]


The new voucher studies stand in marked contrast to research findings that well-regulated charter schools in Massachusetts and elsewhere have a strong, positive impact on test scores. But while vouchers and charters are often grouped under the umbrella of “school choice,” the best charters tend to be nonprofit public schools, open to all and accountable to public authorities. The less “private” that school choice programs are, the better they seem to work.

I voted for school vouchers. Now I know I was wrong.

The pro-"reform" Thomas Fordham Institute studied the effectiveness of Ohio's voucher programs. Just like in Louisiana and Indiana, they don't help children achieve better than public schools and they strip public education of funding.

In this article a former North Carolina legislator concludes that tax money for vouchers would be better spent on the state's public schools.


So what did this report say that the Fordham Institute undertook, ostensibly to promote the expansion of vouchers in America? It said that vouchers have failed miserably. That’s right, a pro-voucher group had to put out a report that concluded that vouchers are failing our children. And keep in mind, this isn’t an outlier of empirical studies of vouchers’ effectiveness in educating our children. Two other recent studies (one in Indiana and another in Louisiana) came to the same conclusion.

...North Carolina is scheduled to spend over $1 billion in the next 10 years for a voucher system that simply doesn’t work. It’s time for the General Assembly to recognize this and correct course so that we can reinvest that billion dollars in public schools. 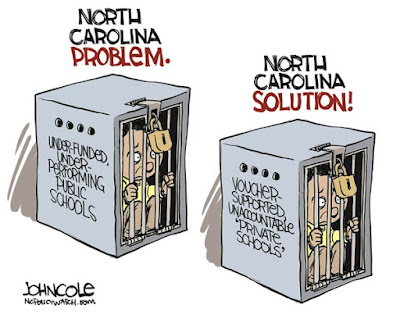 At first it was for poor kids to escape from "failing" schools. Now it's a way to provide public funds for religious schools and to increase the segregation of Indiana schools. [emphasis added]


When lawmakers created the program in 2011, then-Gov. Mitch Daniels said it was a way to help children from poor families find a better alternative to failing public schools. But the program has evolved into a new entitlement: state-funded religious education for middle and low-income families.

Some 54 percent of students receiving vouchers this year have no record of having attended an Indiana public school, the report says. Voucher advocates initially insisted the program would save the state money, because it would cost less to subsidize private school tuition than to send a student to a public school. But increasingly vouchers are going to families that never had any intention of sending their kids to public schools; that’s an entirely new cost for the state to take on.

Also, vouchers are more and more going to students who are white, suburban and non-poor. When the program started, more than half of participating students were black or Hispanic. Now over 60 percent are white, and only 12.4 percent are African-American. It’s reasonable to ask if, in some cases, vouchers are a state-funded mechanism for “white flight” from schools that are becoming more diverse.


John Kuhn is a Texas school superintendent and long-time advocate for public schooling. His essays have been read hundreds of thousands of times online, videos of his speeches have gone viral, and his book, Fear and Learning in America, has sold thousands of copies. He continues to advocate for teachers and fight for the constitutional promise of free public schools for all American children.

I've quoted Superintendent Kuhn quite a few times on this blog and included YouTube videos. He's an important voice for public education in America...not just Texas.

Superintendent Kuhn presented this speech on March 5 to the Association of Texas Professional Educators, an independent association of educators (i.e. affiliated with neither NEA nor AFT).


The great American experiment of free public schools, open to all children and overseen by locally-elected citizens—this bold vision is being challenged by an army of wealthy and interested parties who are dead set on dismantling the public education system and trading it for a voucher system...

John Kuhn at the Save Texas Schools Rally in 2011
Be sure to read John Kuhn's Alamo Letter.