Listen to This #15: From John Kuhn

John Kuhn is the superintendent of Mineral Wells ISD near Dallas/Fort Worth, Texas. He is an outspoken supporter of public schools and an advocate for equity in funding.

I've been following him on this blog since his speech at the 2011 Save Our Schools Rally, and have quoted him frequently.


Everyone just kind of assumes that the people telling teachers how to teach actually know something about teaching that the teachers don't know.


I ask you, where is the label for the lawmaker whose policies fail to clean up the poorest neighborhoods? Why do we not demand that our leaders make “Adequate Yearly Progress”?

John Kuhn at the Save Our Schools Rally in Washington D.C., July 2011
A TEAM EFFORT


If the teacher is the quarterback, Congress is the offensive line. Their performance impacts our performance, but they keep letting us get sacked by poverty, broken homes, student mobility, hunger, health care. And they just say "Oops" as that linebacker blows by them and buries his facemask in our chest. Then we get back to the huddle and they say, "You gotta complete your passes." We're aware of that. Make your blocks, legislators. Give us time to stand in the pocket and throw good passes. Do your job. It doesn't take a great quarterback rating to win games; it takes a team effort.


I will never follow the lead of those who exclude the kids who need education the most so that my precious scores will rise.

WHAT THE BEST AND WISEST PARENT WANTS FOR HIS OWN CHILD...

From Fear and Learning in America (Teachers College Press, 2014)


Politically powerful parents in America won't accept inadequate public schooling for their children – they have minimum expectations that just happen to align nicely with Bloom's taxonomy and John Dewey's quote about what the best and wisest parents want for their children; and they have the voices and the votes to realize at least an approximation of those expectations. Suburban public school parents want for their children precisely what author Jonathan Kozol has vividly described as the components of the wonderful education poor children deserve (and need, if they are to enter into the full promise of this nation). These parents want their children's schools to have well-appointed libraries, reasonable class sizes, ample time for exploration and play, comfortable climate-controlled buildings, safe surroundings, and green grass.

The only difference is that poor people have little more to cling to than Jonathan Kozol's eloquence; suburbanites have political heft and can actually make sure their children get something approaching their loving standard of educational quality. 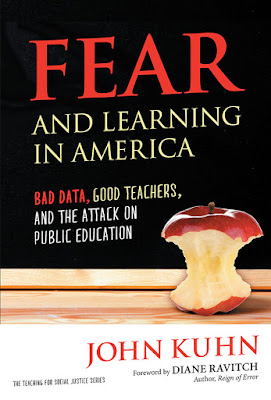 A BLIND EYE TO EQUITY


The school reform movement that today fixates on outcomes and turns a blind eye to equity was born out of this intractable conflict between twin titans of political heft: business executives and politically engaged upper middle–class parents. Inequity ws the obvious and time–honored solution to align these two camps. The legislature could keep both influential constituencies happy by building and maintaining a system just like the one it had constructed, a system of selective adequacy wherein upper– and middle–class neighborhoods boasted great public schools, and poor neighborhoods got “efficient” ones. If you had to shortchange education, it was good politics to shortchange it in minority neighborhoods.