School choice fails, Students give up rights,
Tax dollars for discrimination,
Choice and segregation,
Pilot "choice" programs are a trap

"...to compel a man to furnish contributions of money for the propagation of opinions which he disbelieves and abhors, is sinful and tyrannical..." -- Thomas Jefferson, Virginia Statute for Religious Freedom.

Indiana's voucher program began as a plan for low-income students to "escape" their "failing schools" and go to the private schools that wealthier people have always been able to afford. In order to qualify, then-governor Mitch Daniels insisted, a student must have spent at least one year at a public school.

The purpose of Indiana's vouchers has changed. Supporters in Indiana no longer talk about helping poor kids get a better education. Instead, taking DeVos talking points, it's all about "choice." Parents will choose the best school for their children.

Finally, Indiana schools that accept vouchers don't have to be accountable for the tax money they are given. At an education forum last month, my local state senator said that this was intended. They don't have to be accountable. They get the money with no strings attached. Perhaps they'll use the money they get for their school to fix the church steeple...or pay for the new football field. It doesn't matter. The taxpayers shouldn't care about accountability for tax dollars paid to religious institutions.


James Madison’s “Memorial and Remonstrance Against Religious Assessments” was written in 1785 in opposition to a proposal by Patrick Henry that all Virginians be taxed to support “teachers of the Christian religion.”

To this day, the “Memorial and Remonstrance” remains one of the most powerful arguments against government-supported religion ever penned.

Meanwhile, the Indiana Constitution (Article 1, Section 6), which seems to agree with Presidents Jefferson and Madison, states,


No money shall be drawn from the treasury, for the benefit of any religious or theological institution.

The current administration, supported by Mike Pence as VP and Betsy DeVos as Secretary of Education, hates public education. In the State of the Union Address on February 4, 2020, the President sneered about "failing government schools." DeVos, who purchased her job with political contributions, has called public education "a dead end." Neither the President, the Secretary, nor any of their children, ever attended a public school.

Despite the lack of evidence, the administration chooses privatization over public education.


Ultimately, the school choice debate is a distraction from a sobering fact: the U.S. has failed public education by never completely committing to high-quality education for every child in the country regardless of their ZIP code.

There is no mystery to what constitutes a great school, high academic quality, or challenging education, but there is solid proof that almost no one in the U.S. has the political will to choose to guarantee that for every child so that no one has to hope an Invisible Hand might offer a few crumbs here and there. 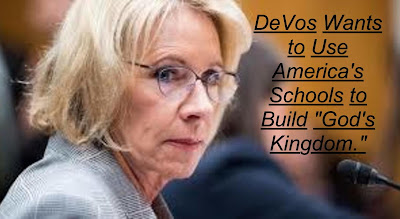 STUDENTS GIVE UP THEIR RIGHTS WHEN THEY LEAVE THE PUBLIC SCHOOLS


When students participate in a voucher program, the rights that they have in public school do not automatically transfer with them to their private school. Private schools may expel or deny admission to certain students without repercussion and with limited recourse for the aggrieved student. In light of Secretary DeVos’ push to create a federal voucher program, it is crucial that parents and policymakers alike understand the ways that private schools can discriminate against students, even while accepting public funding. Parents want the best education possible for their children, and voucher programs may seem like a path to a better education for children whose families have limited options. However, parents deserve clear and complete information about the risks of using voucher programs, including the loss of procedural safeguards available to students in public schools.

SHOULD TAX DOLLARS BE USED TO DISCRIMINATE?

Suzanne Eckes, professor of Educational Leadership and Policy Studies at Indiana University asks, “Hey citizens of the state of Florida ... Do you want your taxpayer money used in this way?”


All of the schools the Sentinel found with anti-gay policies were Christian, with the largest group — about 45 percent — Baptist, not surprising given that the Southern Baptist Convention says Christians must “oppose” homosexuality.

Nearly 40 percent of the schools were non-denominational and a smattering were affiliated with Assemblies of God, Catholic, Lutheran, Nazarene, Pentecostal and Presbyterian Church in America denominations, among others.

There could be more campuses with discriminatory policies, as some private schools that take the scholarships do not publicly post their rules, and a small number don’t have websites.

The schools with these anti-gay rules are found across Central Florida, in suburban DeLand (Stetson Baptist Christian School), near downtown Orlando (Victory Christian Academy) and in historic Mount Dora (Mount Dora Christian Academy). They are in Florida’s rural communities from Okeechobee to the Panhandle and its cities from Miami to St. Petersburg to Tallahassee.

The schools see the proposed legislation as an unconstitutional attack on their religious rights, and many likely wouldn’t change their policies, even if the scholarship law gets amended. 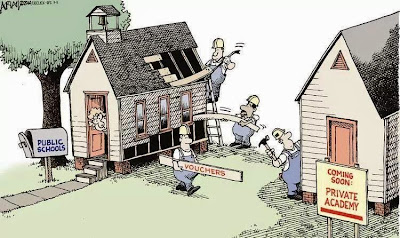 Columnist Sheila Kennedy points out the necessity of public schools.


As the country’s diversity and tribalism have grown, America’s public schools have become more necessary than ever. The public school is one of the last “street corners” where children of different backgrounds and beliefs come together to learn–ideally–not just “reading, writing and arithmetic” but the history and philosophy of the country they share.

DESPITE BROWN v. BOARD, SEGREGATION CONTINUES UNDER "CHOICE"

Another not-so-hidden "feature" of school "choice" is economic and racial segregation.


...(families) are making judgments about school quality ... but they're basing those judgments often on poor data, on average test scores at a school, which is not a good indicator of school quality. And sometimes all kinds of biases can get in the way too. It looks like, from other research, that white advantaged parents often make decisions based on the number of other white advantaged parents at a school, not based on any real research about school safety or school quality or these kinds of important indicators. 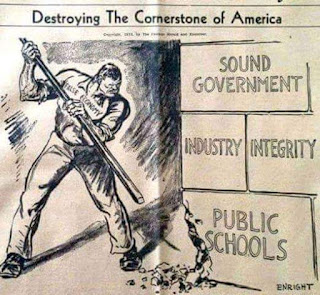 Don’t Be Fooled! Voucher ‘Pilot’ Programs Are A Trap

Legislators use "pilot" programs as ways of getting their pet projects started. Once a program is funded -- even as a "pilot" -- funding is easier to continue. Changes to the "pilot" program can come later, as in the all-inclusive changes to the Indiana voucher plan. It might begin as a restrictive plan, for certain students "in need." Given the nature of political donations, however, it will undoubtedly expand...just as Indiana's plan has expanded.


Last week a South Carolina Senate Education Subcommittee debated SB 556, which would create a new private school voucher program. Before the hearing, Americans United sent a letter to the committee telling its members to reject the bill because vouchers have been shown to harm students’ academic achievement, fail students with disabilities and violate religious freedom.

Sensing that a statewide voucher would be unpopular, some senators offered to make the program a temporary “pilot” or to limit its eligibility to a “narrow” population of students. Hopefully, South Carolina’s legislators won’t buy this false compromise.