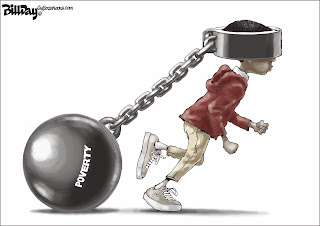 WHAT'S 'BROKEN'? THE PUBLIC SCHOOLS OR AMERICA ITSELF?

Margaret Fortune of the Freedom Coalition for Charter Schools calls out the President for lying about former Vice President Biden's plan for charter schools. The comment by the current occupant of the White House that Biden wants to close all charter schools has been debunked over and over again, though this will hardly stop him lying about it...nor will it stop his base from believing him.

In any case, Fortune continues by making a misstatement of her own when she talks about public schools in Black neighborhoods being "broken."

No. It's because...
Children of color in the US have been denied equal opportunities compared to their white counterparts for more than 400 years. Diverting much-needed funding from the public schools for their inability to solve the centuries-old problem of racism isn't going to make the issue go away.


Before an audience of nearly 24 million viewers, Trump said during his Republican National Convention speech that Biden has vowed to “close all charter schools, ripping away the ladder of opportunity for Black and Hispanic children.”

The president's claim is not true, and Trump has not been a reliable charter school ally himself. But Biden isn’t making a big show of countering that accusation or bearhugging the charter community either, after support for the schools took a beating during the Democratic presidential primary. Boxed in by that progressive tide, the former vice president may be creating an opening for Trump to woo parents of color — and on an issue considered part of President Barack Obama’s legacy.

“I could never believe a Donald Trump on the television, trying to exploit the desperation of Black families who need a better option for their kids because the public schools in their neighborhoods are broken,” said Margaret Fortune, co-chair of Freedom Coalition for Charter Schools. “But it also moves me to deep concern that Joe Biden would hand him that narrative, by being silent on the issue.”

While public schools are threatened with cuts, private schools (mostly parochial) and charter schools get more than five times the funding from the CARES Act.


Our review revealed that approximately 1,200 charter schools and 5,400 private schools received an estimated $1.3 billion and $4.5 billion in PPP loans, respectively—averaging $855,000 per school. In contrast, other parts of the CARES Act allocate only $13.2 billion for all of the 98,158 public schools in the country, or $134,500 per school. In other words, private and charter schools are getting six times more per facility than public schools.

This gap will likely widen, as charter and private schools are also entitled to a portion of federal funding for public education. Additional analysis will be needed to determine the exact size of this gap, but there is clearly a significant disparity in CARES Act funding for different kinds of schools.

Ed Tech Cashes In on the Pandemic

When the pandemic hit, the vultures moved in. If you've never read The Shock Doctrine, now is the time.

From The American Prospect


Ed tech companies lost no time moving in. “When the pandemic hit, right away we got a list of all these technology companies that make education software that were offering free access to their products for the duration of the coronavirus crisis,” said Gordon Lafer, political economist at the University of Oregon and a member of his local school board. “They pitch these offerings as stepping up to help out the country in a moment of crisis. But it’s also like coke dealers handing out free samples.” ...

For the past two decades, ed tech has been pushing into public schools, convincing districts to invest in tablets, software, online programs, assessment tools. Many superintendents have allowed these incursions, directing funding to technology that might have been better spent on human resources, teachers, counselors, nurses, librarians (up to $5.6 billion of school technology purchased sits unused, according to a 2019 analysis in EdWeek Market Brief). Now the pandemic has provided ed tech a “golden opportunity,” a “tailwind” (these are the terms we hear): Michael Moe, head of the venture capitalist group Global Silicon Valley, says: “We see the education industry today as the health care industry of 30 years ago.” Not a happy thought. 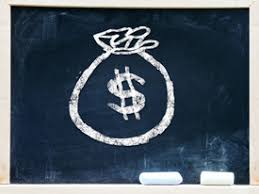 The US is a post-truth society. We no longer have facts common to us all. We only have the facts of our own little bubble of news and information. Republicans have one set of facts. Democrats have another. Even the health of the nation suffers from partisan bickering.

CHILDREN AND THEIR TEACHERS ARE THE PAWNS IN POLITICAL GAMES

America's schoolchildren and their teachers are the pawns in the political games of adults.


In the next week or so, school districts all over the country will reopen their buildings as their new year begins. During our pre-service training, a teacher colleague of mine described the process as a “grand experiment.”

But he’s wrong; it’s not an experiment. It’s a gamble.

An experiment, by definition, is a controlled, scientific procedure designed to gain knowledge. When a researcher conducts an experiment, they try, as much as possible, to control for outside factors that may affect an outcome. The goal is to see relationships between causes and effects, and better understand how the world works.

A gamble, on the other hand, is a risky action taken with the hopes of getting a favorable result. A gambler isn’t trying to learn anything – all they want is a win.

EDUCATIONAL DECISIONS: NO NEED FOR EDUCATORS

“Teachers Can Turn This Thing Around” – Not Billionaires, Private Interests, Or ALEC-Aligned Stooges

Educational decisions are being made without the input of educators. Does this surprise you? It shouldn't. It's been going on for years.

But with the end of the traditional school year coming and the need to start talking about how we will proceed with fall, it is apparent that the input of teachers is paramount.

Why? Because “Teachers Can Turn This Thing Around.”

And don’t forget to vote this November. 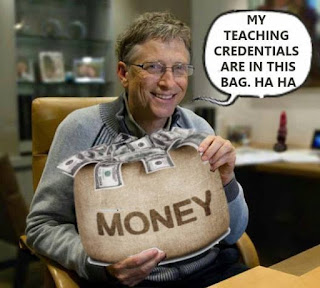