The current occupant of the White House claims that American schools are teaching "a twisted web of lies" about systemic racism in America. He says that parents are going to demand that their children are no longer "fed hateful lies about this country."

Which lies does he mean...this one, perhaps?


"We hold these truths to be self-evident, that all men are created equal, that they are endowed by their Creator with certain unalienable Rights, that among these are Life, Liberty and the pursuit of Happiness." 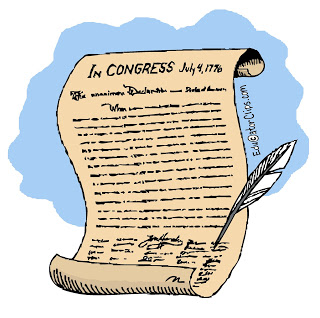 The United States is a nation founded on both an ideal and a lie. Our Declaration of Independence, approved on July 4, 1776, proclaims that “all men are created equal” and “endowed by their Creator with certain unalienable rights.” But the white men who drafted those words did not believe them to be true for the hundreds of thousands of black people in their midst. “Life, Liberty and the pursuit of Happiness” did not apply to fully one-ﬁfth of the country. Yet despite being violently denied the freedom and justice promised to all, black Americans believed fervently in the American creed. Through centuries of black resistance and protest, we have helped the country live up to its founding ideals. And not only for ourselves — black rights struggles paved the way for every other rights struggle, including women’s and gay rights, immigrant and disability rights.

Among those who signed the Declaration of Independence, nearly three-fourths were slave owners, thus negating the sincerity of the words, "unalienable Rights," and "...Life, Liberty, and the pursuit of Happiness."

In 1830, President Jackson signed the Indiana Removal Act into law, which required the US government to negotiate for Indian land in the Southeast. Instead, Jackson ignored the letter of the law and drove the native people from their land, "relocating" them to Oklahoma. Was that "...Life, Liberty, and the pursuit of Happiness?"

After the Civil War, Jim Crow laws were established to keep Black Americans from voting, buying homes, and getting jobs. Was that "...Life, Liberty, and the pursuit of Happiness?"

Is it patriotic to pretend that these and other examples of denying Americans their rights because of the color of their skin, their religious beliefs, or their ancestry, didn't happen? Or is it more patriotic to acknowledge the failings associated with our founding and development as a nation along with the powerful stories of those citizens who fought to make the words, "...Life, Liberty and the pursuit of Happiness" a reality?

How can we teach children about Harriet Tubman and Frederick Douglass without teaching them about slavery?

How can we teach children about World War II Japanese-American internment camps, Martin Luther King Jr., and John Lewis without teaching them about white supremacy and the KKK?

Do we just ignore slavery, Jim Crow, and internment camps?

Instead, real patriotism echoes the words of Carl Shurz, Civil War General and Senator from Missouri, who said,


"My country, right or wrong; if right, to be kept right; and if wrong, to be set right."

Our obligation to the next generation is to teach them the truth about America and help them to "keep right" what is right and to "set right" what is wrong.

Our children deserve the truth


"It has always seemed to me that teaching the truth about America is the most American act we can commit. A great deal of our history is wonderful: freedom of religion, land of opportunity, great democracy, economic success. A great deal of our history is horrible: genocide of Native Americans, slavery, Jim Crow, imperialism, economic inequity. In that, we are like every other civilization in history. Have we gotten more things right than many other civilizations? Perhaps. But that does not absolve us from those things we have gotten wrong." -- Russ Walsh