We Must All Be Civics Teachers - Constitution Day, 2020

Reposted and updated from 2018.

A few days ago, the Annenberg Public Policy Center released its annual Constitution Day Civics Survey. The results of the survey suggest that the recent upheavals in the United States...racial protests, a pandemic-based health crisis, and increased political polarization...have provided Americans with the excuse to learn more about our form of government.

The survey found that Americans now know more about how our government works than in the last couple of years.

Asked to name any of the rights guaranteed under the First Amendment of the U.S. Constitution: 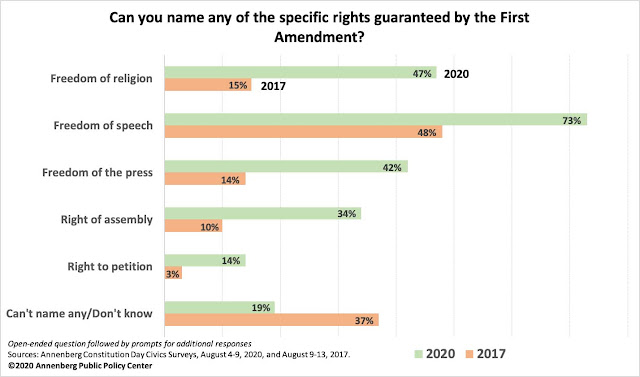 It seems obvious that daily newscasts and political pronouncements have helped to educate Americans on the freedoms guaranteed in the First Amendment. The survey did not, however, explore the depth of understanding about the newfound knowledge or delve into such questions as...

It's only slightly comforting that more Americans have learned about the freedoms guaranteed in the First Amendment. On the other hand, it is disturbing (at least to me) that only about half of Americans surveyed can name all three branches of the government. That's up from about one-third a year ago, but given how important the system of checks and balances is to securing our democracy, it's not enough. It's also disturbing that nearly a quarter of our citizens can't name even one branch of the government!
Furthermore, the survey indicates that a even among those who know the three branches of government, there are a large number of people who are ignorant of the way the branches interact.

For example, almost a third of those surveyed (29%) thought that Congress decided whether the President's acts were constitutional. Half of the respondents knew that's the job of the Supreme Court, but that number (51%) is down from 2019. In addition, less than half of those surveyed knew how large a majority in Congress it took to override a Presidential Veto.


It's clear that many of our citizens still don't know enough. 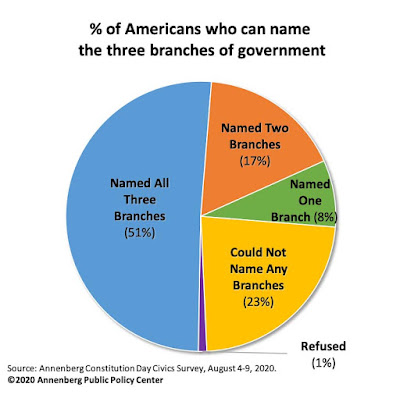 WE ARE ALL CIVICS TEACHERS

On September 17, 1787, 233 years ago today, delegates to the Constitutional Convention in Philadelphia, signed the Constitution of the United States. It was ratified nine months later and went into effect 18 months after that.

We all still need to be civics teachers!

Email ThisBlogThis!Share to TwitterShare to FacebookShare to Pinterest
Labels: Constitution