At School: Teachers as First Responders

I had decided that I was done posting stories about the school shooting at Sandy Hook Elementary in Newtown, Connecticut...but as people process the events there are many thoughts which I believe are valuable to read.

It's unfortunate that this only seems to happen when there's a tragedy or disaster of some sort...mass killings like the ones in Newtown or Aurora...disasters like Katrina...or acts of war like the attacks on 9/11. The intensity of the experience gives people the unwelcomed opportunity to put themselves in another's shoes -- to empathize with others. We know that it can happen anywhere. We are fragile, emotional beings and some of our co-inhabitants on this planet, and sometimes the planet itself, remind us of that all too often.

For whatever reason, humans have always had trouble not killing each other. Has there ever been a time when someone somewhere wasn't at war with someone else? On the other side of that coin are the "helpers" as Fred Rogers called them.


When I was a boy and I would see scary things in the news, my mother would say to me, "Look for the helpers. You will always find people who are helping." To this day, especially in times of "disaster," I remember my mother's words and I am always comforted by realizing that there are still so many helpers – so many caring people in this world.

There are always helpers who spend their days and often risk their own lives for the sake of others.

Some "helpers" deal with the physical...like nurses, EMTs and doctors. Others deal with the societal...like firefighters, police officers and soldiers. Still others attend to the emotional like therapists, more nurses, and more doctors.

Often "helpers" in one area have to cross over to another. Teachers do that on a daily basis. While focusing on academic growth, teachers have to help students in emotional distress...and sometimes, they have to help them deal with life-threatening situations like the teachers at Sandy Hook did.

The first first responders: Teachers stand on the front lines every day

Those of us who have been calling out the misuse and overuse of tests and the wrong direction the so-called "reformers" are taking public education, have been saying for years that there's more to being an educator than getting kids to pass a test. We were reminded of that in stark, horrible, and terrifying terms last Friday.

Teachers perform acts of heroism daily while being insulted, dismissed and ignored by politicians, pundits and policy makers.


We need to remind ourselves why teachers do what they do, how they care for our children, how they are co-guarantors, along with parents, of our future. Far beyond instruction, fidelity to curriculum, Common Core State Standards and the like are the daily challenges of teaching children who come to school with a limitless supply of problems and struggles.

It is true that we teach because we want children to learn, grow and succeed in this tough world. But there is so much more that we do.

We try to keep sleep-deprived students alert enough to keep their heads off their desks.

We hug and hold students who have experienced a death in the family, a drug overdose, the incarceration of a parent or sibling, a shooting in the neighborhood, physical or sexual abuse, the emotional trauma of their parents' separations and divorces, abandonment.

We comfort students who are pregnant or seriously ill.

We purchase and distribute clothes (including socks and underwear), books, food, even beds, so that our students will have one less worry to distract them from learning.

We hand out stickers, trinkets, candies and treats.

We break up fights, mediate conflicts and mentor curious and creative children.

Frequently, we are the first to recognize signs of mental illness.

Every day at school, we are the first first responders. 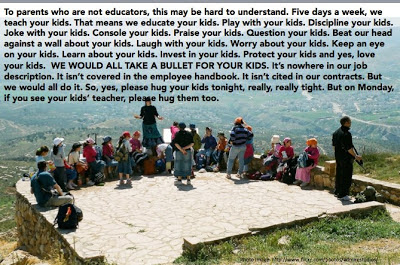 I've said this before...Children are not a high priority in our nation. Our priorities are money, money, and money. We've mortgaged their future, damaged the environment they're going to have to live with, and now, those who are jockeying for power are using them as a pawn in a quest for control of the money spent on public education.

We have the highest child poverty rate among advanced nations in the world and we're taking away their already meager safety nets. We're squandering our greatest resource -- our children.


America’s children seem to be shortchanged on almost every issue we face as a society.

Not only are we failing to protect our children from deranged people wielding semi-automatic guns.

We’re not protecting them from poverty. The rate of child poverty keeps rising – even faster than the rate of adult poverty.

And we’re not protecting their health. Rates of child diabetes and asthma continue to climb.

Yes, Ms. Roig, it's ok to tell your students that you love them.


"She only spoke, she said, because she wants us to know this is a school of teachers who care so much about each other and their students..." -- Diane Sawyer

This story really touched me...see the last sentence below.


Rosen said Sandy Hook had always been a place of joy for him. He taught his 8-year-old grandson to ride his bike in the school parking lot and took his 4-year-old granddaughter to use the swings.

"I thought today how life has changed, how that ground has been marred, how that school has been desecrated," he said.

He said it wasn't his training as a psychologist that helped him that day – it was being a grandparent.


Educators across the nation mourn the violent loss of life at Sandy Hook Elementary in Newtown, Connecticut. Together we reflect, pick up the pieces and console our students. We honor the teachers and staff who risked their lives, gave their lives and saved lives. 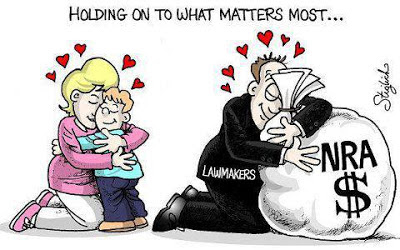 
Perhaps part of their legacy will be a societal re-examination of the significance of educators and a better appreciation for our sense of duty to our students and our profession. Across the country, our educators commit countless deeds of kindness and altruism for the good of their students, colleagues, schools and communities. They expect nothing in return but to know that they have made a difference.

In other countries, the respect afforded the teaching profession bolsters their societies and helps to sustain it in so many ways. We should find ways to emulate these values and perceptions. We can honor the memories of the deceased by honoring the teachers who perform their noble duties daily. We can collectively elevate the status of education in our society and better support our teachers, students and schools.

...To so many, the educators at Sandy Hook Elementary School demonstrate that the core values of education mirror the greatest ideals of humanity, and they are exemplars in this regard. They offer us hope, and reinforce our belief in the goodness of others and the power of education. In an era of accountability, standards, testing and data, they affirm that what ultimately matters most are the immeasurable lessons and the enduring relationships teachers cultivate with their students.

To the educators of Sandy Hook Elementary School, thank you for the powerful, inspiring example of dedication and compassion you have given us. You have made, and continue to make, a difference to so many. In the midst of this unfathomable loss and profound sorrow, you have buoyed our spirits and given us hope. Because of your passion, courage, sacrifice, and devotion, I am once again reassured to proudly declare to educators everywhere: Never again say, "I am just a teacher."