Here is a politician who sees teachers as the enemy, bent on damaging him politically by rejecting his choice for school chief. When Tony Bennett lost the election for Indiana's Superintendent of Public Instruction, the current governor, Mitch Daniels, along with some of his colleagues in the legislature, began a program of denial. They claimed that Bennett's loss was just because teachers didn't like him...not because of his policies. The policies, they said, were enshrined into law and voters didn't reject the people who had made those laws. That much, at least was true. The voters of Indiana, while rejecting Bennett, did reelect the conservative legislators who put into law the policies removing teacher rights, increasing charter schools and granting vouchers for use at religious and private schools. More on that later...

For his part, Bennett has been mostly quiet. Immediately after the election he pointed a finger at the Indiana State Teachers Association, claiming that he knew they would fight him, but has since left the election behind...hoping, apparently, to move to Florida to continue his battle against public schools and public school teachers. The governor, on the other hand, hasn't quit. It obviously just irks him that his chosen one for the office of state superintendent was soundly beaten (52% to 48%) by a [gasp!] public school teacher.


Republican frustration over the election defeat of Superintendent of Public Instruction Tony Bennett boiled over into the public this week with Gov. Mitch Daniels claiming at an education reform conference here that teachers used illegal and improper methods to oust Bennett.

"If you're a fan of anything-goes politics, it was a creative use of illegal -- but still creative use -- of public resources," Daniels said Wednesday at a Washington, D.C., meeting of the Foundation for Excellence in Education, a group led by former Florida Gov. Jeb Bush. "We got emails sent out on school time by people who were supposed to be teaching someone at the time, all about Tony Bennett. We have parents who went to back to school night to find out how little Jebbie is doing and instead they got a diatribe about the upcoming election."

A "diatribe"? Daniels' contempt for public school teachers is clear.

Did all the public school teachers in Indiana contact all their relatives and friends and somehow coerce them into voting against Bennett?

Did all public school teachers in Indiana somehow coerce the parents of their students to vote against Bennett?

Isn't it possible that voters are concerned about the direction public education policy in Indiana -- and the nation -- is heading and that's why Bennett was defeated?

Daniels neglected to mention that Glenda Ritz, the Superintendent-Elect received the votes of 1.3 million citizens yet there are only about 58,000 public school teachers in Indiana. Do all Indiana residents automatically do just what their teacher-friends and -relatives tell them to do? No, I don't think so. Even if all the teachers in the state voted for Glenda Ritz -- and got all their families and friends to vote for her that still wouldn't account for 1.3 million votes.

What's more likely is that Ritz received all those votes because

Finally, the election of conservative legislators in a conservative state is not at all surprising -- nor does it necessarily mean that voters don't want to change the direction of education policy. Voters in Indiana, like elsewhere, are not all "single issue voters." They choose who will get their votes for a variety of reasons -- education policy is just one.

The office of the State Superintendent of Public Instruction, on the other hand, is a single issue position. Ritz defeated Bennett on education issues alone.

Governor Daniels is using the tried and true political technique of blaming someone else for his own (or his friends') losses in order to save face or to drive a wedge between groups. It's the same way, for example, that teachers get blamed for not solving all the academic and social problems which occur in schools due to poverty. People like the governor won't accept their share of the responsibility for the huge problems facing our nation so they foist it off on someone (teachers) -- or something (the teachers union) else.

At the end of his term Daniels heads off to West Lafayette to take over as president of Purdue University. I wonder if he is going to solve problems there by using the "make excuses and blame someone else" technique... 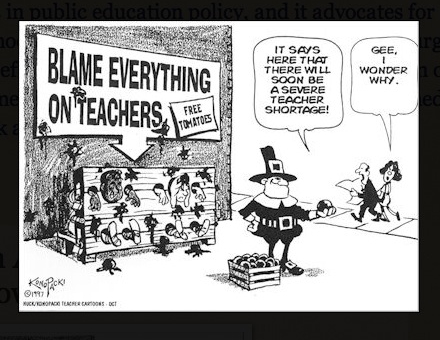