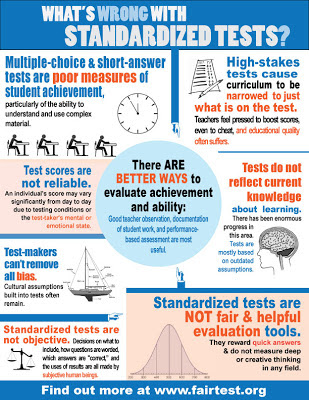 Why are we still overusing and misusing tests? One answer seems to trump all the others: Money. The more tests taken, the more the test-makers profit. The four largest test producers are raking in record profits, and here in Indiana we're spending almost $50 million a year to tell teachers what they already know.

We've been pushing back against the overuse of test since Clinton's Goals 2000 -- with little success. As money comes in to the test-maker's pockets it's transferred to lobbyists, to politicians, and legislatures find new uses for tests. No longer content with ranking children and schools based on one less-than-reliable test, it's now national policy to evaluate teachers using a measure designed for something else entirely.

We can't give up. We need to keep fighting against the overuse and misuse of testing which harms schools, teachers, children and public education in general.

It's time to end No Child Left Behind and Race to the Top. It's time to end the testing insanity and concentrate on teaching and learning. Lisa Guisbond wrote in What's wrong with standardized tests?


The federal NCLB and other state-imposed high-stakes testing policies have failed to improve our schools and, according to the National Research Council, have caused harm by increasing high school dropout rates. Our misguided national testing craze has squeezed out art, music, sports, social studies and science, even recess, and turned too many classrooms into test preparation centers. It's time for a new direction.

1. Add your voice to the nearly 14,000 individuals and 475 group (including our own Northeast Indiana Friends of Public Education) who have signed the National Resolution on High Stakes Testing.

2. Share FairTest's infographic, “What’s wrong with standardized tests?” Send it to friends...put it on social media sites...tuck it into Christmas presents...or just hand out paper copies (get a pdf of the infographic here)!

Want to know more? Visit the FairTest web site for fact sheets and other information.