The Cost of Exploration

The Mars Rover, Curiosity, is now crawling about the surface of one of our nearest neighbors in space. NASA released a picture which Curiosity took of itself...the equivalent of holding a camera in front of your face and snapping a picture. Take a look... 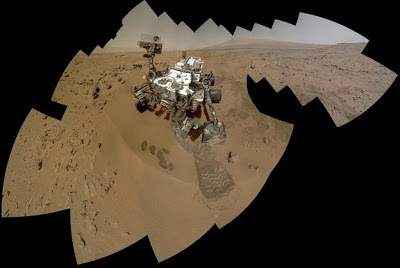 Can We Afford This?

It's estimated that Curiosity's mission to Mars (over 9 years) has cost us about $2.5 billion. Can we really afford that? Is it worth the money?

Let's put the cost in perspective. Compare $2.5 billion with the following:

The cost per American for the Curiosity's mission is about $8.00. For a family of four that's less than the average monthly cost of cell phone service ($47), even less if you have a smart phone.

We also spend around $750 billion on education, including public and private schools, from preschool through college.

We Can't Afford Not to Fund NASA

What have we gotten for our investment in the space program over the years? In an article titled Is Space Exploration Worth the Cost? a group of space experts discussed the cost of the venture...over the lifetime of America's space program.


It is true that, for every dollar we spend on the space program, the U.S. economy receives about $8 of economic benefit. Space exploration can also serve as a stimulus for children to enter the fields of science and engineering.

Apparently STEM education (Science, Technology, Engineering and Math) is important. Inspiring children to go into those areas is probably a good thing.


Is there a price to inspiration and creativity? Economic, scientific and technological returns of space exploration have far exceeded the investment. Globally, 43 countries now have their own observing or communication satellites in Earth orbit. Observing Earth has provided G.P.S., meteorological forecasts, predictions and management of hurricanes and other natural disasters, and global monitoring of the environment, as well as surveillance and intelligence. Satellite communications have changed life and business practices with computer operations, cell phones, global banking, and TV. Studying humans living in the microgravity of space has expanded our understanding of osteoporosis and balance disorders, and has led to new treatments. Wealth-generating medical devices and instrumentation such as digital mammography and outpatient breast biopsy procedures and the application of telemedicine to emergency care are but a few of the social and economic benefits of manned exploration that we take for granted.

Space exploration is not a drain on the economy; it generates infinitely more wealth than it spends. Royalties on NASA patents and licenses currently go directly to the U.S. Treasury, not back to NASA.

It seems that NASA is bringing money back into the US Treasury...not just taking it out.


Unquestionably, manned exploration of that era also created unintended economic consequences and benefits, such as the spinoff of miniaturization that led to computers and cell phones.

To be certain, tax dollars spent on space projects result in jobs — a large proportion of which are high paying, high tech positions. But many other government programs do that as well — some more efficiently.

I don't remember any of the presidentail candidates talking about stimulating the economy and helping the job market by increasing spending for NASA...


Still, for those who would moan that this money could be “better spent back on Earth,” I would simply say that all of this money is spent on Earth — it creates jobs and provides business to companies, just as any other government program does. You have to spend all of NASA’s money “on Earth.” There is no way to spend it in space — at least, not yet.

One of my favorite people, Astrophysicist Neil deGrasse Tyson talks about space exploration...

Innovations of scientific technology have been the drivers of...they've been the engines of economic growth ever since the Industrial Revolution.
The space program can be the tentpole for the entire scientific enterprise which can give manifold benefits in various different ways.

He also wrote an article for The Atlantic, How Space Exploration Can Make America Great Again. We need to educate adults about the benefits of space exploration.


Give NASA the money it needs, he argues, and the agency will stimulate the economy and inspire students to pursue innovative, ambitious projects. (Say, for example, a way to thwart a wayward asteroid that could threaten to wipe out humanity.) Continue to fund NASA at its current rate -- a shade more than $18.7 billion in 2011, or as Tyson often reminds, six-tenths of a percent of the federal budget -- and the country will lose an ongoing space race to the Chinese and European space agencies of the world.

The challenge has never been children. The challenge has been adults. I don't think you have to do anything special to get kids interested in science, other than to get out of their way when they're expressing that curiosity.


At least once a week, if not once a day, we might each ponder what cosmic truths lie undiscovered before us, perhaps awaiting the arrival of a clever thinker, an ingenious experiment, or an innoabtive space mission to reaveal them.We might further ponder how those discoveries may one day transform life on Earth.

Absent such curiosity, we are not different from the provincial farmer who expresses no need to venture beyond the county line, because his forty acres meet all his needs. Yet if all our predecessors had felt that way, the farmer would instead be a cave dweller, chasing down his dinner with a stick and a rock.

During our brief stay on planet Earch, we owe ourselves and our decedents the oppportunity to explore -- in part becuase it's fun to do. But there's a far nobler reason. The day our knowledge of the cosmos ceases to expand, we risk regressing to the childish view that the universe figuratively and literally revloves around us. In that bleak world, arms-bearing, resource-hungry people and nations would be prone to act on their "low contracted prejudices." And that would be the last gasp of human enlightenment -- until the rise of a visionary new culture that could once again embrace the cosmic perspective.

Just how has the space program benefited us? Specifics? Here are two sites with some information.


Space exploration has created new markets and new technologies that have spurred our economy and changed our lives in many ways.


...since 1990, NASA has recognized its “Government and Commercial Invention of the Year” and, since 1994, the “Software of the Year.” The following examples, shown by the year they were published in Spinoff, are merely indicative of NASA’s positive societal impact over the years.

We can't afford not to fund NASA and the space program. Looking at the list of benefits to society it's clear that most of us live in a society built on NASA's innovations. Finally, click here to see a longer list...