Diane Ravitch has a list of pro-public education victories for the year 2012 including:

Rejected:
Approved:
...and more. Read about them.


2012 was a year in which supporters of public education–parents, educators and concerned citizens–won some huge victories against the privatization movement.

Here's a good idea for everyone who works with children. Make it a point to end the depersonalization of children through test scores and "data points."


Teachers, as you plan how to resist corporate education reform and rebuild public schools on National Opt Out Day (Jan.7th) - or any day for that matter - here is one way to do it - do not allow others to refer to children based on their test scores. Children cannot be called "UnSats" or "Partials" or any other label attached to a number. 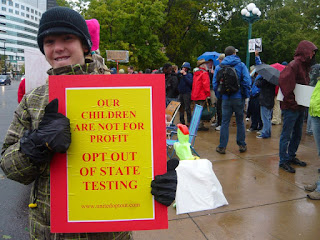 Corporate charters continue to show that the problem with education in the US is poverty.


“Charter School Performance in New Jersey,” includes a repudiation of everything that the Hoover Institute has advocated. It compares outcomes for 77% of their study's charter school students with those of their peers in traditional public schools (TPS). It finds that in four of the five major cities with the most charters (Camden, Trenton, Jersey City, and Paterson) that charter students learn significantly less than their (TPS) peers in reading, and there are no differences in learning gains in math. CREDO’s charter school advocates acknowledge that, “much of the motivation for developing charter schools aims at improving education outcomes for students in poverty," as they report that low income charter students received no significant benefits in reading.

The Selling Out of Newark's Schools: Part II

They’re among a dozen or so Silicon Valley personalities who’ve put money into Rocketship Education this year. Rocketship is a network of “hybrid” charter schools that put kids in front of computers for a large amount of the school day. Many in the education industry hope Rocketship’s model will prove Silicon Valley can disrupt (and make money in) the k-12 school system.

Here are two responses to the decision that, for labor relations purposes, Charters are private entities. The sham that corporate charters are public schools has been blown apart. They are simply private companies who divert taxpayer money from real public schools.


Now we have a decision by the board, made last month and just publicized, involving efforts by teachers at the Chicago Math and Science Academy to form a union. Teachers organized under the Illinois Educational Labor Relations Act, which regulates labor relations between public schools and their employees, with two-thirds of the teachers voting in favor, according to WBEZ.org. The private managers of the academy, however, wanted the process to be held under federal law and appealed to the NLRB, which handles labor relations in the private sector.

There is variation in how different states deal with labor issues regarding charter schools, WBEZ said. Some don’t allow charter school teachers to unionize, while others mandate that charter teachers belong to the same union as teachers in traditional public schools.

The evidence that public education is being privatized keeps mounting.

It's Official: Charters are NOT Public Schools

The next time some reformy charter cheerleader tries to tell you that charters are public schools, tell them the federal government already settled the issue:

Charters are not public schools.

The debate is over.

Boy, that privatization is working out so awesome, ain't it?

It's worth your time to follow Privatization Watch. Privatization is not just happening to public education. Other public sector services are under attack -- toll roads, lotteries, prisons, parking meters, airports, welfare benefits, vehicle driver licensing. Tax money is given to private contractors. This has always happened, of course, but when a private company owns the toll roads, for example, where is the public oversight for handing out bids for maintenance and repair? The assumption that "private is always better than government" isn't always true as we witnessed in 2008.


“[Privatization] severs the connection between public schools and the civic purposes for which they were established and that justify the use of taxpayer dollars to fund them. Implicit in this vision is the notion that the benefits of education accrue first and foremost to individuals and that public benefits are simply the sum of private ones.

“Second, it rejects the notion of an education system. Those who view education primarily as a collection of independent schools serving private interests have few incentives to assure that multiple stakeholders — students, teachers, administrators, policy makers, the business community and others — work together through democratic institutions in pursuit of common goals.

“Third, the private education vision leaves little room for principles of social justice and the commitment to equal educational opportunity for all children. By emphasizing privatization and competition rather than community and cooperation, it trivializes the whole notion of “public” education. Nor does it take responsibility for addressing the special challenges that disadvantaged children bring with them when they walk through the schoolhouse door.

Why schools used to be better

Marion Brady offers some insight into how the so-called "reform" movement has damaged education in America.


Up until this generation of kids — before business leaders and politicians took control of schooling, before No Child Left Behind, before Race to the Top, before high-stakes testing, before the drive to super-standardize, before the not-enough-rigor hysteria — a usefully descriptive word for America’s system of education was “loose.”

In that earlier era, I taught in four high schools. They differed — rural, urban, rich, poor, big, small — but on certain measures, they were alike.

...my professional judgment was respected. I was free to capitalize on what educators call “teachable moments,” free to make use of local issues, free to appropriately pace instruction, free to experiment with alternative approaches, free to adapt to a class’s distinctive “personality.” And probably most importantly, I was free from mandates directing me to try to standardize kids

...all the schools offered more elective classes than are now available

...no test-based, stress-creating fog of fear permeated the four schools


We are investing billions in new standards and tests, and there is no research indicating that this will help children. Instead, we should be investing in improved nutrition programs, improved health care, and a greater investment in libraries and librarians, a move that is well-supported by research.

We need to invest in feeding the animal, not just weighing it.

Fiction/nonfiction debate a diversion from the big question: Should we have common core standards?


The rational for the standards is the belief that our schools are "broken." There is no evidence this is true: Middle class American students who attend well-funded schools score at the top of the world on international tests. Our unspectacular scores are because US has such a high percentage of child poverty, 23.1%, the second-highest percentage among 34 economically advanced countries. High-scoring Finland has less than 5.3% child poverty.