This is a visualization of the contiguous United States, colored by distance to the nearest domestic McDonald’s. No editorial comments are necessary. 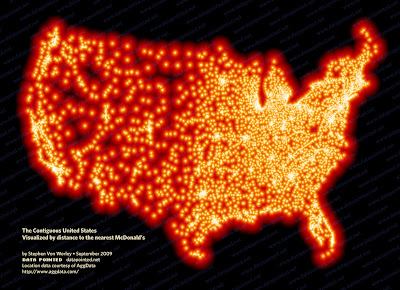 The Goal is Education


"Somewhere along the line we've forgotten that education is not about getting this or that score on a test, but it is about enlarging hearts, minds, and spirits. It's about fulfilling human potential and unleashing human creativity. It's about helping children understand that the world is a place full of wonder, truly wonder-full. It's about giving children the tools they will need to participate in a complex global world where we can't imagine today what the next twenty years, let alone century, will bring" -- Susan Zimmerman in Comprehension Going Forward

[Note: The preceding quote is also appropriate for the section in this entry titled Real Learning]


Teachers are neither mercenaries nor missionaries. They do the best they can in spite of - not because of - the salaries they receive. Reformers who have never taught do not understand what motivates teachers. I don't think they ever will. All the more reason to be skeptical about "innovative" merit pay plans. -- Walt Gardner 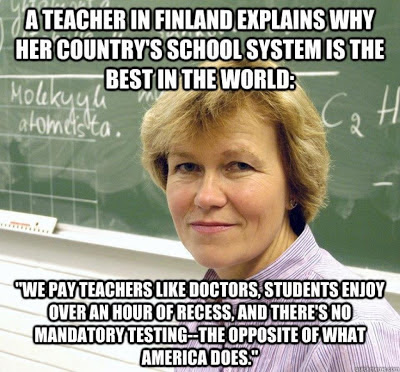 I started volunteering the year following my retirement. I worked with some first grade students. I still volunteer at a local elementary school and work with first graders and third graders. I still refer to them as "my kids" even though their classroom teachers surely do as well. I'm grateful to their classroom teachers for sharing them with me.

I reconnected with a group of my former students last month. Some were from my very first class of third graders -- school year 1976-77 (my first full year of teaching). They're all older than my oldest child, but I still call them "my kids." 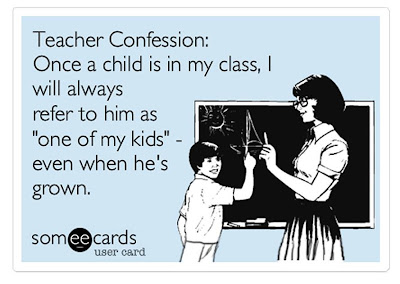 Look at this answer from a second grader. Instead of a simple score of "right" or "wrong" this question could be used as a teachable moment exploring the use of plurals (shape vs. shapes), drawing three dimensional objects on a two dimensional medium (drawing a rectangular prism), or simply reading comprehension. Any one of those would be a valuable use of the test. 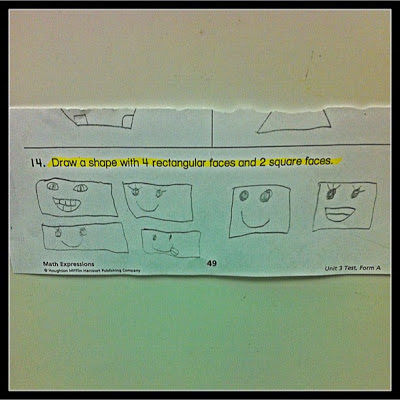 Real evaluation of student learning yields the opportunity for immediate feedback, diagnosis and reteaching, and extended learning, not shaming, blaming and punishment. 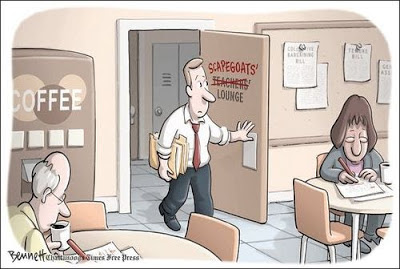 Educating children to be productive citizens entails more than just teaching them to read or cypher -- or pass a standardized test. As Bloom's Taxonomy teaches us, learning is more than just remembering and understanding. We need to help students learn to apply knowledge, analyze products and processes, evaluate what they see and hear, and create new ideas.
Where do the words in the picture below fit into Bloom's Taxonomy? Those are the words which describe educated humans...none of them are measured by standardized tests. 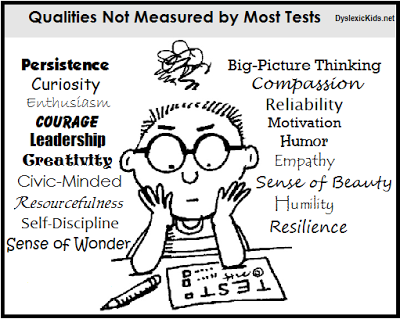 Proud to be a Teacher

Before Sandy Hook bashing teachers was a full time job for some politicians, pundits and policy makers. The respite will last until the short national memory moves on to the next crisis.

Public employees, since the time of Benjamin Franklin, have been an important part of a free society. Franklin started the first fire department and the first library. He improved the post office and understood that government had a role to play in the health and safety of the people. He understood that everyone needed to pay their societal membership dues -- in the form of taxes -- to support those who worked for the public good...teachers, police officers, firefighters... 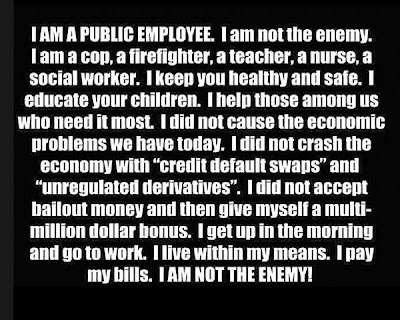 Fight the Sources
Don't Simply Blame Those Who Try to Help

Teachers and other school personnel work with the students they have. Factors outside of educators' control have an impact on student learning... 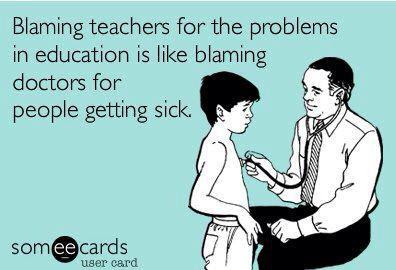 Mr. Fitz is a middle school teacher in Florida. He draws this daily cartoon. Check out his web sites...support him in any way you can. We need his voice.

Mr. Fitz reacts like most teachers to the overuse of testing, lack of support for public schools, and privatization.

Arne Duncan doesn't know anything about teaching in a regular public school. He has never taught, he has never attended a public school, he has no experience in education other than his failure to improve student achievement (while increasing charters and closing schools) as the CEO of Chicago Public Schools. He doesn't deserve the position of the nation's top public educator.

I've never advertised a product on these pages before...and I can't vouch for the quality of those below...however, the idea of these two items appeals to me. I know that I could have used them when I was teaching...for my students and myself!!

The first is a Powerpoint file you can use to print bracelets. I'll assume that you can get the labels somewhere. Click the picture for the link... 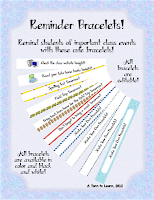 Here's the same idea from the people who make sticky notes. Again, click the picture for the link. 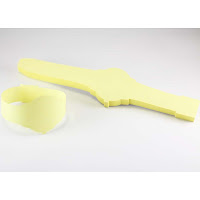 Support Public Schools is a Facebook group. Their description:


Politicians, industry leaders and the media are trying to destroy Public Education by vilifying public school teachers. Students and teachers should not be judged on one standardized test score. Teachers, parents and students need to band together and let their officials know they must stand up to the attacks on public schools.

Show your support for Public Schools and the dedicated teachers of America's public school system by joining this page.

An end of year posting...


While RTTT and the Reformers including testing companies like Pearson have worked to destroy public ed this year, there have been some major victories. Feel free to add any I left out :)

#5 Tony Bennett thrown out of Indiana. (Unfortunately Florida has him now)
#4 Florida Parents take on Jeb Bush and the Parent Trigger Law and win!!! (Let's hope they can do it again in 2013!!)
#3 Protests against the film "Won't Back Down" and horrible reviews made this film the worst box office flop in history!! (The American public knew it was total propaganda!!)
#2 A small group of Hawaiian Teachers take to the streets and now over 100 schools are participating!! (Hopefully it will become statewide and many teachers and parents will show up to the rally in Honolulu.)
#1 Chicago Teachers Strike!! Karen Lewis emerges as a hero!! (Rahm Emanuel fell of his pedestal.) 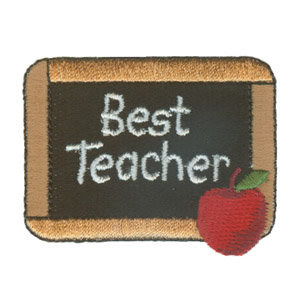