Equity in Public Education, Testing,
Evaluations, Data, Those Who Can...Teach.
EQUITABLE PUBLIC EDUCATION FOR EVERYONE

Katie Osgood: Choice or Equity -- You Can't Have Both

Katie Osgood asks the questions and gives the answers which must be given for education to become equitable in the US. The "reformers" aren't interested in equitable education. They want the private sector to take it over...for money...on principle...for whatever reason. We can't allow them to succeed in privatizing public education.

[reformated from original to highlight questions and answers]


...This vision of schooling is what the Chicago Teachers Union went on strike to create. It is indeed possible to achieve this seemingly utopian model of education. The CTU has discovered numerous ways to create the schools all children deserve.
But it will not happen without a struggle.

Teachers are singled out as being responsible for school "failure." Pundits, politicians and policy makers need to accept responsibility for the conditions which lead to student failure.


The publicity given to the latest Gates Foundation report on teacher evaluation [“Gates: Test scores not enough for teacher reviews,” seattletimes.com, Jan. 9] adds strength to the common view that there is something very wrong with American teachers. There is, for example, no pressing concern about how we should evaluate nurses, carpenters, doctors, dentists, lawyers, engineers, plumbers, butchers, newspaper reporters, etc.

Every profession has some inferior practitioners, but the available evidence says that American teachers as a group are excellent. When we control for the effects of poverty, our international test scores are very good, ranking at or near the top of world.

The Great Stuff In Public Schools That Tests Can't Measure


Do you reformy types still want to try to convince me that our public education system is a failure? A system that produces outstanding, upright, decent young people like this?

Do you really think any stupid bubble test put out by some corporate education provider can capture the true learning that happened that day in New Jersey? That some stupid question about pineapples and rabbits is more important than the character these beautiful young people and their teachers showed this day?

You people who constantly bemoan and mock the "achievement" of our children need to step aside in shame. These kids - and their teachers - are far better people than you will ever be.

Michelle Rhee needs to be held accountable for the cheating which went on in the DC Public Schools under her so-called leadership.


Last week, she released a statement concluding there was “no evidence of widespread cheating” on D.C. tests from 2008 to 2010. Her proof? A series of superficial investigations, the parameters controlled by D.C. school brass, that never called on the expertise of psychometricians, never dug into the data, and lacked any reasonable explanations of how such erasures could have been made by anyone but adults.


Over the past year, there's been a steady and ongoing revolt in Texas. Not about secession or guns or the many other fringe topics that the state is usually associated with. This battle has been waged primarily by parents and teachers, and the demand is relatively simple—cut back on testing our kids. There's been similar sentiments simmering in states across the country, but in Texas a new set of tests, put in place last year, sparked the outcry. Now, the push that began in school board and PTA meetings has finally reached the halls of power...

...Texas’ shift on testing could well have national repercussions. After all, it did more than any other state to bring the country into an era of Number 2 pencils and filling in bubbles. It might also be the state that leads us out.

Teachers in one Seattle high school have said enough is enough. High stakes tests do not improve achievement.


• Seattle Public School staff has notified us that the test is not a valid test at the high school level. For these students, the margin of error is greater than the expected gain. We object to spending time, money, and staffing on an assessment even SPS agrees is not valid...

• We are not allowed to see the contents of the test, but an analysis of the alignment between the Common Core and MAP shows little overlap. We object to our students being tested on content we are not expected to teach...

• Even the NWEA itself, the parent company to MAP, has advised districts to carefully restrict the use of the test and its results. NWEA also cautions to ensure 100% random selection of students enrolled in any course if the test is used for evaluation and to take into consideration statistical error in designing evaluation policies. NWEA says that problems become “particularly profound at the high school level.” None of these or other criteria urged by NWEA has been met. We object to being evaluated by a test whose author suggests extreme caution in its use and warns against valid legal action if the test is used in personnel decisions...

Related: The Impact of the Measures of Academic Progress (MAP) Program on Student Reading Achievement


The results of the study indicate that the MAP program was implemented with moderate fidelity but that MAP teachers were not more likely than control group teachers to have applied differentiated instructional practices in their classes. Overall, the MAP program did not have a statistically significant impact on students’ reading achievement in either grade 4 or grade 5.

Kasich Pulls a Fast One

Governor John Kasich of Ohio is in the same class as Wisconsin's, Florida's, Michigan's, and other governor's throughout the country. Their goal is to privatize the public sector. Kasich and Ohio has joined the growing list of states using invalid and unreliable methods to evaluate teachers.


HB 555 radically changes the method of calculating evaluations for about 1/3 of Ohio’s teachers. If a teacher’s schedule is comprised only of courses or subjects for which the value-added progress dimension is applicable – then only their value-add score can now be used as part of the 50% of an evaluation based on student growth. Gone is the ability to use multiple measures of student growth...the rules of the game [have] changed at the 11th hour...the growing list of research that demonstrates the very real and serious problems with heavy reliance on value-add, and the need to offset these problems by using multiple measures of student growth.

John Kasich et al, should read this report from the American Institutes for Research. You'll find the entire report HERE.


"We cannot at this time encourage anyone to use VAM in a high stakes endeavor. If one has to use VAM, then we suggest a two-step process to initially use statistical models to identify outliers (e.g., low-performing teachers) and then to verify these results with additional data. Using independent information that can confirm or disconfirm is helpful in many contexts. The value of this use of evaluative change results could be explored in further research efforts….”

Datapalooza at the U. S. Department of Education

Check out the list of speakers at the "Datapalooza" --  not one practicing teacher among them. Duncan's blog said, "...imagine an easy-to-read virtual dashboard for parents to track the academic performance of their children." Academic performance is, of course, standardized test scores.


It turns out this U. S. Department of Education was following in the footsteps of a White House-sponsored Health Datapalooza and Energy Datapalooza. I'm waiting for the White House extravagant party where a plethora of concerned citizens talk about the dangers of the overweening government worship of data. 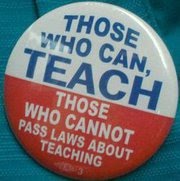 Teachers know more about teaching than pundits, politicians and policy makers. Yet the laws and rules of public education are being made in board rooms and business offices. 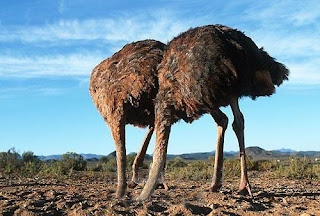 You mean we shouldn't just accept everything that comes from the Gates Foundation?