In Indiana's last election, Glenda Ritz defeated incumbent Superintendent of Public Instruction, Tony Bennett. Bennett is a nationally known "reformer" who was instrumental in bringing vouchers and corporate charters to Indiana. (After he lost his job in Indiana, Florida hired him to be their Commissioner of Education.) 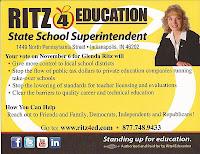 When the votes were counted Glenda Ritz had received 1.3 million of them and had beaten Bennett.

Unfortunately for the voters of Indiana, Newly elected Superintendent Ritz is being stifled in her desire to implement some of the changes which they, the voters, approved by her election...even before she begins.

One of Bennett's last acts as outgoing superintendent was to lead the State Board of Education in the adoption of REPA 2, a plan which actually lowers requirements and qualifications by which someone becomes a teacher or school administrator in Indiana.

So much for high standards for educators.

In addition, the people who, through their votes, spoke loudly their objection to the Bennett-led education initiatives (apparently) didn't stop to think that the laws weren't made by Bennett...but by the legislative and executive branch of the state government. Not only did Indiana voters elect an anti-public education governor, not only did they return the anti-public education majority to both houses of the legislature, but they increased the number of those legislators who now have a super-majority in both houses. In other words, voters elected Ritz based on education issues, but failed to support those same issues in other election races. In that way, Tony Bennett may have lost in Indiana, but his policies won a clear and powerful victory.

Now that her opponents have a super-majority in the legislature and continued occupation of the governor's office, Superintendent Ritz is feeling the push back directed at her for defeating Bennett.

House majority party members wasted no time in introducing bills which would reduce the strength of the office of Superintendent.


House Bill 1251, which would remove the requirement that at least four members of the State Board of Education be actively employed in Indiana schools and hold a teaching license.

Another bill, HB 1309, looks like a clear effort to marginalize Ritz. Sponsored by House Education Committee Chairman Robert Behning, an Indianapolis florist, it requires the State Board to elect a vice chairman who:

1. Presides over meetings in the absence of the state superintendent of public instruction; and

2. May call meetings, set and amend agendas, arrange for witnesses, and carry out other administrative functions related to the meetings of the state board.

...Handing the authority to call meetings, set and amend agendas, arrange for witnesses and carry out other administrative functions to one of his appointees is clearly an end-run around the Nov. 6 election results.

The Poor Get Poorer

The budget from the governor's office offers an increase in education funding...for those schools which "show improvement." Here, the phrase, "show improvement," means nothing more than increasing test scores. The idea of rewarding schools which improve test scores will increase gaming the system and outright cheating. It denies the fact that outside forces have any impact on the educational achievement of children. It is the exact opposite of what needs to be done...which is to provide more resources to help schools where children are struggling. Instead, the Governor is choosing to punish those schools and children.

Anyone who read Governor Pence's stance on education would have realized that this would be his direction. His campaign web site and information about education clearly implies more reliance on testing ("Improving the math and reading skills of elementary students"), using test scores to evaluate teachers and schools ("increasing rewards for great schools and great teachers"), and more money for corporate charter schools and vouchers ("Support expanded choice"). This was no stealth campaign. His position was clearly to continue the legacy of Tony Bennett.

So much for more teaching and less testing.

Indeed, one of the first things on the legislative majority's agenda was to increase the amount of public money spent on private schools by changing the rules about vouchers. Glenda Ritz may have been elected by voters who wanted to "reserve public dollars for public schools," but those same voters elected a super-majority of legislators who want to fund private and parochial schools with public dollars.

Pence's platform included more "choice" -- the buzz word for giving public money to private corporations through charters and parochial schools through vouchers. So did his party's platform which applauded the previous legislature's success in passing (Bennett's package of) "opportunity scholarships for thousands of Hoosier school children, teacher merit pay and accountability; and the expansion of charter schools." The current platform calls for more of the same.

So much for reserving public money for public schools.

Superintendent Ritz can't change the laws. She can't fight the governor and the legislature alone. She can't fulfill her campaign promises which the voters approved, when those same voters slammed the door in her face through their choices for legislators and executives.

Which way does Indiana want to go? We won't know until the next election. In the meantime, Bennett's policies are alive and well in Indiana.

If you live in Indiana follow what the legislature is doing on education issues and contact your legislator regularly. Let them know that you want
[UPDATE: See If You're Not Outraged, You're Not Paying Attention at the blog of the Indiana Coalition for Public Education--Monroe County and South Central Indiana.]