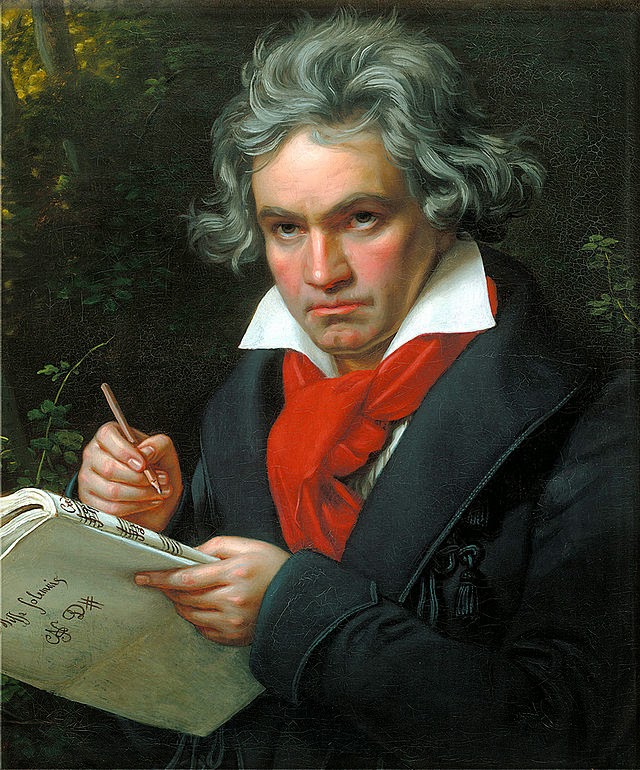 I posted this video two years ago. See that entry for credits...

Today, December 16, 2014 is Beethoven's 244th birthday. The Ninth Symphony, from which this Ode to Joy was taken, was completed and premiered in 1824. By that time Beethoven was completely deaf.

His early fame was earned as a pianist as well as a composer, but as his deafness increased he could not hear himself play and turned to composing full time. When composing the Seventh Symphony he pressed his ear against the wooden piano in order to hear. By the time he composed the Ninth Symphony, he could hear nothing. It's ironic that the composer himself never heard one of his greatest works. At the premier of the Ninth, he had to be turned around to see the crowd because he could not hear them cheer and applaud.

Would Beethoven have approved of this sort of performance? Possibly. He was very particular about his music and was known to become very angry when people weren't paying attention. However, this performance shows just how much the music draws the attention and interest of a random group of citizens. He was irritable and unpleasant as his deafness made his music more difficult for him to enjoy, but I would like to think he would soften enough to appreciate seeing people enjoy his music.


If you're interested, the link below will take you to a video of an emotional performance in 1989 of the Ninth Symphony (1:33:51). The performance is conducted by Leonard Bernstein (less than a year before his death in October of 1990) in the former East Berlin, in celebration of the opening of the Berlin Wall. It includes curtain calls, dozens of flowers and 8 minutes of standing ovation.

This is great, Stu!