Things have changed, however. The waiting for superman concept of the superiority of charter schools has given way to reality. Charters don't do a better job of teaching children than do traditional public schools. Charters lay claim to public money, but aren't really public schools.

And today's topic...charters don't accept every child...they manipulate their population so that they can eliminate those who are difficult or expensive to educate. They suspend and expel students at a higher rate -- instead of figuring out ways to deal with difficult students. 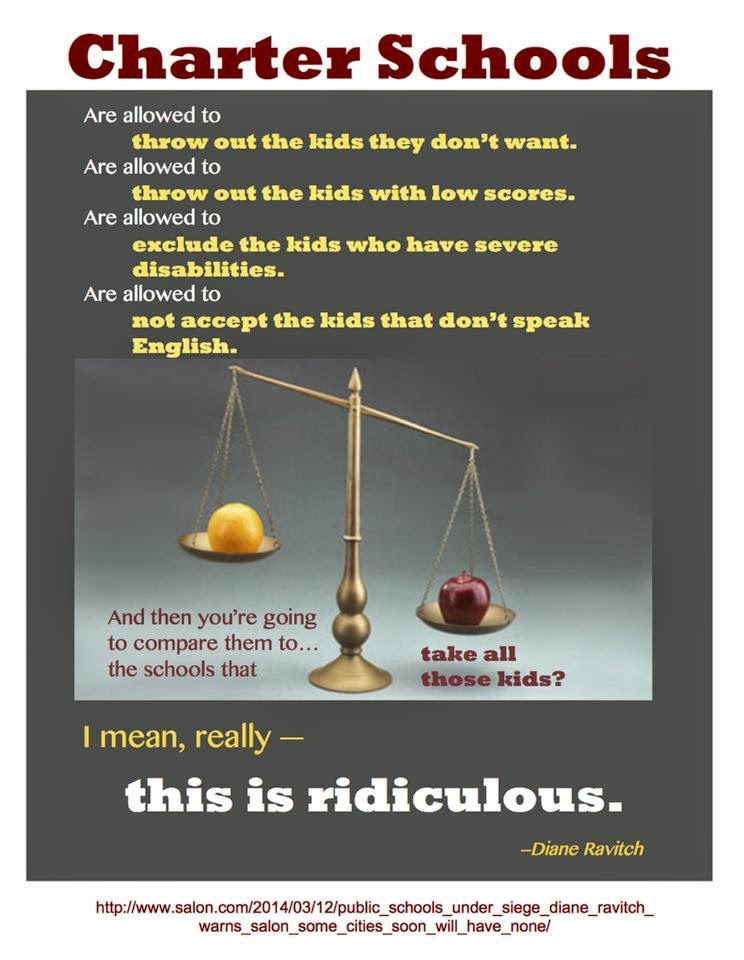 Since they can no longer deny these truths, charter supporters have had to change their tactics. Michael Petrilli, the president of the Thomas B. Fordham Institute, has taken the lead.

The fact that charters selectively skim students, according to Petrilli, is a "feature, not a bug."


It’s not too strong to say that disruption is classroom cancer. It depresses achievement and makes schools unpleasant, unsafe and unconducive to learning.

Because of such unpleasantness it's ok for charter schools to get rid of the "cancer" of disruptive students rather than figuring out what to do with them.

This "feature" of charter schools, according to Petrilli, allows them to send those rotten kids back to public schools where they will drag down the test scores of the kids "left behind" rather than damage the achievement of charter school students.

Rather than taking away the option to get rid of low achieving, and difficult or expensive to educate students we must allow charter schools to maintain these "tools" in order for their students to succeed.


We need to think long and hard about taking tools away from schools — especially schools of choice — that allow their students to flourish.

I'm reminded of the "no excuses" hammer which "reformers" wield against those of us who recognize that poverty is the number one cause of low achievement. We are told that poverty shouldn't be an excuse...and demographics isn't destiny. It sounds to me like Mr. Petrilli is making excuses...saying that it's ok to use the "excuse" of disruptive behavior to eject students and make life easier for the adults in the school. Instead, charter schools, like real public schools, ought to adjust the curriculum, teach the child rather than the test, and adapt, so that all children can succeed.

Mr. Petrilli, if you choose to restrict access to your school so that some students (read: undesirables) are excluded, then you shouldn't receive a dime of the taxpayers' money. Charter schools (and voucher accepting schools, this means you, too) that can't or won't deal with the problems students bring with them shouldn't be allowed to operate using public funding. Taxpayer dollars should go to a single, fully funded, public school system where all students are welcome.


"So our classes were filled with the kids Petrilli calls a "cancer." He likes to refer to rocket science. It's not rocket science to know that if we kick kids out of school, their problems will just intensify. . . and, in the end, become terrible societal problems.