Governor Pence has decided to close down the divisive Center for Education and Career Innovation through the same executive decree he used to start it up. In his words,


Someone has to take the first step to restore trust and harmony,

For Governor Pence to claim the high road as the first to offer peace is like a mugger who seeks approval because he beat you up, stole your wallet, but was kind enough not to stab you in the neck. 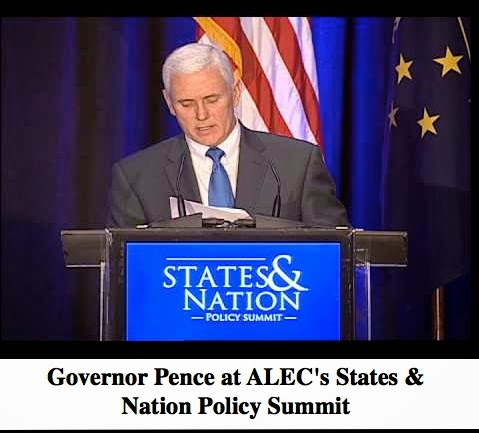 For two years the Pence run state school board and the CECI have been bludgeoning Superintendent Ritz. Now he decides to be "conciliatory," knowing that he can get the rest of his agenda through legislative fiat. All he really needs, after all, is legislation which removes the State Superintendent of Public Instruction from the chairmanship of the state board...and eventually from having any influence over education in the state. Once Ritz loses her leverage as chair of the State Board of Education, she becomes just another member of the board which consists of ten members representing politicians and one representing "the people."

In his proposal, Governor Pence said,


We will propose adjust funding for public charter schools that will allow more communities in Indiana to offer more choices for families and their kids, and attract more investment for education innovation in Indiana — investment that frankly is currently going to other states. And, we will improve the largest school choice program in America by lifting the cap on the dollar amount for vouchers and supporting efforts to raise the cap on the choice scholarship tax credit program.

Charters in Indiana -- as elsewhere -- don't do a better job than traditional public schools. The nations most expansive voucher program sucks up tax money which should be used for public schools and it isn't saving the state any money as promised. It isn't improving education as promised. Education reform in Indiana is a simple redistribution of public money from the taxpayers' pockets to churches, edupreneurs and charlatans.

The governor could just has easily have said,


"We'll continue to do all the things we're doing which have no research basis in order to transfer tax money to our donors, destroy the teaching profession, crush those irritating teachers unions, and end the scourge of public education in Indiana once and for all. "

Charters, vouchers, merit pay...I would expect nothing less from this governor. I don't doubt that if you lift up the rock Pence and his friends are sitting on you'll find a nest of slugs and grubs with names like Walton, Gates, and ALEC.

Bosma and crew are correct. This is EXACTLY what the people of Indiana have chosen.